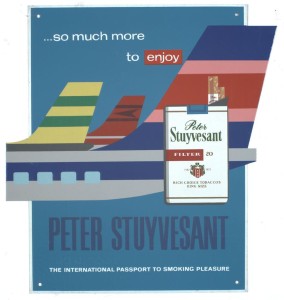 Oh, that Peter Stuyvesant. He was all about luxury, high class athletic sport and international travel. The Concorde! Monte Carlo! Caviar! 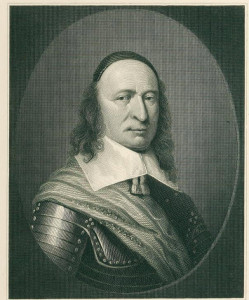 Less than three centuries after the iconic Dutch director-general of New Amsterdam died at his palatial farm in today’s East Village, his name was employed to sell a brand of stylish, premium cigarette, still enjoyed today by smokers in Australia, New Zealand, South Africa and other counties, most being places Peter Stuyvesant had no idea existed.

The cigarette was developed by a German company in the 1950s and soon became associated with an international sensibility due to its ‘American blend’ of various tobaccos from different countries. “The smell of the large far world: Peter Stuyvesant” went the slogan in 1958. It was test marketed in New York in 1957. Stuyvesant was not the only Dutch historical figure to make his cigarette debut that year; Rembrandt cigarettes also hit the streets of New York that year.

“Stuyvesant people having fun!” went the jingle, accompanied by rigorous activity that might prove challenging for those enjoying one too many of their advertised product:

The company even experimented with Peter Stuyvesant travel agencies in some places, clever ways to advertise their cigarettes in places with strict advertising laws.

The cigarette embodied the American ideal, a distillation of glamour, capitalism and excess, ‘further testimony to the adoption by European of American dreams’, according to author Alexander Stephan.  “Feel the Big Apple beat!” went this promotion in 1985. “It’s fun! It’s fabulous! It’s fast!”

Not that Stuyvesant cigarette executives turned their backs to the promotional opportunities provided by the fight for freedom and human rights. In 1989, employees in ‘Come Together’ shirts distributed Peter Stuyvesant cigarettes to East Berliners on their way to the vote in the election that would unite the former Soviet sector with West Berlin.

Here’s an older ad for you German speakers!

Tomorrow, the Bowery Boys will return to the world of Peter Stuyvesant in our newest podcast.

3 replies on “Peter Stuyvesant is also a cigarette, the “international passport to smoking pleasure””

Peter Stuyvesant seems to be the brand of choice with almost everyone I know here in Australia who still smokes!

Now if only Robert Moses had a brand…

I am a customer for about 30 years in cigarettes stuyvesant red without having any problems. But day before yesterday I bought a package from a store and instead of 22 cigarettes , had only 20