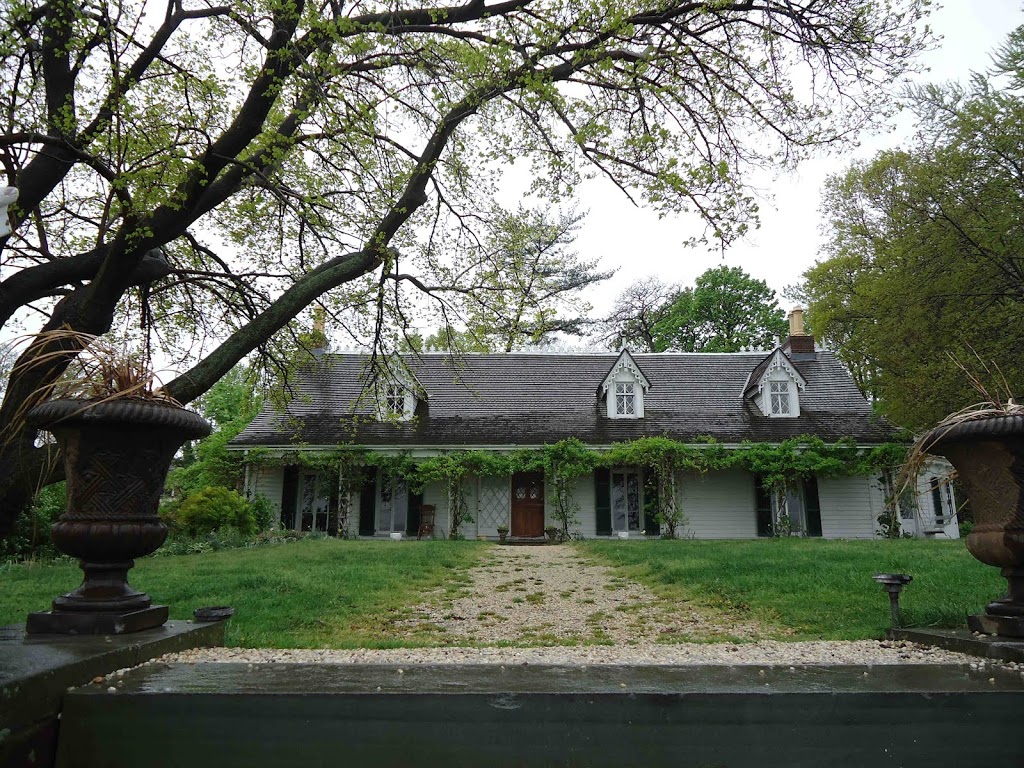 FOR YOUR CONSIDERATIONÂ Until May 21st, you can vote every day in theÂ Partners In Preservation initiative, which will award grant money to certain New York cultural and historical sites among 40 nominees. Having trouble deciding which site to support? I’ll be featuring on a few select sites here on the blog, providing you with a window into their history and hopefully giving you many reasons to visit these places, long after this competition is done.Â


Historic Site: The Alice Austen House
On the banks of Staten Island’s eastern shore sits a worn but elegant cottage, where once lived a woman of modern artistic gifts that just a few decades earlier would have been considered magical.

Alice AustenÂ was a photographer of sublime ability, in an era when the artistic potential of photography was still being assessed. She’s the sort of historical figure whose life could easily be overlooked. In fact, it was, for almost half a century. Her existence at times seems sequestered, in a habitat of old wealth, her universe principally residing in a borough that itself sometimes gets unfairly disregarded. In some ways, it’s the Alice Austen House, in Rosebank, Staten Island. that keeps her legacy in the conversation — as a revolutionary artist, an enigmatic social eccentric and a famous New Yorker.

Portions of this curious house — named Clear Comfort, but readily known today as the Alice Austen House, after its most famous resident — can be traced to a modest one-room structure built in the 1690s, when Staten Island (or, as the British preferred to call it, Richmond County) had only about 1,000 residents, mostly Dutch farmers. Â From the windows of the original farmhouse, the residents might have seen the British, using Richmond as a base, attacking Washington’s forces on the opposite shore in Brooklyn in August 1776. 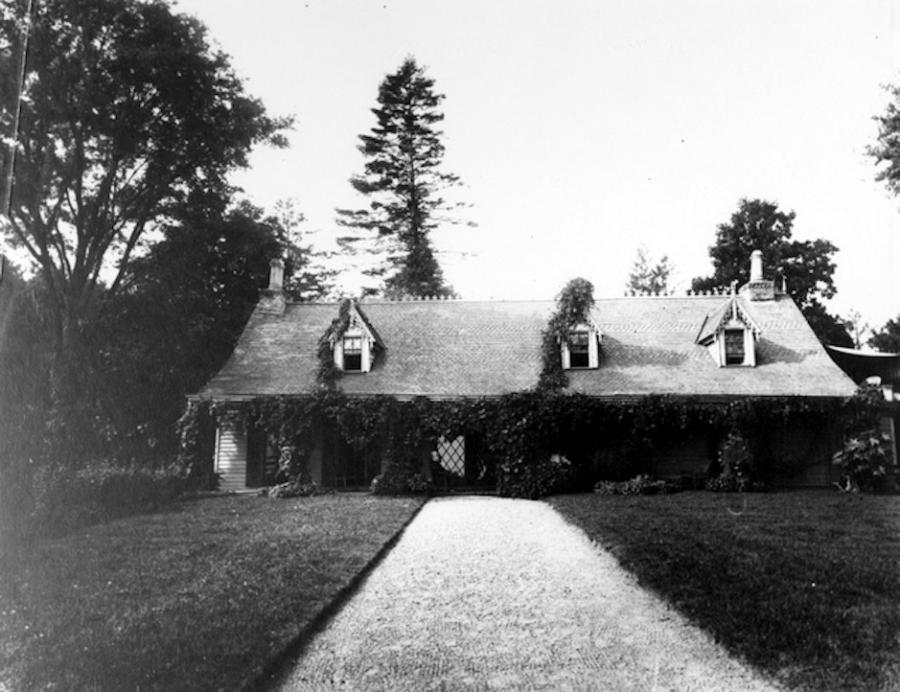 By the early 19th century, the house shared the northeastern shore with a smattering of ferry docks, including one owned by an ambitious young periauger operator named Cornelius Vanderbilt. Â As New York grew to become a busy port city and a capital of wealth, some prominent residents flocked to the Staten Island shore for respite. Moguls, businessmen, socialites, even Vice Presidents (Daniel D. Tompkins) built lavish homes a short carriage ride away. 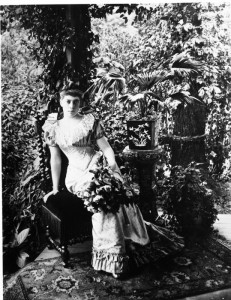 That this shoreside Dutch farmhouse survived to even this point in history– hogging a view of the Narrrows that any mansion builder might envy — is extraordinary. As a later history of Staten Island dramatically put it, “[I]t is a relief to the more conservatively inclined to find in Greater New York a house that still defied the sword of the destroying angel….One of these, which for centuries has defied destruction, is the Austen homestead.”

In 1844, a lower Manhattan dry goods merchant John Haggerty Austen purchased the old Dutch house, dilapidated but still desirable due to its view of a harbor clogged with ships. Austen greatly expanded the property into a Gothic revival summer cottage worthy of an old European fairytale. Soon, several members of the Austen clan lived here year-round. And in 1866 they were joined by Austen’s unmarried daughter and her small infant Alice.

The pair had been abandoned by Alice’s father, a situation one might normally consider dire in the mid-19th century. However the Austen family doted upon the child, and their wealth provided a cushion for the girl to pursue her ever bolder ambitions in comfort.

Above: Alice Austen in a self portrait on the porch of Clear Comfort, 1892 [source]

The first camera came to Clear Comfort in 1876, the present of Alice’s uncle, Oswald Muller, a Danish sea captain who demonstrated the bulky, wooden device in the Austen garden. Alice became immediately fascinated, and, although it was certainly unladylike in the Victorian era for a young woman to hunch in front of a large wooden tripod, her talents soon became evident. Another uncle, a chemistry professor, guided her through the development process, and an upstairs closet was eventually transformed into her own personal darkroom. In this dank, inconspicuous room, Austen patiently developed some of the most beautiful pictures of old New York ever taken. 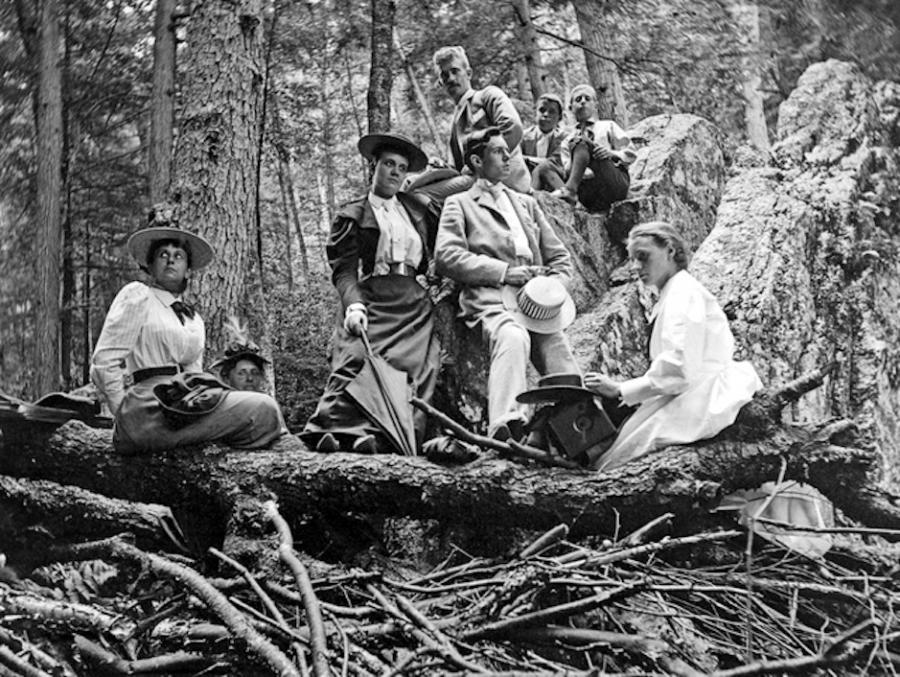 
A THOUSAND WORDS
Alice Austen was not a professional photographer. She did not get paid to document the world or to hover over developing chemicals. She took pictures because she loved it.

The photographic process before the 1890s — before the introduction of camera film — was a complex and frustrating production.Â The pursuit of leisure photography, capturing casual, outdoor scenes using a portable camera, was a relatively recent phenomenon.Â And a camera was only ‘portable’ in the sense it could be used outside a studio. A wooden-box camera with a tripod and a satchel of delicate lens and exposed plates would have been difficult to transport.

Below: The Staten Island Cricket Club in St. George, in 1893, employing the sort of subject framing that would typify art deco photography a couple decades later. 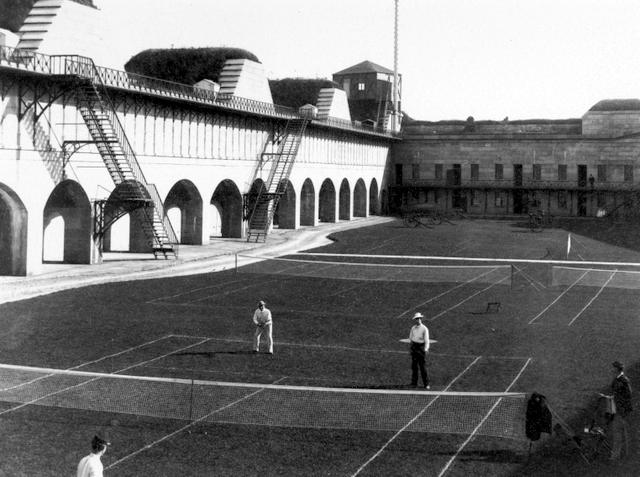 Alice’s first images were taken at home, on the grounds of Clear Comfort. Â From here she developed the poise, the skill and the guts to take the camera on the road — around Staten Island, along rocky mountainous areas and winding trails. And eventually, to Manhattan itself. What a sight it would have been to behold young Alice Austen on her bike, weaving through the streets of Manhattan with her equipment strapped to the back.

What comes through from her photography is a zest for life rarely documented in images of the era. Due to the conventions of the photographic process, subjects had to stand still or risk being rendered a ghostly blur. Equally important, people rarely knew how to pose. But in the world of Alice Austen, frivolity overrides stiffness. Austen documented her social circle with a provocative candidness, allowing her subjects to goof around, create visual gags, even cross dress.

My favorite of all her images finds Alice herself posing awkwardly with a group of men at a mock tea party. What are they doing? This picture presages a billion future Facebook photographs of people acting in a nonsensical fashion. 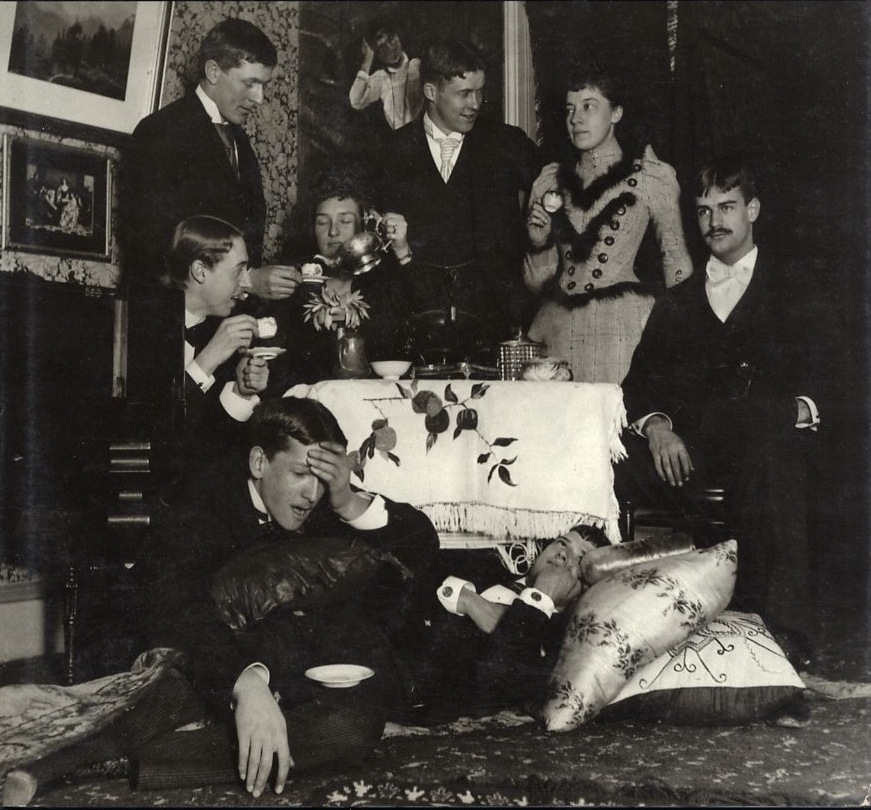 On the streets of New York, Austen found composure and beauty in common situations. More stunningly, she found it among lower class subjects — bike messengers and street urchins, rag pickers and fishmongers. Most likely, she knew ‘proper’ New Yorkers would never have posed so spontaneously for her.Â Perhaps her choices were informed by contemporary New York photographers of the day, people like Lewis Hine and Jacob Riis, who chose the same subjects but for more social reformist purposes.

In 1896, Alice stopped a messenger boy on the street to create a masterpiece of composition and form. She would do the same with policemen, postmen, even street sweepers. (NYPL) 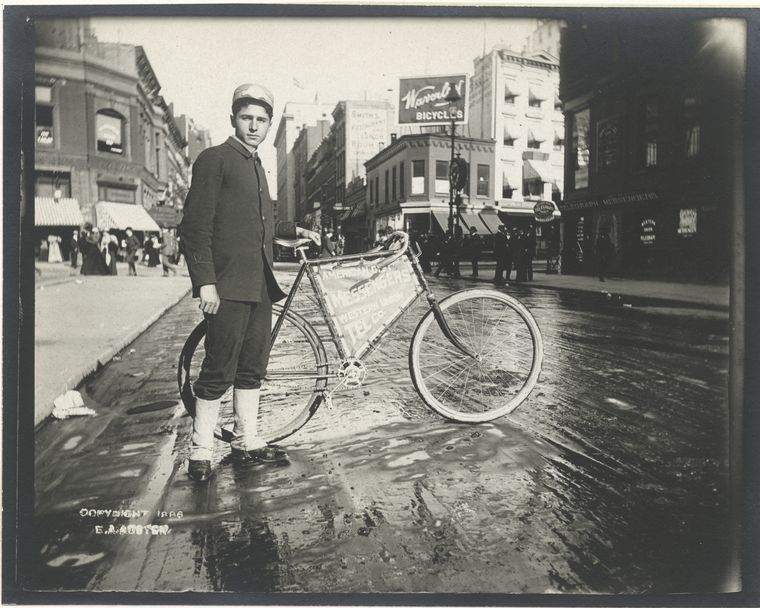 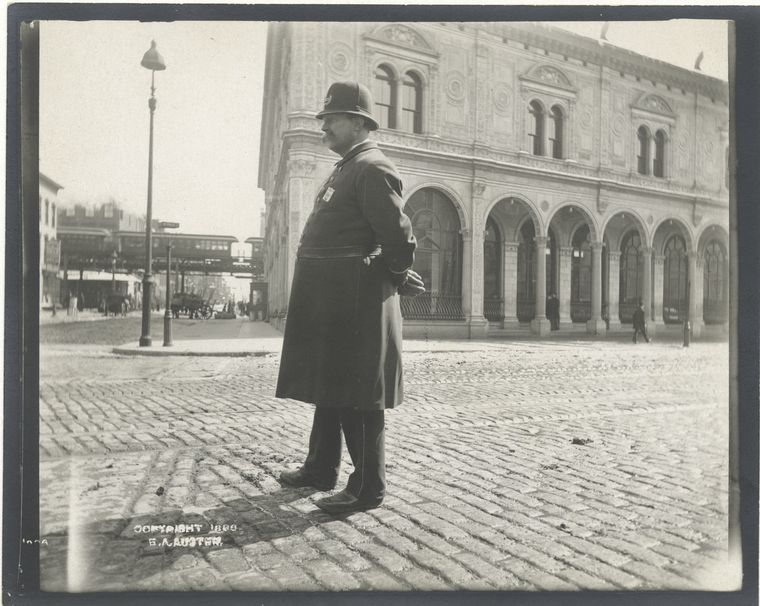 Her travels took her around New England and even to Europe, but she always returned home to Clear Comfort, and her house and the Narrows framed beautifully in front would remain her most popular subjects.

ALICE AND GERTRUDE
Alice Austen is also an important figure in gay and lesbian history, although she might have recoiled from the word ‘lesbian’, a term which seemed to apply more to the debauched female bohemians of Greenwich Village than an old-money doyenne living in a seaside cottage. In 1899, she met Brooklyn school teacher and dance instructor Gertrude Tate and began a companionship that culminated in 1917 when Gertrude, over objections from her family, moved into Clear Comfort with Alice.

Yes, another female power couple named Alice and Gertrude. Although unlike the Parisian bon vivants of the day, the true relationship led by Austen and Tate continues to remain closed to the world. They were companions for the rest of their lives, even through the troubling trials that would soon befall the residents of Clear Comfort

She had survived this many years quite comfortably on the interest from her grandfather’s wealth. But the Great Depression wiped out most of the family finances. Austen resorted to opening her front yard as a tea room, and when that failed, she mortgaged the house and sold off most of her possessions. Fortunately in 1945 she confided her glass plate negatives to Loring McMillan at the Staten Island Historical Society — although she expected to get them back!Â (McMillan would later be instrumental in the creation of Historic Richmond Town as aÂ repository of some of the borough’s oldest, most famous structures.) 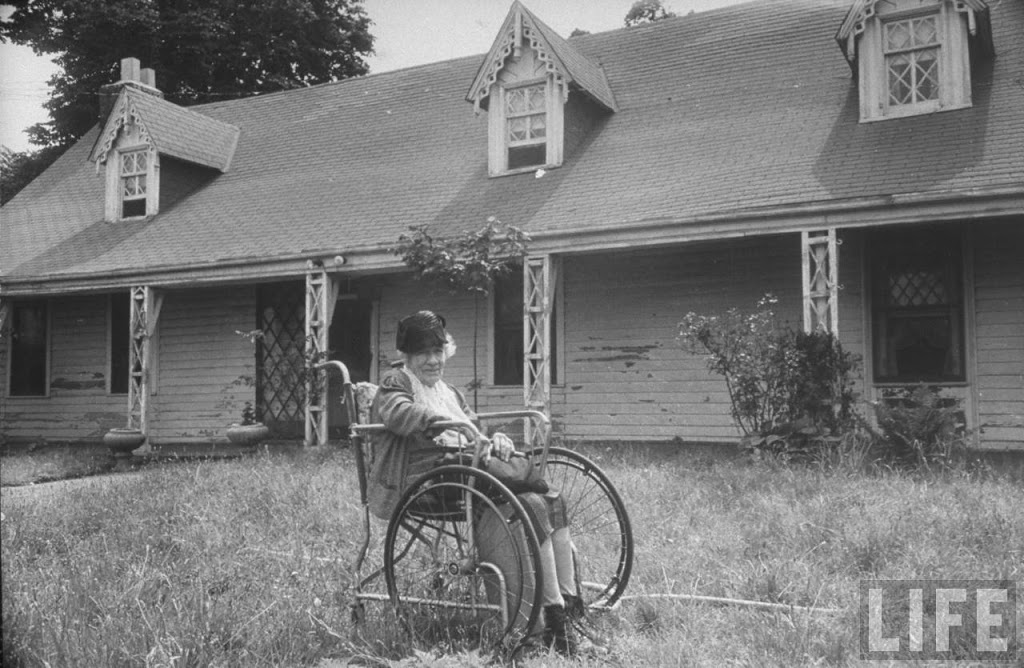 Above: For a Life Magazine article in 1951, Austen was reunited with her tattered old home.

Alice Austen has the rare distinction of being rescued herself by a historical preservation society. Â Even as situations became so dire for her in 1950 that she moved into the Staten Island Farm Colony, a pauper’s retreatÂ in Sea View, the Staten Island Historical Society began work with a publisher to publish her photos, most seeing light for the first time in decades. From the proceeds she was able to spend her final years in a private nursing home, the subject of magazine articles and belated tributes. She died in on June 2, 1952.

Gertrude outlived her by ten years. Her request to be buried next to Alice was not honored by her family.

PRESERVING THE IMAGE
Alice Austen’s home was rescued by the community in the 1960s, designated a New York City landmark in 1971 and exhaustively renovated in the 1980s. Today it’s one of Staten Island’s most unusual treasures, close to industry and a heavily developed residential area, but serene as though kept under glass.

The house is as reverent to the craft of photography as it was when Alice was alive. On the blustery afternoon I spent at the Alice Austen House, the rooms were buzzing with children arriving for a workship on how to make and use pinhole cameras.Â Replicas of her equipment are featured in exhibits fashioned from Alice’s old drawing room.

While the home is in remarkable shape for a building over three centuries old, standing on the shores of the Narrows provides a special challenge for preservation, and the grant it has placed with the Partners In Preservation program would help weatherproof the structure, with additional repairs to the chimney and roof.

The Alice Austen House is digitizing many of her 3,500 existing photographs, available on their newly launched website. You can also go there for information on how to visit.

Below: Alice in a self-portrait with her dog Punch, 1893 [source] 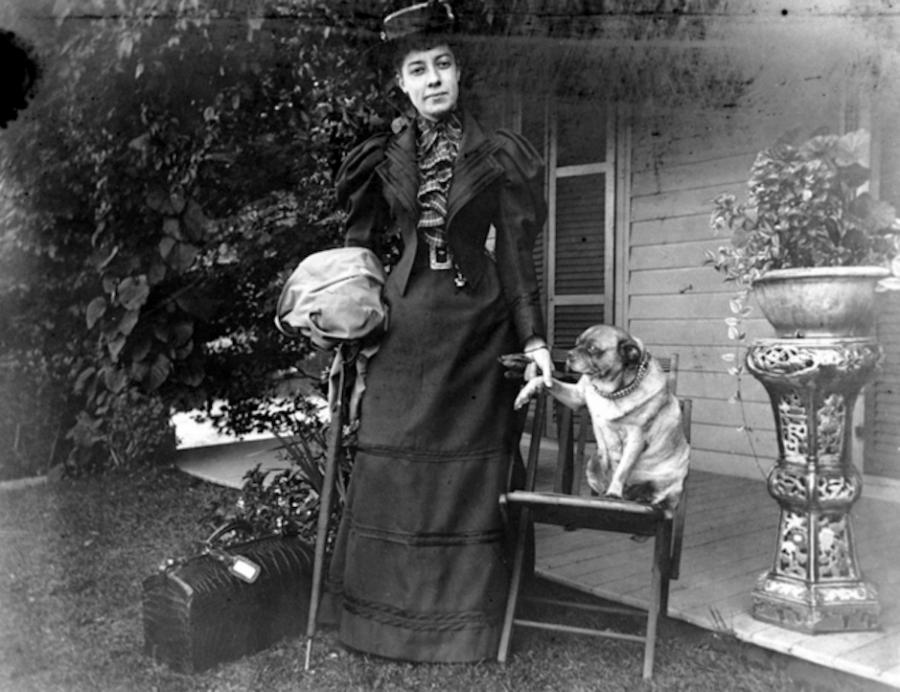 5 replies on “Camera Ready: The Alice Austen House, a rustic reminder of an uncommon artist and a cottage shrine to a life in pictures”

What a lovely tribute … knew nothing of Alice Austen before my friend sent me a link to this site. I look forward to exploring her photography and visiting her old home in Staten Island.

Thanks for posting. Alice Austen was such a remarkable woman and artist.

Never knew about the second Alice and Gertrude. Thanks. How about a podcast on the site and the couple?

Great piece.
A different, more fanciful account on of Alice’s introduction to photography (and her relationship with another photographer, Lewis Carroll) is provided on the website of the Forgotten History of Staten Island. A site which mixes fantasy and fiction.

Here’s a link to what I was referring too. http://fhsi.wordpress.com/alice-austens-amazing-adventures-in-the-wonderland-of-staten-island/