PODCAST Sick of Donald Trump yet? (Probably.) Figured him out yet? Is he a financial wizard, reality sideshow, or political distraction? Or all of the above?Â The solution may be contained in the roots of his fortune — a saga that stretches back to the 1880s and begins with a 16-year-old boy named Drumpf who made his living in a barber shop.Â The story unfolds during the early days of Queens, a borough once sparsely populated but by the 1920s, a land ripe for growth.

By the 1960s, Donald’s father Fred had built thousands of middle-class homes throughout Queens and Brooklyn and embroiled himself in some controversy regarding the remains of two Coney Island theme parks. The Donald built upon his father’s reputation to become a successful Manhattan developer and a flamboyant celebrity with seemingly bottomless levels of lucre. But of course everyone has their limit.

FEATURING: Trump Tower marbles, a miracle on 34th Street, and the magic that would have been Television City.

A home building frenzy in Woodhaven, Queens, at the corner of 64th Road and Woodhaven Boulevard. A massive population influx into the borough induced home development at a rapid pace. Fred Trump’s first constructed homes were in the neighborhood in the 1920s. 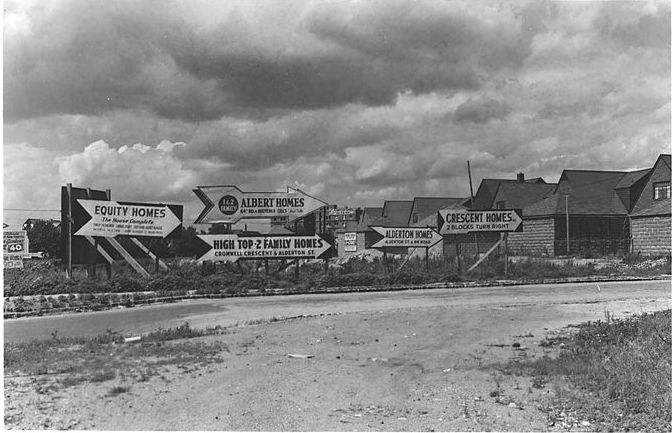 Donald and his father Fred Trump, two of the most powerful developers in the city by the 1970s and 80s. Of course, the elder Trump constructed mostly dwellings for the middle class, while Donald focused on the wealthiest New Yorkers. 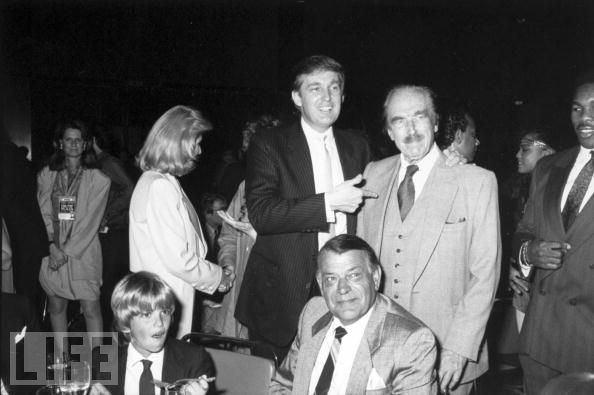 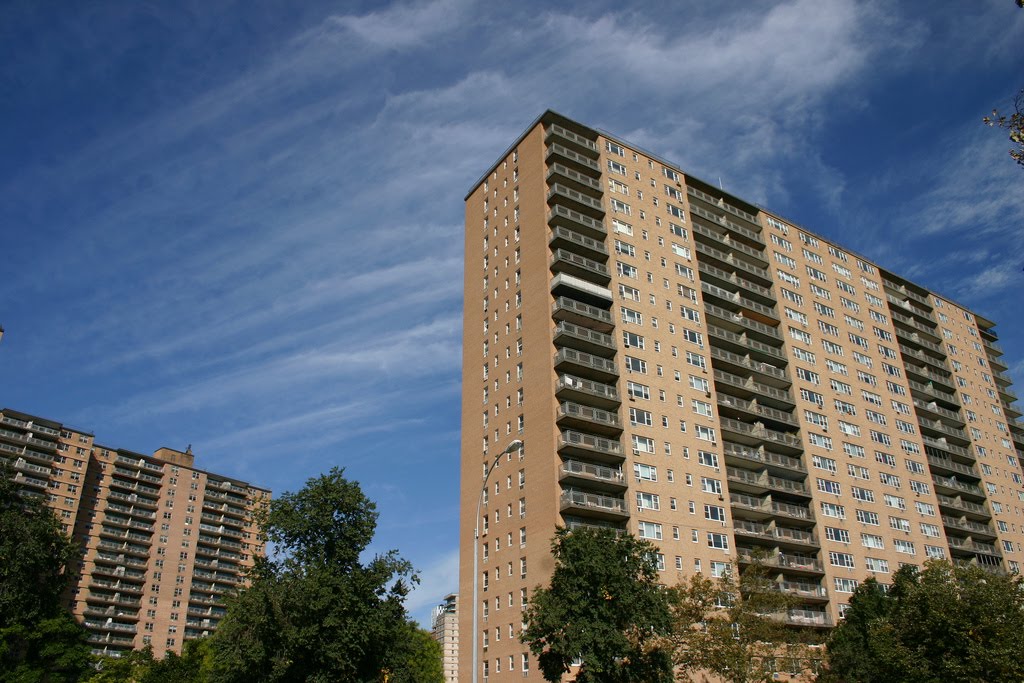 The Hotel Commodore under construction in 1918. Sixty years later, young Donald Trump would redevelop the property to become the Grand Hyatt, encasing the stripped-down hotel in a sleek glass tower that literally reflects Grand Central on one side, and the Chrysler Building on the other (below). (1918 pic courtesy NYPL; modern pic courtesy flickr/kw-ny) 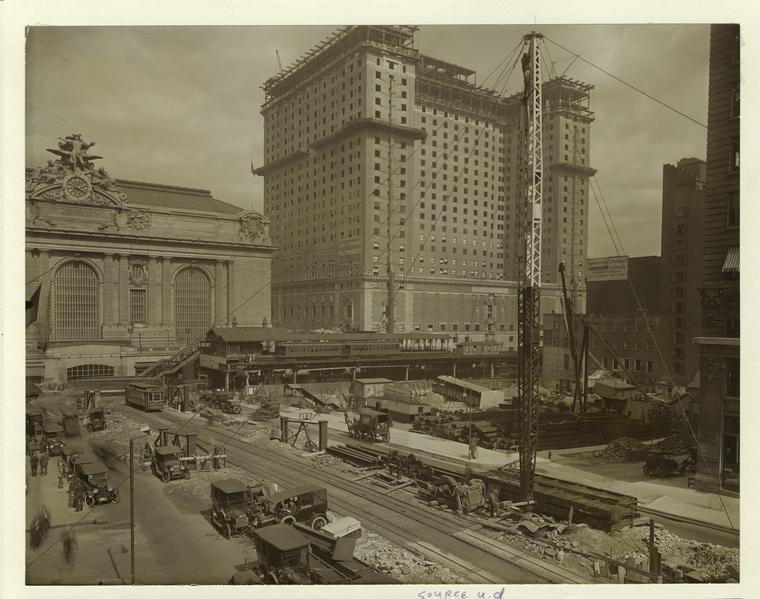 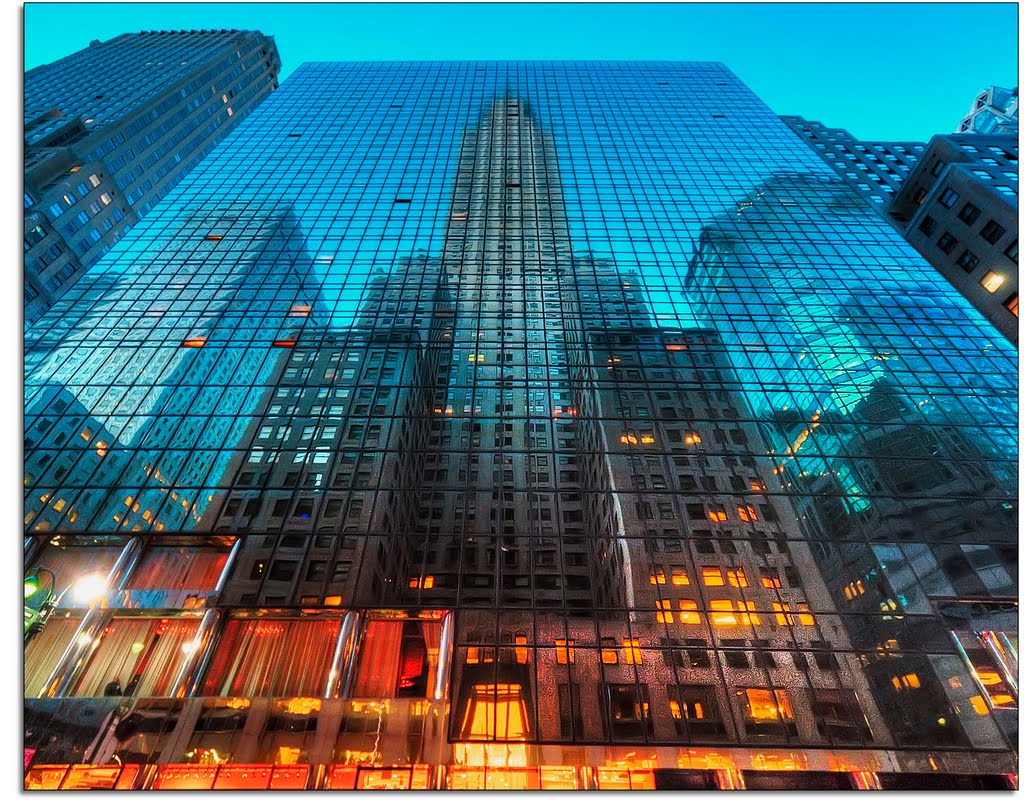 Trump rode a wave of personal connections, business drive and opportunity to become New York’s hottest developer by the 1980s, fueled by media attention and spectacle to become one of New York’s most ubiquitous celebrities.

Does anything typify New York in the 1980s more than Trump Tower, that fortress of wealth gleaming with imported marbles, finished in 1983 and offering the most expensive apartments in the city? 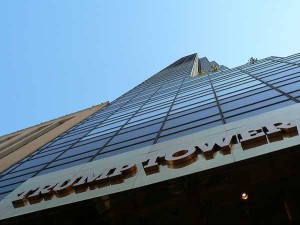 Bonwit Teller, the luxury department store that had the misfortune of having an address that Trump wanted for his Trump Tower. 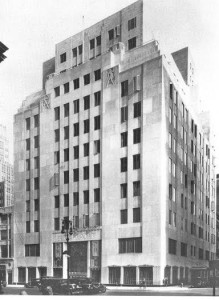 Behold — Television City, the Trump plan for the west side involving a 152-story skyscraper and a studio for NBC, originally at a total of 16 million square feet of space. 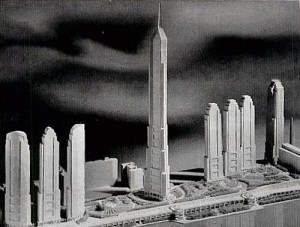 7 replies on “A short history of Trump: the roots of Donald’s wealth, from quiet Queens beginnings to glitzy Midtown excess”

Not a big fan of the Donald, but I did enjoy the podcast, and the pictures on the blog. I always thought the Grand Hyatt was an ugly monstrosity next to the majestic beauty of Grand Central. But I never looked it as reflecting the buildings in its glass facade. I have to say, although still not a big a fan, I have found new respect for the building.

It is surprising that Trump has gotten away with murder continually in the several senses of the term.
Regarding the building he put up on Varick and Spring Streets which zoning laws and neighborhood standards set as a 2o-22 story site:
Trump raised the building to over 40 stories. Other Cities would have not allowed this or if it occurred, would have forced the builder to dismantle the extra height.
The construction methods were so substandard that several high floors of concrete never set and slipped off the structure , killing workers and damaging property.
The construction stopped ,perhaps two weeks then resumed with no notice and no charges filed; raising the structure to its present height, which towers above the Village. Not even a slap on the wrist fine charged!

Donald is a true patriot. It is a pleasure listening to him, a welcome change from all the politically correct rhetoric flooding the news. He is the only way back from the dismal state we are in. We have 5.3% unemployment figure being broadcast, it is now a meaningless statistic. Macy is a disgrace to what America stands for.

i have read almost all your books and my family is a great fan of your books….just take all these things poitoively…lsrd krishna is giving you a name, recognition in this world by all these…thats it..keep writing…we would love to read your books…

He’s the President of the USA now. The most powerful man in the world. Who’d have guessed?