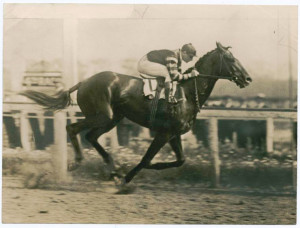 Above: Man O’ War, racing at Belmont, where one of the world’s greatest thoroughbreds cemented his reputation. The horse was actually owned by the son of Belmont Park namesake August Belmont. (NYPL)

The Kentucky Derby is this Saturday: two minutes of race and a day of fanciful hats, mint juleps and fanning oneself with a program at Churchill Downs. As the event that kicks off horse-racing’s Triple Crown competition, racing fans then gallop to Maryland for the Preakness before finishing in the Belmont Stakes. That final event takes place in New York City (well, kind of, a little bit, see below) at Belmont Park, which officially opened its gates 106 years ago today.

New York City has a healthy horse-racing tradition stretching to its very beginnings. In fact, the very first specially built race track in America was constructed in 1665 by New York’s colonial governor Richard Nicholl. Called Newmarket and located in the Hempstead Plains (just outside today’s border with Queens), it proved an enduring enterprise for colonists over a 100 years later. Smaller tracks were soon built in countryside closer to Manhattan island, some aristocratic British landowners would even built personal tracks on their estates.

Below: The track at Newmarket, “sixteen miles long and four wide, unmarred by stick or stone.” [NYPL] 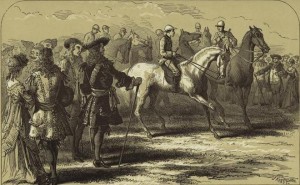 As it’s often considered today, horseracing represented vice, gambling and drinking among its prime distractions. It was discouraged by the Patriots during the Revolutionary War, but the British, holed up in New York for the entire conflict, blew off a little steam at the racetrack, constructing a new course, appropriately named Ascot Heath, approximately around today’s Brooklyn neighborhood of Flatlands.

New Yorkers threw the British out of the city in 1783 only to immediately indulge in their former oppressors’ racetrack pleasures. Seen as a corrupting British-era vice, horseracing was banned entirely for two decades then later allowed to carry on in one place — Queens County.

With regional exclusivity, horserace lovers looked to the popular trotting lane along Woodhaven Boulevard and built Union Course there in 1821. It became the most important race track in America and, for moral New Yorkers, a sesspool of sin. By the end of the decade, the track was being managed by former mayor Cadwallader D. Colden, once known for cracking down of alcohol consumption during his tenure.

Below: The galloping goings-on at Union Course, in the future neighborhood of Woodhaven 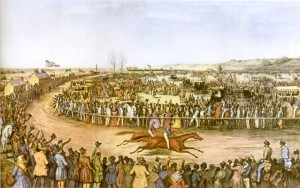 For those horrified by such vulgar activity, horsetrotting — a more civilized cousin to racing — was also popular in New York by this time, especially among the wealthy, making bucolic Harlem the prime destination for proper horsing around. Financiers and millionaires named Vanderbilt, Gould and Fisk made the upper reaches of Manhattan their own private race tracks, builting lavish stables in the neighborhoods near Harlem Lane.

By the start of a new century, horseracing defined a few region in Brooklyn. When William Engeman carved out some land east of Coney Island and called it Brighton Beach, one method they used of attracting city-goers to his luxury hotel there was building a racetrack. The Brighton Beach Race Course, located between Ocean Parkway and Coney Island Avenue, was soon joined by the nearby Sheepshead Bay Race Track, the product of a wealthy jockey club that included grandson to the Commodore, Willim Kissam Vanderbilt.

Not to be outdone, a former water conduit in Queens became the Aqueduct Racetrack in 1894 around the time the surrounding undeveloped land became the planned community of Ozone Park. It still enterains sports fans today and is one of the few venues in all of New York City to have hosted a visit by the Pope (the newly beatified Pope John Paul II, in 1995, see below). 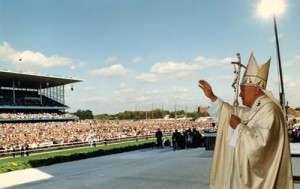 The rich might have planted more racetracks for their amusement throughout the city had the the state not banned gambling in 1908. (Off-track betting returned to the city in the 1970s.) Some tracks tried to transition to speed competitions for those newfangled automobiles, but most closed.

Interestingly positioned by 1905 was Belmont Park, a swanky racing track near the original place where Newmarket once stood long ago. The Park is technically in Elmont, Long Island, but it abuts the border of Queens and can be easily reached by the Long Island Railroad. By this time, horseracing was neither the wiling of the rich or the indulgent of the poor, but a pasttime for all. According to the New York Tribute’s coverage of opening day, 106 years ago today, on May 4, 1905:

“The attendance, morever, was not restricted to any one locality nor to any one class…. The Bowery and the Avenue mingled in the surging democracy of the betting ring. And both the Bowery and the Avenue wore its best clothes â€” and went home with them tattered and torn. In the more exclusive precincts of the clubhouse and the paddock there was a tendency to affect the raiment of Goodwood and Ascot, and tall hats and frock coats stood out conspicuously in the picture.”

It was so signficant that even Thomas Edison’s film crew was there to document the big day:

The famous third of the Triple Crown, today held at Belmont Park, became a part of the horseracing tradition in 1866 at the most famous former track in the Bronx — Jerome Park Racetrack, constructed by Belmont friend and racing afficionado Leonard Jerome. After moving briefly to a track in Morris Park, it moved to Belmont in the park’s opening year and has been saddled there ever since.

1 reply on “Why go to Kentucky? New York’s horseracing history”

Little wonder that the Pope was drawn to the Big A. More prayers were said there than most places in New York.