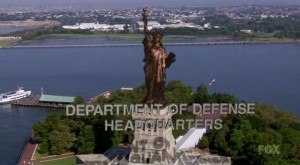 I’m an unabashed junkie of the sci-fi TV series ‘Fringe’, and the writers (or at one of them) seems to be a fan of New York history.

One of the conceits of the series involves an alternate universe with things are just slightly different from ours. Most notably, the World Trade Center was never attacked. And there are other changes to the skyline, one of which I wrote about last year — the construction of Antonio Gaudi’s comically absurd skyscraper.

But in this bizarro world where Manhatan is spelled with a single ‘t’, a shining beacon still stands in New York harbor. The Statue of Liberty, ever in stark brown copper, stands in for the ominous “Department of Defense.” And considering that this world is constantly attacked by temporal warps — that’s why Madison Square Garden is encased in amber — this building has an elevated, even sinister purpose.

This correlation is a clever nod to the structure on which Lady Liberty currently stands, the star-shaped Fort Wood. 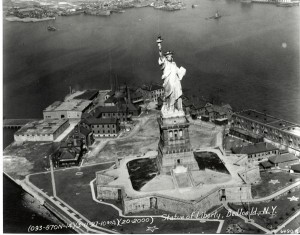 Many of the great forts that dot the New York harbor turn or will be turning 200 years old over the next year or so. Several fortifications, including Fort Wood, Castle Clinton and Castle Williams on Governor’s Island, were construction during the tense build-up of the War of 1812, anticipating that the city would need a tougher coastal defense. Older defenses, such as Staten Island’s Fort Wadsworth, were brought up to speed.

The fort on Bedloe’s Island, the original name of Liberty Island, was constructed like a starburst, a traditional 15th century European design and of the type one might build if your greatest enemy was a cannonball. This dynamic structure must have looked imposing sailing past, one of several a wary vessel would have see on its way into town.

Completed sometime in 1811, it was named after respected fort designer Colonel Eleazer Wood in 1814, the year he died in a battle against British forces near the Canadian Fort Erie. 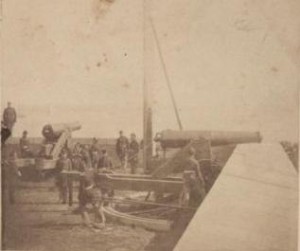 That intense conflict that re-matched the British with its young former colony never drifted into the harbor, and so the forts were thankfully never used. It and the forts on Governor’s Island prepared for battle again during the Civil War, holding ammunition and, on occasion, infirm Confederate prisoners. (At left, from a stereoscopic view of Fort Wood, equipt with manned cannons, most likely during the 1860s, pic courtesy NYPL)

With little need by the 1880s for so many fortifications, Bedloe’s Island prime location in the harbor made it an ideal home for Fredric Bertholdi’s elaborate piece of outdoor art, the Statue of Liberty. The fort was refitted for this new usage, and the statue of officially dedicated in 1886.

However, even after the statue arrived, the military remained on the island in new barracks, believe it or not, until 1937. (You can see them in the black and white photo above.) And in a sense, old Fort Wood has been besieged ever since, with millions of tourists, and has become central to an American icon, at least in our universe.

Below: Liberty as rendered by Currier & Ives, years before she went green 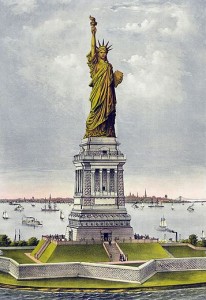 At the other end of the East River- where it meets Long Island Sound is Fort Schuyler and Fort Totten. Fort Schuyler, home to SUNY MArtime is the original Pentagon. There was a chain under the river to keep the British from sailing into NY. Fort Schuyler was constructed in 1805.