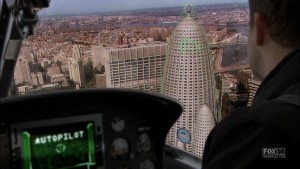 Joshua Jackson, looking down at Gaudi in an alternate universe. Courtesy Fringe Files

I promise, this is my last post on fake New York City history for awhile, but I couldn’t let the season finale of the FOX sci-fi series Fringe pass without comment.

A running scientific theory running through the series is the notion of a parallel universe co-existing with ours, with some not so subtle differences. We discovered this alternate universe last season when a character popped inside the still-standing World Trade Center. In the harbor sits the Statue of Liberty, in her original copper sheen, assumably off-limits to tourists and since 1989, home of the nation’s Department of Defense.

In this universe, it appears the grave threat comes from within its very fabric, not terrorists. Madison Square Garden — and the 10,000 people within it — fall victim to an expanding wormhole in 1999 and are contained in ghastly amber cocoon. And if you think that’s bad, you should see Boston!

Silhouetted above this frightening fantasy skyline, however, is a work of art straight out of a New York City dream — the Grand Hotel, built in 1908, and designed by one of the world’s most eccentric architects, Antoni Gaudi. A spacecraft like mound of rounded forms, zeppelin-like curves shooting in the sky, mocking the Beaux-Arts and seeming like something that could be built in the city today (or tomorrow). Unlike the city’s space-time mishaps however, the Grand Hotel, believe it or not, was really planned by Gaudi to be an actual skyscraper. 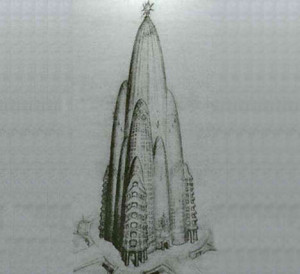 Gaudi’s talents lived apart from the styles of his contemporaries at the turn of the century, appreciated daily by the citizens of Barcelona in many otherworldly buildings he created, most famously La Pedrera, and growing spires of the Sagrada FamÃ­lia. In 1906, it appears Gaudi was approached by two businessmen with property in New York, asking him to design a luxury hotel in the style of the Waldorf-Astoria on 34th Street.

This being Gaudi, of course, the resultant sketches (for a structure he called Hotel Attraction) were nothing like the rectangular and domed objects currently rising above New York. At 1,016 feet, the monstrous hotel would have towered over the plans of F.W. Woolworth, whose own skyscraper was still in the planning stages in 1908.

This odd shape would have glistened with alabaster and bits of glass and tile. The interior would have included an immense hall ringed with circumferal galleries above it and decorated with sculptures of every American president. Below this, guests would enjoy a cavernous restaurant decorated with cosmic murals and a concert hall with ceilings 100 feet overhead. This alien masterpiece was slated to sit in the exact area where the World Trade Center would later be built.

The Hotel Attraction never made it off the drawing boards, but there were some efforts by ardent Gaudi fans championing it as the ideal replacement for the Twin Towers after 9/11. Could you imagine if they’d actually decided to build it today? It’s not so strange an idea. Gaudi’s cathedral is still being built in Barcelona. And in our alternate universe, the Gaudi’s grand hotel looks just spiffy.

I wonder how technically feasible this was in 1908. Certainly, Gaudi never built anything approaching this height. The only possible exception is the Sagrada Familia and I am sure his investors would have balked at the 100+ year construction time table for that.

I just have to say: thank GOD it wasn’t built. Imagine that thing standing next to the beautiful lines of the Chrysler and the Empire State– Worse, being built in 1908 it could have very well set a new standard for architecture in the city and stoped the Art Deco movement from growing at all. The city would have been a verry different place.

I think this would look great in NYC now! Let’s do something different than the usually steel boxes for a change! From one architect to another, Guadi was thinking outside the box and look how awesome it would look! The TV Show Fringe has shown us how Grand it really would be.