PODCAST Modern American rock music would have been a whole lot different without the rundown dive mecca CBGB’s, a beat-up former flophouse bar that made stars out of young musicians and helped shape the musical edge of downtown Manhattan. Owner Hilly Kristal may have initially envisioned a place for ‘Country Blue Grass and Blues’, but the music spawned by this little hole in the wall would define the contours of American punk and new wave.

The Ramones, Blondie, the Talking Heads and hundreds of others bands would never have been the same without this dank little club with the most notorious bathroom stalls in New York. Tune in to hear a tale of the club’s rather inauspicious start and find out why, even as a venerated music icon, it was forced to close its doors.

Hilly Kristal, back in the day. CBGB’s was originally Hilly’s On The Bowery, a spin-off of a far more successful West Village venue that frequently hosted performers like Bette Midler and Jerry Stiller. Hoping to draw a more music oriented crowd, Kristal changed the name to reflect broad tastes: Country Bluegrass Blues and Other Music For Uplifting Gormandizers. 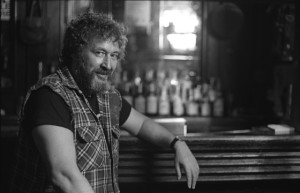 Initially unimpressive by any metric of musical quality, the scraggly group of guys from Forest Hills, Queens who formed The Ramones soon become a staple of the CBGB stage and the one of the most influential acts of the American punk style. If there’s a voice to 315 Bowery, most likely it’s that of Joey Ramone. (Photo by Allan Tannenbaum, from here) 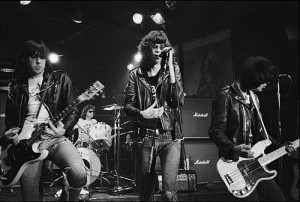 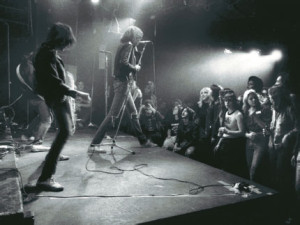 Deborah Harry and Chris Stein debuted on the CBGB stage as members of the Stilettos used the club to make their transformation into Blondie, the most successful group borne of Hilly’s Bowery club. Chris and Debbie are seen below with Arturo Vega, 1978. (Photo by Lisa J Kristal, photo from here) 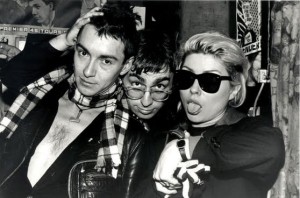 Hilly in later years. The club become a high-profile victim of Bowery gentrification and had to shut its doors in 2006. It lived on briefly as a St. Mark’s clothing shop, even as its old location become home to a John Varvatos menswear boutique. Photo by Peter Sutherland (here) 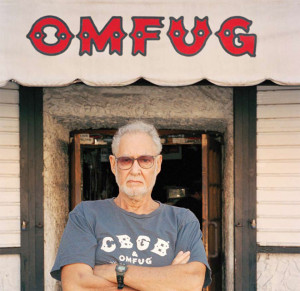 Check out the official CBGB blog for lots of great stuff associated with the club, including lots of old photos and that full color ‘walk-through of the club. You might want to take a shower after viewing it.

6 replies on “CBGB & OMFUG: Punk music history on the Bowery”

Loved the show today! I live about four blocks from the John Varvatos where CBGB once was, and I wish I had had a chance to witness what the place was like back in the day. Thanks for the show as always, and keep it up!

I really enjoy your podcast series, but found a small mistake in this one. Sid Vicious was the bassist for the Sex Pistols, not the lead singer.

Also I’m not sure gentrification was solely to blame for the club’s demise. From articles I read at the time, Hilly was claiming CBGB couldn’t afford to pay their rent (to the BRC – a non-profit that helps the homeless, by the way).

However, he wasn’t counting the money CBGB t-shirts and other products brought in because he had set it up so it was a separate company (CBGB Fashions). This NY Times article says CBGB Fashions alone grossed about $2 million per year.

I moved to the city for college in 2005 and made sure I got to see CBGB’s before it closed. My parents met there, my dad has some crazy stories about the club. I only got to go there once before it closed. I scribbled my name on the wall in the bathroom downstairs, I hope it’s still there. The thing that I remember most about the club was the smell. It smelled like bleach, stale beer, and something I can only discribe as the smell a humidifier makes when you put your face over it, like water vapor or something.
I’ve been to the club since it’s been turned into that eye sore of a mens clothing store. I imagine few people go there to shop as much as they do to just see the site.

Im told after all this BS about the space needed for housing the place is another stinking Yuppie bar where the Hamptons “incrowd” weirdos come to pretend during winter!!

Little did I know that when I entered the incredibly nasty, urine-stained and vomit-soaked CBGB’s bathroom in the Summer of 1975 after listening to some unbelievably amateurish bunch of louts from Queens calling themselves The Ramones, still stunned that they could hardly play 3 chords, that I was entering one of the temples of rock and roll – well, punk at least – history. Jeez, they were bad.

I actually got to play there in 2003. At their last minutes of trying to pay rent, they the two store fronts to either side around 1999, one that which show jazz/free jazz, and the other for dance music. The original at this point was mostly indie/garage/punk rock. (My band was closer to a free jazz at the moment). Don’t forget the Mars Bar across the street!