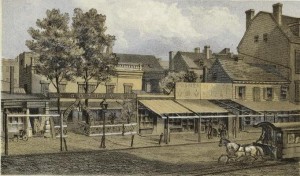 Above: The first of hundreds of Bowery hotels — the old Gotham Inn in 1862. The inn, which dated from the 1790s, sat quite close to where 315 Bowery is today, just north of Houston Street. (Pic courtesy NYPL)

The early history of buildings at 315 Bowery — the address that would later become the club CBGB’s — is spotty indeed, but some early references to the address reveal some rather odd events that took place here.

In the 1860s, the Bowery neighborhood would still have been a de facto theatrical district for the lower classes, “New York’s primary locale for down-market entertainment – saloons, beer gardens, amusement halls, dime museums, street vendors and oyster houses,” according to David Levinson. Not quite given over to the truly seedier elements which would define the street for over 100 years.

In the early 1860s, it appears a pet shop or bird supplier resided at the address 315 Bowery. One William F. Messenger, with profession listed only as ‘birds’, lived at this address in May 1861.

On January 31, 1862, the New York Times reported on a strange gathering at 315 Bowery and presumably at Messenger’s shop — the Bird Fanciers’ Third Annual Exhibition of prized fowl. Little is known of the group, which had reportedly been in existence over a decade by this time.

Prizes were awarded to bird lovers who kept roosters and hens, with a gentleman by the name of William Manson really cleaning up:

However, despite its avian beginnings, I was able to find mention of the address’s musical heritage during this period: a John Bogan is listed as living or working at the address in 1867-68 as a “banjoist”, a teaching instructor (and possible manufacturer) of banjos.