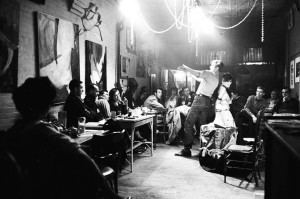 Radical thoughts, limited spaces: a performance at the Caffe Cino. Photo by Ben Martin (from an excellent website by Robert Patrick about this important off-off-Broadway site)

Megan might be Sterling Cooper Draper Pryce’s hottest new pitchwoman, but deep in her heart of delicate French extraction, she wants to be an actress. And in last night’s show, she steals away to an audition of an unnamed off-off-Broadway production. She didn’t get the part, but the experience leads her to make a jarring decision.

This wasn’t merely a plot contrivance, but rather another use of New York geography to delineate character. Don Draper was busy at Danny’s Hideaway, a Midtown East restaurant along famed ‘Steak Row‘ shimmering with late 50s — and, by 1966, ever fading — glamour. Megan’s off-off-Broadway audition could only be one place, and that was downtown below 14th Street, in the thriving epicenter of New York counter culture.

Aspiring performers have made New York their destination for fame since the late 19th century with the birth of the Broadway theater circuit. By the 1950s, playwrights and producers who challenged the preconceptions of standard, mainstream theater found homes for their work off Broadway both literally and metaphysically. The art of theater could now be explored for smaller crowds and with smaller budgets. 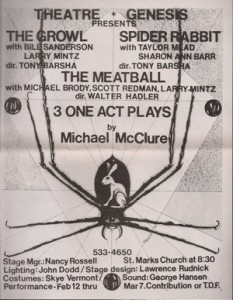 But even off-Broadway was not immune to financial realities. By the end of the decade, the popularity of off-Broadway created a parallel industry, “a smaller-scale version of Broadway itself.” [source] If you were to look back at the greatest off-Broadway hits of this era (plays by Tennessee Williams and Edward Albee, musicals like Threepenny Opera) you’d notice that most of them have had subsequent Broadway debuts. Indeed, off-Broadway continues to be a sort of a minor league tryout for future Broadway shows.

By the 1960s, unconventional creative voices were emerging that seemed positively alien even in that world. What do you call the alternative to something that was itself the alternative? Although Village Voice critic Jerry Tallmer is credited with coining the phrase ‘off-off-Broadway’, the phrase might have sprung up naturally the first time audiences came in contact with the early works of this field — modest, broken-down, difficult and experimental shows eager to discard every theatrical trapping that had built up for the past four hundred years.

The first ‘true’ off-off-Broadway performance, according to Tallmer’s fellow Voice critic Michael Smith, was a surreal revival of Ubu Roi, performed at a Bleecker Street coffeehouse in 1960. Theatrical experimentation complimented the Village music scene nicely, as even the smallest venues could now host a production. Only in this new creative world could a cramped, smoke-filled coffeehouse like Caffe Cino, at 31 Cornelia Street, become center stage for a new theatrical revolution.

If the art was nontraditional, so too were the venues. Two churches became important homes for alternative theater in the early 1960s and they remain so to this day. Judson Memorial Church, off Washington Square, may seem austere with its elegant Italianate bell tower, turned its meeting room into an off-off-Broadway stage in 1961. And, of course, St. Marks-in-the-Bowery, took a page from its own 1920s radical bohemian past to become home to the Poetry Project and Theater Genesis (performing sometimes sexually explicit plays in the churches parish hall). Above: A poster for Theater Genesis

But just as many pivotal and provocative voices of off-off-Broadway were developing further east, in an area of the Lower East Side heavily influenced by Greenwich Village counterculture idealism and referred to by the mid-60s as the East Village. The chief among these, Ellen Stewart’s mold-breaking La Mama Experimental Theatre, opened in 1961 and rejected most theatrical instincts, featuring only new plays in a stripped-down, almost barren theatrical space. Pictured above: Ellen Stewart in 1970. Picture courtesy TCG

By 1966, off-off-Broadway became a banquet of experimental ideas, spaces for gay, feminist and African-American playwrights and performers. In effect, the opposite of a certain ad agency, where creative flowering is hindered by the whims of client preference and the banality of subject.