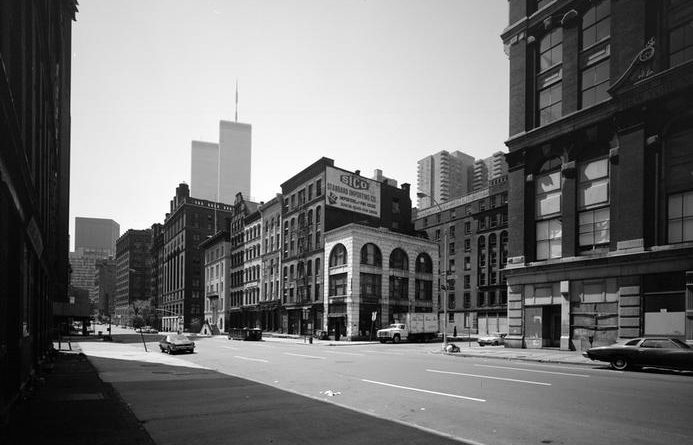 PODCAST Tribeca (or TriBeCa, Triangle Below Canal) is a breathtaking neighborhood of astounding architectural richness. But how much do you know about this trendy destination and its patchwork of different histories?

You’ll be surprised to learn about the many facets of this unusual place, including:

— Lispenard’s Meadow, tracing back to the property’s first Dutch settlers;

— the Ghostbusters Fire House, a pop-culture landmark that witnessed an astonishing architectural shrinkage;

— the AT&T Long Lines Building, an imposing monolith with mysterious secrets contained inside;

and the TriBeCa Film Center, bringing a new direction to the neighborhood thanks to its co-founder Robert De Niro

PLUS: What are codfish cheeks? Pert nurses? Weekend leathers?

The park was replaced with St. John’s Freight Terminal with a statue of Cornelius Vanderbilt affixed at top.

The location of St. John’s Park in 1836 and its footprint, clearly seen, in a modern Google Map

Images of Washington Market (depicted between 1820-1860) from the New York Public Library collection. It’s hard to property visualize how dominant the market was to the street life of the future Tribeca neighborhood. Hundreds of vendors spilled out into the street and soon the many blocks surrounding it served the market’s purposes.

Washington Market in 1912 — a century of service with many decades to go.

By the 1950s, most of the market district was contained in a new Washington Market structure. It was torn down in the 1960s to make way for the World Trade Center.

Hotels like the Cosmopolitan were built when the center of New York culture was near City Hall. As cultural institutions moved north, the Cosmopolitan successfully transitioned into a businessman’s accommodation, serving both the dry goods district and the Washington Market. Believe it or not, the Cosmopolitan is still around as The Frederick Hotel.

Firehouse, Hook & Ladder Co. 8 — before the widening of Varick Street and after

Pictures of old St. John’s Chapel in its final years, courtesy the Museum of the City of New York collection:

Staple Street with its distinctive skybridge.

At the top of the old American Express stables is a curious fellow staring down at you.

We’re dedicating this show to our good friend Nancy Schwartzman whose upcoming documentary Roll Red Roll will make its debut at the Tribeca Film Festival next month.