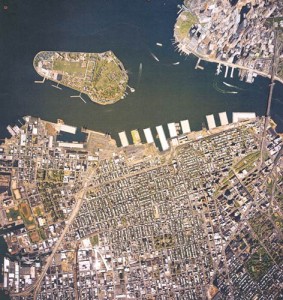 Some tidbits we forgot to throw into our podcast on Governors Island….

Governors Island holds a special place in aviation history. When Wilbur Wright, he of the famous duo, lifted his small aircraft from the airfield at Governor’s Island to circle the Statue of Liberty and return, in Sept 1909 it was the first time a plane had flown over American waters.

Within a few years, a flying school was encamped on the island and was the busiest airfield in the US during the early days of aviation. You can find a memorial to this fantastic history in the form of a bronzed plane propeller, situated in the lawn of Liggett Hall, facing south.

Here’s a shot of Wilbur’s ride: 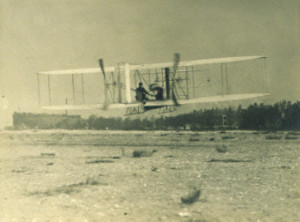 The Dutch, namely Wouter Van Twiller, purchased Governor’s Island in June 1637 from â€œthe Native Americans of Manahatas for two ax heads, a string of beads, and a handful of nails.” New York State, namely governor George Pataki, symbolically purchased the island back from the US government in January 2003 for one dollar.

The Army built a railboard on the island, with the grand length of 1 3/4th milies of track, and was considered at the time to be ‘the world’s shortest railroad line’.

Fort Jay was named after John Jay, one of the authors of the Federalist and the first Chief Justice of the Supreme Court. However, do to a very unpopular treaty at the time that Jay had negotiated with the British — called the Jay Treaty — the name was changed to Fort Columbus, until it was changed back to Jay’s name in the 20th Century.

Technically, Governors Island belongs to no borough. Neither do Ellis Island, Riker’s Island, Randall’s Island, and Roosevelt Island. Although administration of the island’s business is naturally run through Manhattan. Its zip code, incidentally, is 10004, which it shares with other Battery Park business.

During the 1863 draft riot, Governors Island was actually stormed by rioters who wanted to get into the Army’s stockpile of weapons. They were held back by civilians on the island, because the Army soldiers were over guarding buildings in Manhattan!

Some would like to see Castle William turned into the New Globe Theatre, a 21st Century homage to Shakepeare’s old stage. We see a structural resemblance, but frankly we’re not for this idea. 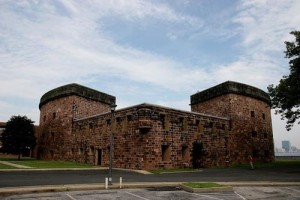 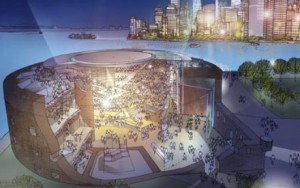 Reagan, Bush and Gorbechov came to the island in 1988 for a summit, a year before the fall of the Berlin Wall. Here’s the juicy details.

The following is my own personal experience of Governors Island as a Coast Guard recruit in 1969:

The arduous, overstated virility of the ambience
Cold, hard and acrid as brass
Relentless, constant as the surrounding brackish waters
Of the deep, dark Hudson’s eternal tides…

Like a young man’s tearless, unavowed solitude
In the lone, Spartan celibacy of a hard bunk
Enveloped in sterile, rugged, anonymous sheets
And the vague odour of industrial laundry

Supposed to howl “Yes, Sir !” in feigned obedience
To some insignificant, masochistic Sergeant
In execution of some purely capricious “order”
The sole purpose of which is your humiliation

Paradoxically, across the Bay, rose Manhattan Island
The awesome Apple and her Civilisation and… Freedom
Reflecting, at night, her sparkling lights on the water
Lady Liberty out there holding her torch to no one’s edification

Tonight, he would make a break for it
Somehow sneak onto the ferryboat
Leap off on the other side
Or perish in the icy waves of the Hudson