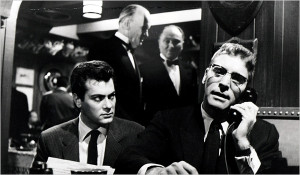 Almost as if they had asked us to help them program their schedule, the Film Forum begins their five week NYC Noir screening series, featuring some of the best thrillers, mysteries and action films set on the streets of the city. In this blog every Thursday of the series, we’ll feature a bit about one of the films, and encourage you to go check out some of these classic flicks.

They kick off the festival with one of the most likeably cynical films ever made, Sweet Smell of Success, starring Burt Lancaster as the city’s most powerful gossip columnist JJ Hunsecker, back in the day when gossip mongers wielded their Page Sixes almost menacingly. Unfortunate for Martin Milner, playing jazz musician Steve Dallas that he should happen to get engaged to Hunsecker’s naive sister. Hunsecker soon makes it his business to see the coupling destroyed. His secret weapon? A curt and cool Tony Curtis, as Sidney Falco, the most dispicable and pathetic press agent in town.

Easily one of the best films to portray the glitzy 1950s New York nightclub scene, the characters weave themselves through half the bars in midtown, most notably the 21 Club formerly on 52nd Street. The night scenes have both a stink and a sheen to them, thanks to rigorous location shooting. Director Alexander Mackendrick’s complained of the bustling street noise — not to mention Curtis groupies, waiting for a glimpse — but it lends the movie pulp authenticity. Midtown never looked so stark and busted.

Hunsecker’s apartment, which plays a pivotal role in the final scenes involving his nervewracked sister, is actually in the Brill Building, 1619 Broadway near 49th St. According to Roger Ebert, a shot inside its lobby is mirrored by another film playing later in the NYC Noir series, Taxi Driver.

The film plays this Friday and Saturday. The showtimes and dates for this and the rest of the films in the series can be found here. My favorite part about the Film Forum’s repertory series is that you pay for double feature during the weekend, so find one you like and go hunker down….