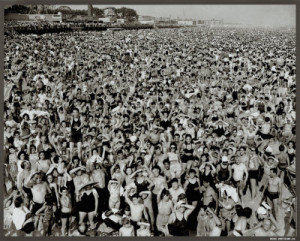 Its gonna get hot this summer in New York City. Pretty obviously July is the worst month for those in business suits, but as bad as it gonna get, consider this:

The hottest day in New York City history was on July 9, 1936, where it reached a staggering 106 degrees. Pair that with the accepted fashion of the time — i.e. shorts and tanktops were barely in vogue on Coney Island, much less casual dress wear through the streets — and you’ve officially got one of the most unpleasant days in the city’s history of recorded temperatures.

At 104 scorching degrees, runner up goes to July 21, 1977 — which actually occurred eight days AFTER the legendary blackout — and August 17, 1918, seeing the end of World War I and the beginning of a devastating influenza epidemic.