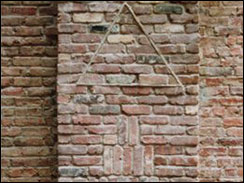 A bit of strange New York archaelogical news surfaced on the networks last night. A mostly demolished building at 211 Pearl Street was spared complete eradication when strange triangular marks were discovered on one of the remaining walls. While this may seem like a rather odd story to be making headlines, I believe its a clever effort by some in the historical community to make the runic universes of Da Vinci Code and National Treasure work in a way to save New York’s past.

Volunteer historian Alan Solomon discovered the strange triangular marks several years ago in an effort to save the building. His efforts to thrawt developers has attracted city council members to the cause.

Apparently, nobody can figure out what the triangles mean, so naturally the mind wanders towards the potentially most exotic ideas — that the symbols have obscure and cryptic religious meanings.

Scholars of esotericism — the notion of divining the spiritual in reflections of the mathematical and scientific — note the symbols are characteristic of esoteric markings and could hold meanings in the actual measurements of the triangles themselves. Something, say, the Freemasons might have appreciated.

The actual mortor dates from the 1950s, however the bricks themselves could be at least a hundred years older and merely repaired by the newer mortor bond.

And just to add a little intrigue into the tale: the building where the triangles were found was built for William Colgate, of the famous toothpaste, and extremely religious man who made note to save the building in his will, although no records exist of the building being used for any of Colgate’s business ventures.

Is this just a story with exaggerated merit to save the vestiges of an historic structure? Or are the triangles the remnant of secret religiious ceremonies? Could they point to a hidden treasure underneath the streets of New York City? Somebody call Nicolas Cage!

More on this detective story here (including chime in from city councilman Alan Gerson) and here.