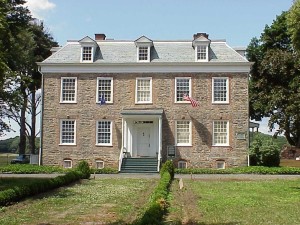 In one of my entries below regarding the Mudd Club, a reader asked why I referred to Cortlandt Alley as ‘mysterious’. The tiny little alley — one of New York’s last — is between Canal and Franklin and, while partially my own projection upon it as a rough reminder of old New York, the dark and creepy path retains much of its bruised, dented appearance.

Perhaps in deference to the Mudd Club days, however, the alley has also become a haven for artistic talent, inspiring the likes of filmmaker Laura Kraning, installationist Matthew Gellar and photographer Spencer Tunick, who took one of his community of nudes there.

What does this have to do with an UNUSUAL MUSEUM?

Cortlandt Alley was named after Olaff Stevenson Van Cortlandt, who came to ole New Amsterdam 1637 and whose progeny would go on to become powerful forces in the new city.

The Van Cortlandt’s base was in what is today the Bronx, and since 1897, their sprawling estate has been a museum and preservation to the lifestyle of early New York culture. It is officially the oldest standing structure in the Bronx, perched in massive Van Cortlandt Park.

The stately home was built by Olaff’s grandson Frederick, and the museum preserves rooms from the period from it was built in 1748, through the era (1823) that the house was maintained by his sons. If you’re doing your math, that would put the decor solidly in the American Colonial period. That’s right: George Washington slept here . During the Continental Army’s eventual retreat from New York, George set up officer’s quarters here. It must have sucked to leave the cozy charm of this house to cross into New Jersey and eventually the frozen shores of the Delaware River.

On top of its almost doll-house preservation of furniture and archectecture, there’s also a quaint herb garden outback. And, for some reason, my favorite part — Colonial waffle irons! You can even get the old-time recipe from the website, which also has visitors info and other historical details.

While you’re out there, why not check out the Van Cortlandt golf course nearby? Its the oldest golf course in the United States, built in 1895, but is still 150 years younger than the house that sits nearby. If that’s not enough for you, its also a movie star in its own right, starring in several film, including pivotal scenes in Wall Street.

As for Van Cortlandt House, don’t confuse it with the Van Cortlandt Manor, farther into New York state. Olaff’s son Stephanus , the first native-born mayor of New York City, moved farther up the Hudson River valley to what is now Croton and his house, which can also be visited, is almost more exquisite for its bucolic surroundings.