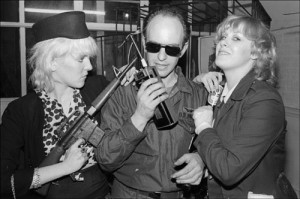 To get you in the mood for the weekend, every Friday we’ll be celebrating ‘FRIDAY NIGHT FEVER’, featuring an old New York nightlife haunt, from the dance halls of 19th Century Bowery, to the massive warehouse spaces of the mid-90s.

First on the list is the Mudd Club, often viewed as the mirror image of its more known uptown competitor Studio 54. Located between the borderlands of TriBeCa and Chinatown (77 White Street, near mysterious Cortlandt Alley), Mudd was a multi-level playground for the avant garde and strictly fabulous (i.e. one of the most notoriously elite clubs in the 70s), playing more to the burgeoning new wave and punk scene than to the disco beats echoing through other halls.

Unlike nightclubs today, which seem to cater A-list celebrities and their worshipers, the Mudd Club with its gold stairs and dark halls attracted a serious cult set of icons from the deep trenches of New York culture, particularly latter era Warhol proteges and art rock stars like Lydia Lunch.

Mudd owner Steve Moss was able to attract such rough-and-tumble innovators by combining its chicly trashy main floors with an art gallery on the fourth floor. The place became known as much for its Jean Michel Basquiat exhibititions as it did for its groundbreaking performances by the Talking Heads, Klaus Nomi and Bow Wow Wow.

In fact, David Byrne and the Talking Heads immortalized the club in their song ‘Life During Wartime’: “This ain’t the Mudd Club or CBGB’s, I ain’t got time for that now…”

On any given night you could stumble into the club (if you were ‘downtown’ enough) and, for instance, hear Debbie Harry rapping with Fab Five Freddy.

The club thrived on the degenerate but respectable synergy between art and music, a concept that would become mainstreamed in the late 80s. Although its no longer open in NY, its owner Steve Moss opened another version in Berlin in 2001, and purportedly he sits at the bar, still overseeing his nightly menagerie, even as most of the artists and performers he helped create in the 70s and 80s have passed on. (In fact, that’s Steve in the photo above, with members of the punk band Combat Rock.)

In addition to a European club, the former haunt also lives on as a shade of makeup.

There are tons of fun pictures from the Mudd Club’s heydey here.

And here’s Jean-Michel, basking in his brief fame: 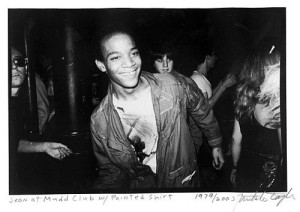 And why the Mudd Club? The urban legend claims that it was alledgedly named after the doctor and alledged Confederate conspirator (or maligned innocent, depending on who you talk to) Samuel Mudd, who helped John Wilkes Booth escape after he murdered Abraham Lincoln. Mudd mended Booth’s broken leg which he received when he fled D.C., and the long stick he used to set the bone was known as ‘Mudd’s club’.

Hi…Gallo was only in Gray for their last gig ever & rehearsed with them for only 2 weeks prior, perhaps. Like many other things he’s done, he takes a lot more credit than he’s due. He’s a funny guy that way…