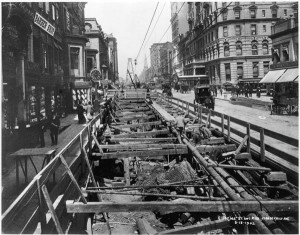 Wednesday’s steam explosion disaster at 41st Street and Lexington Avenue, which at â€˜press timeâ€™ had killed one person and injured 44, gave many people that sinister feeling of dÃ©jÃ  vu they felt on Sept. 11. It reminded us almost as much of the New York blackout of 2003, with hundreds of people filling the streets with busy cellphones and sweaty backs, some annoyed, some good humored.

Believe it or not, however, over a hundred years ago, the Grand Central Station environs bore witness to an even more horrifying explosion â€¦ just one block away.

William Barkley Parsons was given the arduous task of installing the first New York City subway system in 1894. After visiting the London Underground, he determined that the best way to drill holes through the varied and sometimes delicate surface of the island was with a method called â€˜cut and coverâ€™ â€“- essentially digging a gigantic, deep trench and sealing it up at street level. This was chosen over the trickier â€˜deep tunnelingâ€™ which required greater blasting and elaborate subterranean passageways.

One of the subcontractors in Parsonâ€™s employ was the unfortunate Ira Shaler, who was in charge of the tunneling of 34th through 42nd Street. This being before the days of union and workerâ€™s protection, Shaler was soon stamped with the mortibund nickname â€˜the voodoo contractorâ€™ for a nasty string of deadly accidents along the line.

And so, 105 years after Wednesdayâ€™s steam explosion, the greatest of Shalerâ€™s accidents happened a block away at 41st and Park Avenue, on Jan 27, 1902. A wooden shed filled with 200 pounds of dynamite ignited and blew, sending billowing flames high into the sky and glass shards flying for blocks. The nearby Murray Hill Hotel was severely damaged as was the great faÃ§ade of the Grand Central terminal. Five people were killed and many others seriously injured. The tunnels below, strangely, were barely disturbed.

Shaler continued on, and with him, smaller calamities occured up and down the newly constructed tunnel shaft.

In the end, Shalerâ€™s final unlucky victim was Shaler himself. He died five months later, four blocks down, on 37th and Park, crushed by tumbling rocks while he was demonstating the tunnelâ€™s safety to his boss.

Or to quote professor Clifton Hood, a professor of history at Hobart and William Smith Colleges: “Parsons pointed to a rock and said it looked rotten. Shaler disagreed, stepped out from under a protective cover and tapped the rock with his cane. It all came down on top of him. He died a few days later. It was not a good way of losing an argument.”

1 reply on “Grand Central’s Other Explosion”

New York! What a town!

So now we have Con Edison and terrorists to worry about.

It happened on the West side of 41st and Lexington Ave. I was like a block away in the office. At first I thought it was thunder, but it just kept going for like over 20 minutes it seemed, and it was very very loud.

Very scary, the NYPD says it was not terrorism. They say it was a steam explosion. Smoke and steam went up over the 45th floor. There was no black smoke like a fire though. Out the window I saw people running from the area. It was pretty scary, I was positive while in the area that it was terrorism.

There are pictures of a big craterish hole in the middle of the street with a red tow truck sitting in the hole. Terrorists would have had to go under the street to plant some bomb there. That’s not the way they would have done it. We all can think of much more effective and easier ways, and better places.

It happened right around the corner from one of the biggest creators of traffic congestion in NYC.

Will Mayor Bloomberg do anything about Park Ave. being blocked off at 42nd street?

I think Mayor Nanny Bloomie is a very arrogant man. I also highly doubt he rides the subway that much. He’s the mayor, I want someone driving him around so he can work and make calls and stuff. New Yorkers shouldn’t want him wasting all that time on the subway.

We all have to wonder what Bloomberg is really thinking of with this congestion pricing tax scheme. Maybe he mostly just wants a new tax. Just wrap it up in ‘concern for the environment’, and then people can just demonize those who oppose it.

If he cares so much about traffic jams, congestion and air pollution, why does he let Park Avenue be blocked off? Why doesn’t he do anything about that?

But apparently it does not bother NYC’s Nanny-in-Chief Mike “Congestion Pricing Tax” Bloomberg?

It certainly supports his claim that the city is hugely congested.

Check out the map! Tell your friends!