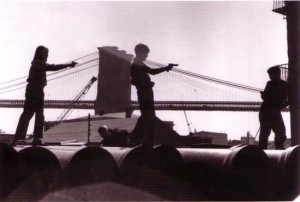 We think of the Lower East Side now as being a tolerant mix of different cultures — Jewish, Chinese, Hispanic, many others, including that ever popular pseudo distinction ‘the hipster’ — but a current photographic exhibition at the South Street Seaport Museum proves that things were even more vastly divergent and varied.

Rebecca Lepkoff was a dancer who took her paycheck from a performance at the 1939 New York World’s Fair and bought herself a camera, which she used to photograph the neighborhood of her childhood. (Her home was at 343 Cherry Street.) A brilliant handful of these pictures are being displayed at the Seaport’s cozy old museum in the show ‘There Once Was a Neighborhood’, revealing a cross-section of shop-keepers, dock workers and everyday people in the crowded streets of lower Manhattan, from the ethnicity-dense streets of Orchard to the vistas of South Street.

Although a small show, comprising a single dank and inviting room in the middle of the Schermerhorn Row building, the photos tell a venerable tale of daily life, without the political mission statements that other photographers of the time would use to frame the poverty of the Lower East Side.

Lepkoff catches smiling workmen taking breaks, couples strolling now-destroyed waterfront paths, wharf kids playing cops and robbers . Old movie posters ripple from the walls of buildings soon to be demolished by the developments of Robert Moses. (If I had to find a beef with the show, it would be the occasional interupption of Lepkoff’s calm to remind us of the damage that Moses reeked upon the city.) Perhaps the view is a bit rose-colored; reality sneaks in at the photo’s edges, in worn faces, frayed cuffs, ramshackle signage. But its blatant nostalgic tinge, in the small sweet dose you get at the museum, is warm and welcoming.

Added bonus: a brief video plays featuring the fiesty lady herself, talking about her life in the LES. The best anecdotes involve her process for taking the photographs — just standing in the street until people got used to her. 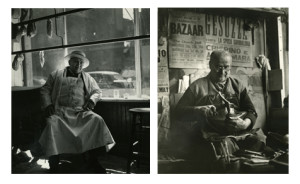