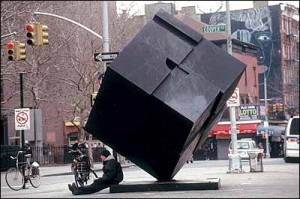 It’s very revealing to me how bizarre, completely unnatural shapes just sprout up out of the ground in New York City, and we walk by them as if they were natural fixtures, as common as a mailbox or a newsstand.

The spinnable cube in Astor Place is the best example of this. Could you imagine this East Village plaza space without it? Even as it’s now shaded by a new condo, sharing the square with a gaudy blue Chase Manhattan vestibule, it still sits immutable like a hunched homeless person that won’t leave.

The broken-looking but still operating sculpture is technically named Alamo, created by Tony Rosenthal and positioned in the middle of Astor Place in 1967. Rosenthal specializes in geometric oddities, usually broken up by their surface textures or interfaces with other shapes.

The Alamo — or Cooper Cube, or simply, The Cube — isnt a solid cube, but an uneven bonding of eight smaller ones, balanced on one of its tips. And it rotates clockwise, if you expend a little bit of elbow grease.

Why the Alamo? Like all of Rosenthal’s work, it might be difficult to ascribe the connection of title with object. Apparently Rosenthal’s wife coined the title, as the balanced cube displayed an “impenetrable strength” similar to the last holdouts at the infamous Texas fort. Hmmm.

The Cube (which everybody calls it) is particularly popular with students at neighboring Cooper Union, who are actually responsible for the Cube being there at all. It was originally placed there on a temporary basis by the NY Park Service, but Cooper Union students petitioned for the sculpture to be installed permanently.

The interlocking cubes making up the entire sculpture were inspiration for a notable prank in 2005, when the Cube was surrepticiously transformed into a Rubiks Cube. Read here to see how they did it. 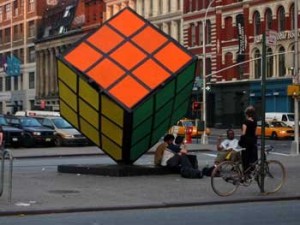 The Cube was removed for repairs and replaced with a ghostly version, called the Jello Cube, before returning in November 2005, shiny and new. The temporary, transparent pipe version was named the Jello Cube because Peter Cooper, who Cooper Union is named after, is the inventor of Jello.

The Cube has seen a lot of skateboarders, vagrants, tourists, and punks, and thousands of drunk people have been seen attempting a hearty spin at 2 in the morning. It now holds court to two Starbucks (three if you count the one upstairs at the Barnes and Noble), a K-Mart, a new drugstore, and the aforementioned bank and condo. When all those places move on or close, I fully expect the Cube to still be there.

Who knows how far into the future it may survive? 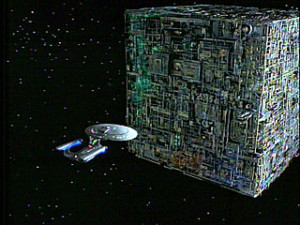