The New York subway was particularly bad this week, with a rainstorm that caused a transit calamity, paralyzing trains and leaving New Yorkers in hot, muggy tunnels waiting for transportation that never arrived. (Gothamist tries to get to the bottom of just exactly why our subway keeps flooding.)

However, maybe we wouldnt have this problem if, instead of electric tracks snaking under the city, we had a subway system powered …. by wind!

That was the basic premise for New York City’s first subterranean not-so-mass transit system, built in 1870. Alfred Ely Beach was a pioneer who predicted the city’s future underground trafficways. He just chose the wrong way of going about it.

Alfred visualed a system driven by air-power — literally a powerful fan that would push a car down a tube from one destination to another, in the same way bank drive-thrus utilize cans that zip the deposits of car-bound account holders down suction tubes to the tellers inside. (Picture Augustus Gloop in Charlie and the Chocolate Factory.)

The city was initially skeptical of such an idea, so Beach decided to build it without a permit. What I find striking about this is the location of Beach’s tunnel was a mere block away from City Hall. That, my friends, is what is called brio, also known as cojones.

The new subway — the Beach Pneumatic Transit — went all of one block, just east of City Hall, from Warren Street to Murray, underneath the length of a department store, and was intended as a mere demonstraton for a larger model.

Instead it became a novelty, drawing thrill-seekers in the same way the new spectacles at Coney Island later would. It was only a single car, but bedecked with draperies and gaslamps and even musicians, of a non-panhandling type not currently seen in today’s subways. 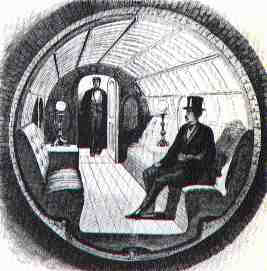 It operated for three years, until 1873, when the enthusuasm for the new device evaporated in the financial crash of that year. Beach was never able to convince the city of the usefulness of his creation, owing in part to Tammany Hall’s deep corruption of the time.

Other technology effectively knocked the wind out of Beach’s brainchild; a locomotive-drawn elevated track had been successfully tested up on Greenwich and 9th Ave and (hard to believe now) was preferred to an underground transportation which city residents feared would weaken the foundations of buildings.

That’s just a mere introduction to this weird, wild thingamabob of old from under downtown Manhattan. Check here for many, many other articles of the day describing this oddity.

While standing on a platform on Tuesday, completely drenched in sweat, nothing sounded better than a huge wind tunnel and a drapery-covered subway car.

1 reply on “The Short-Lived Thrill of the Windy Subway”

I went through your blog, it was good and I think could link it to mine. Please write me your opinion.
You could see this for it may help you a lot.
http://spiritualfacts.blogspot.com/