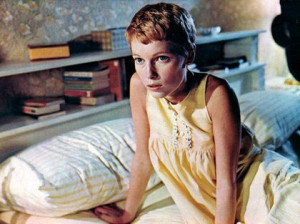 The Film Forum is in the midst of their five week NYC Noir screening series, featuring some of the best thrillers, mysteries and action films set on the streets of the city. In this blog every Thursday of the series, we’ll feature a bit about one of the films, and encourage you to go check out some of these classic flicks. Past entries of this series can be found here. Showtimes and other movies in the series can be found at the Film Forum’s website.

And killing two birds with one stone — as its also the topic of this week’s podcast — this week we feature a disturbing supernatural thriller Rosemary’s Baby and its primary setting, the Dakota Apartments, located at Central Park West and 72nd Street. 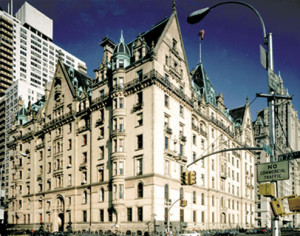 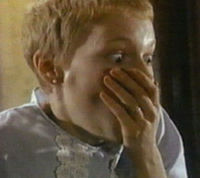 First of all, to correct a slip of the tongue from the podcast. No film has ever been shot in the interior of the Dakota. The exterior has been used in several films, most recently in Vanilla Sky, which may have given Tom Cruise and Katie Holmes the idea to buy a place there. The Dakota was first used in the 1949 Joseph Mankiewicz (All About Eve) directed film noir House of Strangers with Edward G Robinson. It’s safe to say that the Dakota is a perfect place for film noir. 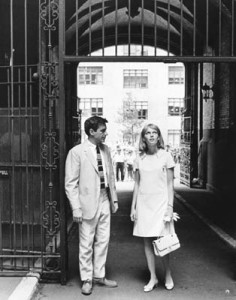 Here are stars Mia Farrow and John Cassavetes just inside the beautiful gated entry of the Dakota. When it was built in the 1880s, horse-drawn carriages rode through the gate to let out their passengers, then parked in the stables nearby. The center of the courtyard features a fountain, which greeted residents before they climbed up one of four seperate staircases to their homes.

By the way, it was while filming at the Dakota that Mia’s husband Frank Sinatra served her divorce papers. Tacky.

The Dakota is believed to have gotten its name from the preferences of developer Edward Clark’s towards the names of new American states (which represented ‘new money’). Others stories suggest that at the time of its construction, the new building was so far north that it would have been like visiting ‘the Dakota territories’. From this picture, that seems plausible: 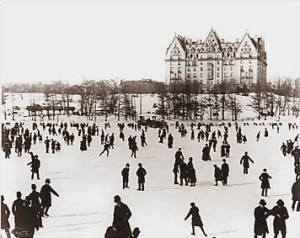 The Dakota was host to Manhattan’s artistic elite, the home of famous actors, writers and composers. According to the book “Upper West Side Story, a History and Guide” “The early tenants included the piano manufacturer Theodor Steinway and his friend the music publisher Gustave Schirmer, who liked to fill his salon with such brilliant guests as Mark Twain, William Dean Howells, Herman Melville and Peter Ilyich Tchaikowsky, who came to town in 1891 to donduct the opening night concert at Carnegie Hall.” Latter day tenants included Paul Simon, Connie Chung and Maury Povich, and of course the Dakota’s most famous tenants, John Lennon and Yoko Ono. 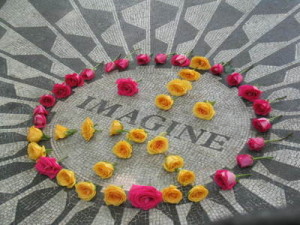 After Lennon’s murder in front of the Dakota — not far really from the grisly fake murder in ‘Rosemary’s Baby’ — the portion of Central Park nearest to the building was christened Strawberry Fields, and mural made of tiles from Pompeii was constructed in honor of the musician. The place has taken on a general purpose of celebrations and mournful gatherings: you’ll find people congregated there for the birthdays of living Beatles, the anniversary of Lennon’s death and even 9/11 memorials.

“Rosemary’s Baby” was filmed in other locations throughout the city, including stretches of Park Avenue above 42nd Street, the Time Life Building, and Tiffany’s. Here’s Polanski with Farrow rehearsing a scene: 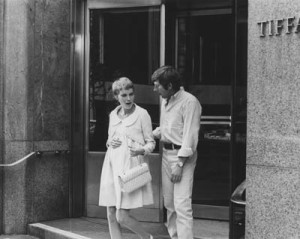