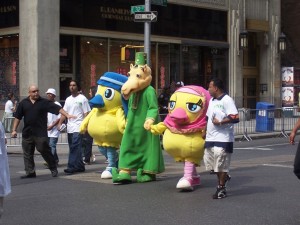 As I was threading through the city streets yesterday I stumbled upon New York’s annual Muslim Day Parade which marched down Madison Avenue with a few thousand supporters in costumes, floats and some really unusual mascot wear(see above). 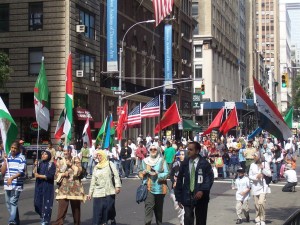 Depending on what you believe, the date of the parade (two days before 9/11) was either a transparent statement of support for America and peace, or a flagrant salt-in-the-wound tactic. Mayor Bloomberg had to issue a statement saying that he had no intentions of interfering with the event. 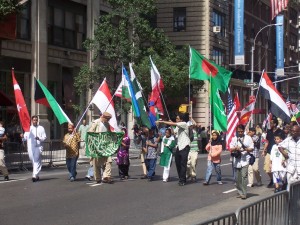 A few protesters, a couple groups of them actually, had no qualms however. 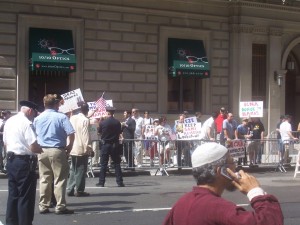 The parade was high-spirited and light; it felt more like a ‘family fun’ gathering. Some groups of people where chanting like cheerleaders. There was a little clashing between marchers and protesters but it was an otherwise festive occasion, from what I could see.

By chance, I caught the parade at its end, at a street parade which happened to be situated near the decorative Appellate Division of the New York State Supreme Court, at 25th Street and Madison Ave. This ornate, overly statued building has always fascinated me. Its busy with flourish, but its difficult to take it in all at once because it faces out on a narrow street, and the building across from it entirely overshadows it. 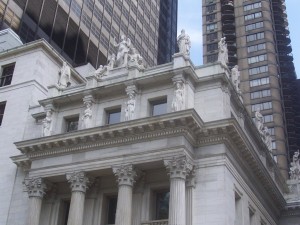 The architect James Brown Lord was actually told to spend a large amount of his budget on decoration, New York being in the middle of its ‘City Beautiful’ movement with lavish Beaux Arts influences. In fact, one third of its total budget went to ornamentation, which employed celebrated sculptors like Daniel Chester French. The interior is bedecked in murals, and a later renovation of the building installed a Holocaust memorial. 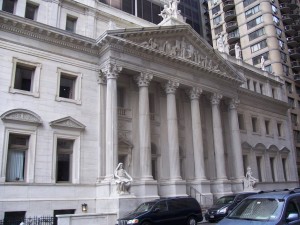 The building has a bittersweet relevance to the Muslim community actually. As you can see from above, tiny statues adorn the top, depicting icons of ancient and world law, including Justinian, Solon, Moses and Zoroaster. Do you happen to see a vacant spot at the very end at the corner? (You can click the pictures to make ’em real big and study the details.)

Mohammad once stood here, but in 1955 the Muslim community complained (55 years after construction, incidentally) that depictions of the prophet were not allowed, and the statue was torn down.

In this early photo of the building, you can see where the statue used to be, and can marvel at all the open space that used to surround this striking building! 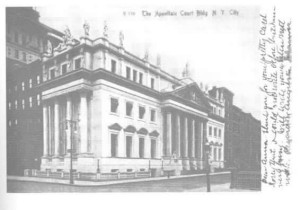 Incidentally, the best time to catch a glimpse of this building is in the morning, as its columns and statuary dramatically catch the rising eastern sun shining down the street. Madison Square Park blocks such lighting in the evening. Still its worth pausing for a moment in your busy day to marvel at.

Interestingly, the image of Mohammed stays on the front of the US Supreme Court building in Washington D.C.