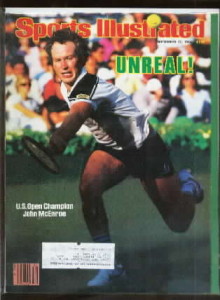 The tennis center is in walking distance to the sci-fi like ruins of the 1964 New York’s World’s Fair because its original structure, called the Singer Bowl after the sewing machine giant, was constructed for the fair. (FYI, Coney Island’s Parachute Jump was also constructed for a New York world’s fair, but the one in 1939).

The Singer Bowl has an unsung history as a site of some terrific New York concerts. On August 1968, The Who opened for the Doors, two diva performers whose attention to theatrics nearly sabotaged the show. The Who insisted that the Door’s equipment not mingle with their own and while performing, the rotating stage broke down. 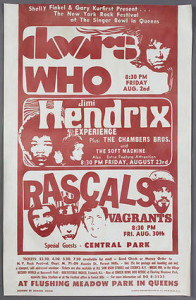 When Jim Morrison of the Doors came on, the crowd thronged the stage and policemen fought to keep them back. According to the Doors website, Jim “spun around and ground the songs out halfheartedly, ad libbing, improvising, doing an ominous dance” but was barely visible to the crowd due to the police. The crowd became incensed, ripping up chairs and throwing them onto the stage. During the chaos, Morrison was typically indifferent and oblivious.

The Singer Bowl fell into some disrepair until W.E. Hester, of the United States Tennis Association, flew over it while landing at Laguardia and suggested it make a new home for the U.S. Open, which had previously been held at the West Side Tennis Club in Forest Hills.

The Singer Bowl lost its name during renovations in 1977, when it was refitted as the Louis Armstrong Stadium, for the musician who lived out his final days virtually down the street.

The stadium was host to a fabulous rivalry between John McEnroe and Jimmy Connors, who batted the U.S. Open men’s singles title between each other for seven straight years.

However the popularity of the Open soon dictated that a bigger stadium be built. Louis Armstrong was upstaged, figuratively anyway, when the Arthur Ashe Stadium was constructed in 1995 and became the main court for the Open. Louis Armstrong Stadium was reduced in size and still hosts smaller matches. Both Arthur Ashe and Louis Armstrong stadiums and the rest of the complex was officially coined as the USTA Billie Jean King National Tennis Center in 2006.

Strictly speaking of the Flushing Meadows era of the the U.S. Open (since 1978), McEnroe is king, with eight wins (4 singles, 4 men’s doubles) but even he’s blown away by the reigning queen Navratilova with 15 wins (4 singles, 8 women’s doubles, 3 mixed doubles, including a win last year.) And she’s still in this year’s contest for women’s singles!

A picture of the old Singer Bowl, back before world class tennis and rock egos: 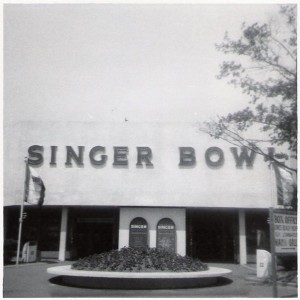 Can’t afford tickets to the Open? (Hell, I can’t!) You can watch it for free at various ‘tennis centers’ in Madison Square Park on 23rd and in Rockefeller Center, equipped with fancy bleachers, greens to relax on, and other amenities, sponsored by American Express.