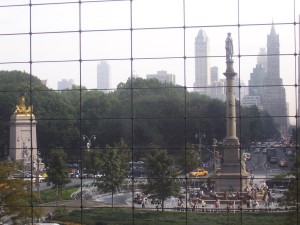 (the view of Columbus Circle and adjoining Merchants Gate to Central Park, from the second floor vantage of the Time Warner Center, click photo to see detail)

The Columbus Day Parade yesterday sailed through midtown turning everyone Italian, with not too much focus on the man who, in 1492, ‘discovered’ America, or so they said in elementary school.

About five years ago, Columbus discovered a shopping mall popping up behind him in his home in Columbus Circle. It is probably the first time in history one can say that a mall actually helped save a treasured landmark. 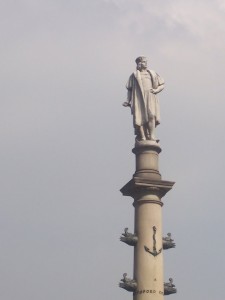 As envisioned by Central Park designer Frederick Law Olmsted, Columbus Circle and the swirl of traffic around it (designed by auto safety pioneer William P. Eno) was meant to act as beacon to Merchants Gate, one of the primary and grandiose entrances into the park. The tower and statue, paid for by the Italian publication Il Progresso, were dedicated in 1892 in honor of the 400th anniversary of Columbus’ famous voyage and to celebrate “the specialness of the New World.” As designed by Gaetano Russo, Columbus stares out over the city as though trying to decide where to grab lunch.

The monuments position was key, as the newly constructed elevated trains up the west side meant the area was rapidly developing, sweeping away grim warehouses and shoddy hotels, and this corner along the recently completed park would soon be one of the city’s focal points.

From the first of the century, looking pseudo-European and very inviting:

Thanks to poor city planning for decades, however, Columbus has been stranded in his own circle, an afterthought. The Maine Monument, that lavish gold statue honored sailors killed aboard the USS Maine, stands back a healthy distance from the traffic din, as if embarrassed.

For awhile the corner at the beginning of the century was alit with Broadway houses, fabulous cafes and even one of New York’s first jazz clubs. However a steady downturn and a disastrous array of bad architectural decisions ensured Columbus would be overshadowed. In particular, a convention center the New York Coliseum, with flat, window-less white walls, was built in the 50s, essentially pushing the Columbus monument against a blank, uninteresting surface. The massive skyscraping GW building (taken over by Donald Trump in the 90s) only worsened matters.

A couple images at its worst in the 70s (courtesy of Andrew Cusask’s blog) and one of its late 90s mid-construction look: 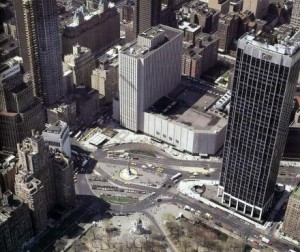 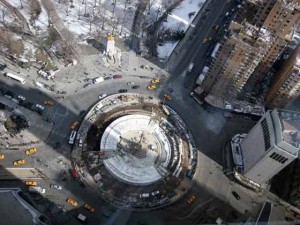 Remarkably, the mass development that took over the area a few years ago has actually worked to save the monument. A beautiful circular fountain and public plaza was installed, giving the statue some breathing room and allowing people to read the dedications to Columbia, in English on one side, Italian the other. 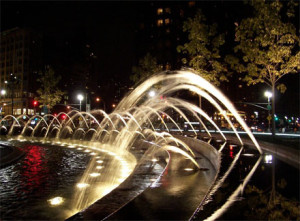 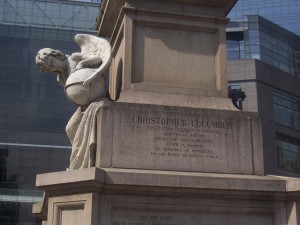 More interestingly the Time Warner Center and the Shops at Columbus Circle which rises behind it creates a striking contemporary contrast. The towers stand comfortably back and give the plaza extra breathing room. It’s so modern and pleasing that you may not even care that most views of the monument feature a big fat Borders bookstore logo behind it. It’s not perfect; like anything building up in New York these days, there’s a lack of specificity to it, as if it could be in any major city. But its a vast improvement to the recent past.

And for fun, here’s Columbus Circle in Legos by Sean Kenney: 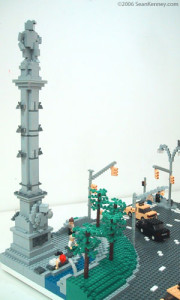 Shopping mall center is the best place to buy needs items. It is the best way to get needs items from one place. Now it is my favorite site. Sometimes I go to the place and buy everything from here. Lastly it is more helpful for me.