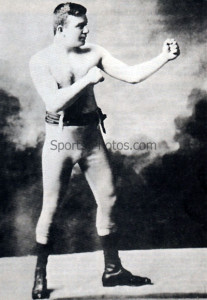 The streets are getting particularly clogged these days with film crews in New York. According to the Mayor’s office, expect to see the following on your block: Gossip Girl, 30 Rock, What Happened In Vegas (Cameron Diaz and Ashton Kutcher), Death In Love (Adam Brody and Josh Lucas), Burn After Reading (Brad Pitt and George Clooney, as directed by the Coen Brothers), the Incredible Hulk (Edward Norton and Liv Tyler) and of course, Sex and the City: The Movie. And that’s just a sampling of the better known films and TV shows. The list of lesser knowns is three times as long!

But ever wonder what the very first movie ever shot in New York City was? It also happens to be the first film ever shown to a paying movie audience at all.

A newfangled invention by Thomas Edison, the Kinetoscope, had been tested in New York, a result of Edison’s studios being in West Orange, New Jersey. In fact, New Jersey very nearly became our modern day Hollywood, as many silent films were being filmed there well into the 20s. But it wasn’t until May that New York saw both its first on-location film shoot AND its first film premiere. 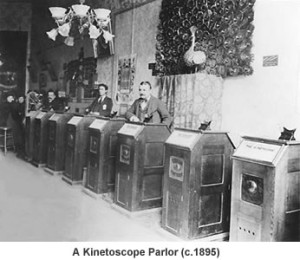 Otway and Gray Latham had invented the Eidoloscope projector (also called the Pantoptikon), running very crudely like a film projector today. However its image size was very small, about the size of a small TV set. The Latham brothers debuts test images to the press. But their real test of this device was to film something live and then display it a short time later.

So on May 4, the brothers filmed a boxing match on the rooftop of Madison Square Garden, then on 26rd Street and Madison Ave. The competitors were ‘Battling’ Charles Barnett in the ring with Young Griffo (pictured above), a legendary Australian boxer who was also a raging alcoholic and later ended up in an insane asylum. Boxing was actually a popular topic of Edison’s Kinetoscope machines and was a natural choice for the Lathams.

Sixteen days later, that four-minute film, Young Griffo versus Battling Charles Barnett, was displayed to a paying audience, at a makeshift theater in a storefront at 153 Broadway (a couple blocks up from Wall Street). By doing so, Young Griffo christened New York as a film capital, paving the way for the Scorseses and Woody Allens of the world.

Of course, even then, the critics were torn. “There is considerable room for improvement and many drawbacks have yet to be overcome,” said the Photographic Times. “Even in the present state the results obtained are most interesting and even startling. Quite a crowd of people visit the store … making their exit wondering “How it’s done”

Sadly, the Lathams’ achievement was quickly overshadowed. As some of you cinephiles may know from film class, the Lumiere Brothers delivered the birth of film in Paris later that year with a series of short films projected by CinÃ©matographe . And sadly, no extant copy of Young Griffo has been found. However Latham’s design did influence the design of later projectors, namely in the ‘Latham loop’ (pictured at right), a method of allowing the film that fed into a projector to slacken on either side, lessening the stress to the celluloid.

I heard they filmed it in Toronto because it was too expensive to film in New York.

They wanted to film a sequel, but Young Griffo wanted a share of the profits, so they replaced him with Joe Pesci.