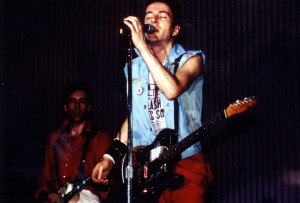 Bond International Casino — save for fifteen days back in 1981 — should not really be considered a “legendary” New York nightclub, by any means. But the space it occupies has a fascinating lineage, and as for those fifteen days, well…can any other nightclub in New York claim to have started what is called the ‘Times Square Riot of 1981‘?

The room was christened in the 1930s as the International Casino (the Bond would come in a bit), not a casino at all, but a swanky dinner club and cabaret that could cater up to 1,500 socialites, sipping on champagne while watching exotic shows featuring “novelties from five continents and the beauties of ten countries” on a motorized stage. Ads in 1936 proclaimed: `a Hollywood dream in theatre restaurants.’ Elaborate musical revue at 7.30 and 11.30 P.M. Minimum charge $2.50 â€” Saturdays $3.50.”

Such luxuriance was not to last, but the dazzle remained, from a most unlikely vector — men’s clothing. Bond Clothes took over the location as a men’s clothing emporium, and chose a flashy facade to match the rooms of garments inside. A huge neon sign held a clock in the O of BOND, alongside a 50-foot man and woman, an electronic waterfall and a news roll zipped along the front — all drenched in electric lights! It all looked especially dazzling at night, as the New York’s Eve ball drop pictures proves below: 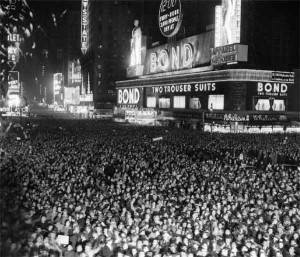 The elaborate sign gave way to a sponsor with bigger trouser pockets — Pepsi — placing gigantic soda bottles where the people once stood. Later the space was given over to a garish yet strangely hypnotic advertisement by Wrigley’s Gum: 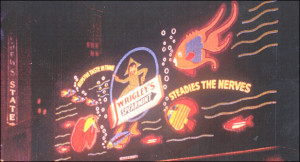 The clothing store itself lasted until 1977. Sitting vacant for a couple years — at the true nadir of Times Square, the grit and garishness of 42nd street spilling over — it was finally reopened under a new name, incorporating both its prior incarnations. The ‘International Casino’ returned, the ‘Bond’ sign stayed, and Times Square had its own rock club.

This new incarnation Bond International Casino had interiors, at 9,000 square feet, as theatrical as those in the past. The staircase from the entry level to the dance floor glowed as you stepped on them and played musical notes, not unlike, I suppose, the gigantic piano in the movie Big. The dancefloor, one of the city’s biggest (much bigger than even Studio 54), was overseen by sumptuous on-stage water fountains and inflatable people who hovered above and would fill and deflate to the music.

Cream Magazine called it “a shopping mall with bars and a dance floor… and telephone in the men’s room.” Here’s one of their flyers: 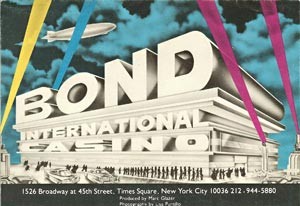 In this ad, you can get a sense of what the dance floor must have been like inside: 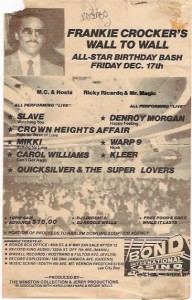 Over the course of its brief foray as a rock venue, Bond would see the likes of Blue Oyster Cult, the Plasmatics, the Dead Kennedys and Blondie. Always a slave to disco on regular nights, however, it would eventually give way to full-time usage as an early ’80s dance floor. But not before it saw The Clash.

The hot punk group, who had just released one of rock music’s most important records (London Calling) in January 1980, were back in New York to do a series of shows at Bond in May of 1981. Originally they were supposed to play eight nights. The promoters however dangerously oversold the show — 3,500 tickets each night for a venue that could only hold about half that!Â

Angry ticket holders rioted outside, filling the streets of Times Square, stopping traffic and drawing dozens of police officers to quell the rage. One website (with lots more information and more history on Bond and ‘the Clash riot’) claims Times Square “hadn’t seen that much commotion since … V-J Day.” The story made international news the next day. 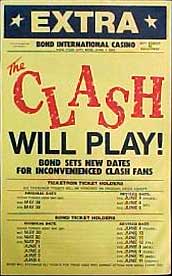 Cream says, “There’s confusion over the numbers game, and inside it’s a sardine sauna. Fire marshalls count 3600 heads leaving the club in what has been a testy evening. Support acts suffered, being booed and hissed by the diehard fans impatient for the arrival of their heroes.”

To assuage the angry ticket holders, The Clash took the unprecedented step of extending their stay at Bond to seventeen shows over fifteen days, to cater to all those ticket holders who were not able to get in. Perhaps stress and the threat of violence and fire brought out the best in the group; the performances are supposedly their best ever, and a bootleg of one of the shows “Live at Bond’s Casino” is considered the finest ‘unofficial’ release in the band’s history. (All seventeen performances are available as bootlegs.)

For those polite enough and lucky (or unlucky? I can’t imagine how unpleasant and scary that club must have been) to have paid attention to the first show, they would have also caught opening act Grandmaster Flash and the Furious Five, the godfathers of rap music. Somebody actually booed them?

Ironically, Bond couldn’t fill the club on any of their other nights, being a discotheque trying to survive in the Reagan ‘disco is dead’ era. In the ’90s, the space was taken over by the Roundabout Theatre Company, who for several years brought some excellent shows into the space.Â

It had two stages of different sizes, one classified a Broadway stage, the other off-Broadway. I saw a lot of great shows here back in the day, including Martin Short in ‘Little Me’ and an excellent revival of ‘1776’, starring Star Trek: Next Generation star Brent Spiner as John Adams. After several years, the Roundabout moved their stages to another former disco — Studio 54 — and another location on 42nd Street, the American Airlines Theatre.

Bond has a happy ending however. The space has reopened as Bond 45 restaurant and lounge, recreating the classic sign with some adjustments, and pomping up the front to resemble its ’30s glamour days. Of course, it sits between a Starbucks and a Swatch store, but you can run to the Virgin Megastore literally across the street and pick up some Clash CDs and memorabilia and start your own riot today. (45th Street, between 6th and 7th avenues) 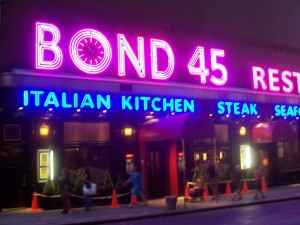 The fact that it stayed open and people liked it makes it legendary, especially in this day an age in NYC with all their 20×30 lounge spaces….All the big supeclubs are gone..People preder to sit around and “talk” and “drink”. Maybe it has an impact on the obesity in this country, no one dances anymore !!!

I was there that first night… unbelievable..

Those were the days! 🙂

I was there during construction, the first night and so on. I tended bar at the club. Those were the days.

I was there with my buds for at least three nights. Might have been more, but we were too wasted too remember them all. I remember when they booed Grandmaster Flash. It wasn’t because they were bad, it was just because we had been waiting so long for the Clash.

One night, we got up so close, we were treated to Joe Strummer slobber. I really miss Mr. Strummer. Shame he died so long ago.

My brother Peter and my neighbor John Wezenaar worked at Bonds. Bonds was owned by John Addison and Fifi Nicholas who were partners in the N.Y.N.Y. disco. Bonds was too big for is own good but many good times were had there.

I now teach at a nearby university and each time I pass by this area have a deja vu feeling…wow, those were the days of wine and roses! Saw many major celebs, yet nobody bothered anyone…we would dance the night away…drink to our hearts’ content…

I have a BOC show that was possibly a radio broadcast from 6/16/81. It sounds great so it’s either sound board or radio.

I remember going to BONDS (at the tender age of 17). during a high school trip to NYC, from CO. One of our school chaperones caught the eye of the bouncer, while waiting at the entrance. He told her she can come in, She said “they are with me” and that got all of us in! I remember walking up the lighted, musical stairs and the rest was history (to me!)!

i used to love the musical escalators…. and the waterfall on the dancefloor…remember?:)
oh and Disco Sally on rollerskates( you might of missed her since you were out of town)!
Those were the days of Chic Disco nightlife in NY..77-80′.

I was also at that first Clash Bond show. Luckily I was inside and not part of the violence (hardly) outside. A couple things to add, however…
1) Regarding booing Grandmaster Flash: Remember the year. 1981. Not one Clash fan had ever heard of rap music…so take a bunch of overheated, impatient Clash/punk fans – add a guy spinning dance records (which sounded a whole lot like disco), and you have a recipe for a very bad reaction. It was much worse than booing, I assure you. Bottles were thrown. But Strummer chastised everyone when he got on stage (and did their usual lousy set – terrible live band, great records). I think he, more than anyone, is responsible for opening up hip hop to the white punks of the USA.
2) The REAL crime of the massive ticket overselling was that The Specials, The Selecter, The English Beat, and Bad Manners were supposed to play successive nights once the original Clash residency was done. I had tickets for all of them. They were all cancelled when the LAFD got the promoters to agree to the extension. Ugh! Took me another thirty years before I got to see The Selecter live.
Anyway, thanks so much for these posts…really brings me back to the glorious and infamous pre-Giuliani Time Square filth!!

the LAFD? do you mean the NYFD?

That was a great club in 79’saw a Betsy Johnson runway show- Fabulous! The water show moved with the fantastic sound system which was produced at the right moments,those figures that would blow up above,the escalators played distinct sounds as you move up to the main room. The age of the super discos only NY could provide- The dance floor was so huge I would bring my roller skates- even danced with Disco Sally!-lol those were the days!
Xenon, Studio 54, Bond, and the Paradise Garage-those were the winners!

We went opening night and many times after that. I guess some of the main things I remember is how packed it was when GRACE JONES performed there. The dancing waters I was told were left over from the LIBERACE TV SHOW …. people actually got naked and wet! It was 110 inside but below freezing outside so I kept my clothes on! I had no towel to dry off otherwise I would have joined them! I remember the real orchids ….the crowd was amazing, STUDIO 54 was closed when we went there, then it re-opened and we went back to STUDIO 54. NYC NIGHTLIFE was fun then.

[…] the International Casino, a theater hall on the corner of Broadway and 45th Street, in the 1930s, according to Bowery Boys. They write, “Bond Clothes took over the location as a men’s clothing emporium, and chose a […]