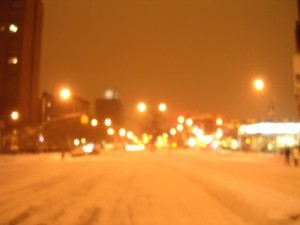 I’m going way meteorological on you today. It’s already gotten pretty cold in New York City this month, striking 21 degrees F on Sunday, assuring that a replay of last year’s relatively mild winter may not be in store. Come, let’s reminisce. The record high temperature in New York City for winter was on January 7 …. of this year. 72 gorgeous, downright tropical degrees.

New York certainly isn’t the coldest city in the nation or even the state, but it’s often come close. Since 1871, New Yorkers have experienced below-zero Fahrenheit temperatures a whopping 58 times. Of course, the last time it dipped that low was in1994, and hasn’t gotten below -2 since 1943. But it still gives me the shivers.

The absolutely coldest day New York City has ever seen was -14.3 degrees F in February 9, 1934. The cold snap deep froze the entire Northeast; Lake Ontario froze and Rochester plunged as far as -20 below. Here in the city, to make matters worse, all the cabdrivers were on strike. The Great Depression was in full swing, with many homeless and poor standing freezing in breadlines or huddled in unheated tenements.

The second coldest NYC day on record did take on December 30. But that was ninety years ago — 1917.

Just in case we ever happen to see that -14.3 temperature again, take cold comfort in the fact that, with the city’s massive energy expenditure and insulation in the form of tall buildings, it would feel much warmer. Like, you know, a mere -6 or -7.

Am I depressing you? Lets think back to 72 degrees….