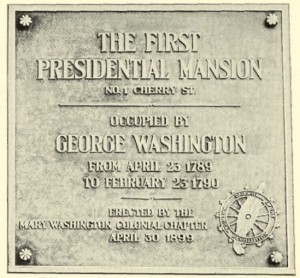 You’ll be forgiven if the corner of Pearl and Dover streets does not happen to ring any bells for you. Although nearby a few South Street Seaport restaurants and bars — including the Bridge Cafe — its mostly unused given its proximity to the entrance of the Brooklyn Bridge and FDR Drive.

But a sad, tiny plaque here uncovers a surprising fact — here once stood the first presidential mansion of George Washington. The nation’s first president lived here from April 1789 to February 23, 1790, just a short carriage ride to Federal Hall on Wall Street. His inauguration procession on April 30th even began here with a reception for the new nation’s creators.

This was considered uptown to Revolutionary era New Yorkers, and the white Colonial home, built in 1770, was surrounded by other sumptuous houses overlooking the East River. In fact, Washington’s neighbor, at 5 Cherry Street, was John Hancock. DeWitt Clinton would later reside in the former Washington home.

Cherry Street still remains in lower Manhattan, but the section which once included the presidential mansion and the other austere residences was demolished in the 1880s to make way for the Brooklyn Bridge anchorage. That might seem scandalous to modern-day history preservationists, but by then, Cherry Street was far from a tony address.

One Cherry Street was unceremoniously torn down to widen the street in the 1850s, but by then, it was a mercy killing. The neighborhood had become New York’s notorious Fourth Ward, lined with saloons and brothels, the once-glorious mansions turned into boarding houses. It was Manhattan’s most decrepit neighborhood, so few took offense when it was proposed that the neighborhood be partially demolished to make way for the Brooklyn Bridge entrance. Cherry Street still exists but only on the north side of the bridge.

Georgie moved from One Cherry Street to 39 Broadway — shorter commute — in 1790. The tiny plaque is all that remains of a far more genteel day in lower Manhattan.

Here’s more information on community efforts to raise the profile of the site.

Picture of the presidential mansion that once sat there: 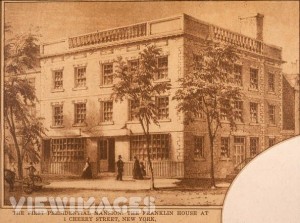 Thank you, I am reading Chrenow’s excellent biography on George Washington, and wanted to know where this was in NYC. I am in the city frequently and had no idea about this.

I am currently reading same and came here to find 10 Cherry.

I just read that William M. (Boss) Tweed, former head of Tammany Hall, was born in this same house. At least, that is what is written in a Wikipedia Entry.