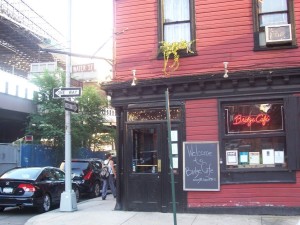 The Bridge Cafe, a quiet bar and brunch destination underneath the Brooklyn Bridge at the corner of Water and Dover streets, has a storied legacy as the oldest tavern in New York City. Although it does take a bit of imagination to envision the red wooden building as former home to the most despicable, most vile and — let’s face it — most fabulous characters in our fair city’s history.

The legend of the Hole In The Wall derives mostly from one place — Herbert Asbury’s infamous ‘Gangs of New York’, a dastardly inspection of New York’s 19th century criminal lowlifes and squalor. As such, given the books fanciful and exagerrated nature, you can’t exactly use it as faithful reference. When journalist Richard McDermott began doing research on the Bridge’s background, he didn’t even find the Hole In The Wall.

What he did discover was a tradition of booze swilling that began with a ‘wine and porter bottler’ in 1794. It was followed by a grocery — one that I guess technically sold liquor, thus keeping the ‘oldest tavern’ title precariously intact. But the date 1826 is most significant as the establishment fell into the hands of Charles G. Ferris, an attorney who leased the property to a host of saloons.

And there were patrons aplenty, for this was New York’s dangerous Fourth Ward; in particular, Water Street was festooned with brothels, boarding houses, dance halls and watering holes. In 1866, writer Bayard Taylor referred to it as “the only rival of the Sixth in its triple distinction of filth, poverty, and vice.” (The Sixth being the Five Points slum, about a half mile away.) ‘On The Town in New York’ by Michael Batterberry says, “Generally speaking, Water Street was a thoroughfare of vice and iniquity to challenge the imagination of the most graphic Victorian preacher.”

So although little evidence remains of a Hole In The Wall in the precise vicinity of the Bridge Cafe, it’s extremely likely such a place existed.

(The picture below is not of Hole In The Wall, or of any particular Water Street saloon, but a print of a New York ‘lager-beer saloon’ from 1870. Sorry, there aren’t a lot of photographic options from this period of time!) 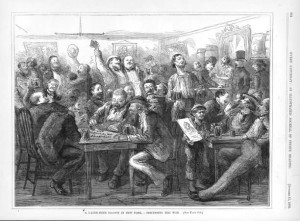 Few tavern staffs today could compare to those of Hole In The Wall’s proprietor ‘One-Armed’ Charley Monell. We’re assuming that sobriquet wasn’t just a cute nickname. For security, he relied on two lovely ladies by the names of Kate Flannery and scrappy Gallus Mag. No ordinary bouncer, Mag kept a pistol at her waist, a club at her side and for good measure sharpened her teeth like a rodent. This was not just a fashion statement; she would need such sharpened incisors for when she would bite off the ears of unruly patrons, spraying blood with delight as she deposited the ear into a gigantic jar behind the bar. (Mag is immortalized in the film version of ‘Gangs of New York’ as well as virtually tributed in every horror movie from ‘Texas Chainsaw Massacre’ onward.)

Gallus (a word for men’s suspenders, which she would frequently wear) wasn’t always so cruel. After chewing off the ear of a female rival named Patsy the Goat, she later gave the body part back after the two mended ways. It’s a plot right out of ‘Sex And The City’, I tells ya. 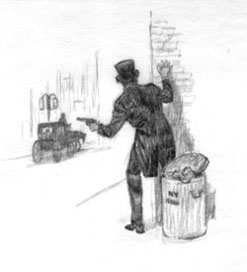 Sex, sinful dancing and swill — sometimes drank right out of the spout for a small price — were orders of the day on Water Street, as was murder. The most famous brawl in perhaps all of Water Street occurred here between two thugs named Patsy the Barber and Slobbery Jim, both probably teenagers or in their early 20s. They were members of the gang the Daybreak Boys (ahem, I’m sure they were no match for the Bowery Boys), responsible for dozens of deaths in downtown Manhattan in the 1850s.

One day, Patsy and Slobbery casually robbed and killed a German and threw him into the East River. Settling down at Hole In The Wall with their booty (all of twelve cents), the pair fought over the amount, with Jim thinking he deserved more as he did single-handedly throw him into the river.Â

Soon the boys were brawling, Mag and Charley stepping back to watch it play out. Patsy had a knife and stuck it into Jim; the knife changed hands and was soon lodged into Patsy’s throat. Patsy passed out from blood loss, and Jim finished the performance by stomping into his partner until he expired. Ten years later Slobbery would enlist in the Confederate Army.

According to Asbury, the Hole In The Wall was permanently closed after a string of seven murders were committed there in less than two months. However, if Bridge Cafe is indeed the former home of Hole In The Wall, it clearly didn’t stay closed for long. It passed through the hands of several saloon owners, including a city alderman Jeremiah J. Cronin in 1898. Even Prohibition couldn’t dry it out; a restaurant in the ’20s served beer on the down low from bootlegger Charlie Brennan.

The current incarnation opened in 1979 and was a favorite of former mayor Ed Koch. Today you can have a good brunch there and just stare down at the floor, picturing Patsy the Barber, pools of blood and a few loose ears lying around.

On June 12, 1872 The New York Times reported: Joseph K. Hudson, a mate on the ship Pacific birthed at pier 9, while drunk, went into the den number 14 Diver Street [a side entrance to 279 Water Street] known as The Hole in the Wall. He was robbed of his watch and chain. This is [to date] the only evidence that today’s Bridge Cafe is the site of Asbury’s story.

Diver Street above should read as “Dover Street.”
Slobbery Jim (James White) killed Patsy in a porter house at 361 Water Street. See the NY Times June 6, 1859.
The 12 cent murder is covered in The Times on January 27,1852.
Herbert Asbury, as usual, has it quite wrong.