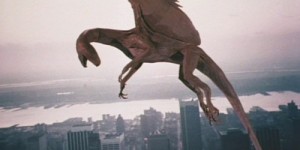 BOWERY BOYS RECOMMEND is an occasional feature whereby we find an unusual movie or TV show that — whether by accident or design — uniquely captures an era of New York City better than any reference or history book.

By the early 80s, New York City has already seen its absolute nadir as a fiscally and morally bankrupt urban center and was fully comfortable with its place in the gutter. The crime rate wouldn’t improve for another decade, but at least Wall Street was picking up the city’s financial fortunes by the lapels. Punk is strangling disco in the back alley, the city struggles through transit strikes, smog and a sudden rise in homelessness.

So it is in that light in which the piece of glorious grade-A schlock “Q: The Winged Serpent,” released in 1982, must be judged.

Chrysler Building architect William Van Alen would be horrified to learn that the graceful tapering top hat of his most famous building becomes home of a loathsome flying dragon and a gigantic nest of eggs. As if possessed with a little of Van Alen’s spite at being quickly overtaken in less than a year by the taller Empire State Building, the first scene of “Q” involves the dragon popping over and snatching off the head of an Empire State window washer.

Q swiftly makes a go at New Yorkers sunning themselves on rooftops or in private swimming pools, an inverted Jaws scenario. As such, her victims are mostly upper class, young and rich. There’s a perverse joy at seeing a montage of New Yorkers staring into the sky and being slathered in fake looking blood.

Q also has a ball hanging around the pyramid-topped Bankers Trust building in the financial district. Curiously, few New Yorkers notice this massive monster jetting between uptown and down.

Just how did a winged serpent (it really looks like a dinosaur from Land of the Lost) get to Manhattan? According to the ham-fisted plot, it involves an ancient sacrificial cult, located at the Museum of Natural History, who have summoned the Aztek god Quetzlcoatl via a trail of skinned, sacrificial bodies.

David Carradine and Richard Roundtree (Kung Fu and Shaft) lead the investigation, in a depiction of the New York police force that is hardly flattering. Michael Moriarty is a sad-sack conman — roughed up down by South Street Seaport — who discovers the serpent hideaway during a completely superfluous chase scene through the Chrysler.

And, oh, did I mention the cop dressed as a mime who stays in makeup for the whole film? Whatever happened to the good old fashioned New York mime, I ask you? 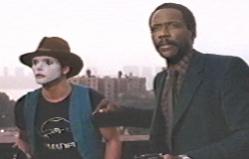 By sheer function of the story, “Q” happens to be one of the best depictions of New York City in the early 1980s. That’s because the ‘serpent’, in all its cheesy stop-motion glory, frequently soars over New York midtown, allowing the viewer to soak in its former splendor. I had a blast freezeframing these scenes and trying to figure out what I was looking at; given the swift makeover of midtown Manhattan, its harder than you think.

Director Larry Cohen, known for other B-movie fare like ‘Black Caesar’ and ‘It’s Alive’, supposedly got the entire idea for the film by looking up at the Chrysler and thinking, “That’d be the coolest place to have a nest.” Probably not the reaction Walter Chrysler wanted when he first commissioned it.

“Q: the Winged Serpent” is currently available on DVD and is probably shamelessly gathering dust at your local video store.

By the way, should we be surprised that the Natural History museum is currently hosting an exhibit called Mythic Creatures that actually features Quetzlcoatl?

1 reply on “Monster madness at the Chrysler Building”

What a great show!!! As a born there, but live in Ca. guy, I so appreciate the great work you two do to research such interesting stuff. You certainly don’t need a “listen ’till the end” hook for me. I’ll be there when you finish.

I’ve loved them all. But especially – Coney isl. and the Zoo.

I listen in my car with an iPod filled at iTunes. Can you tell them that I love you(s) or is there a way I can?