Ah, the classic Chrysler Building! She’s got style, glamour and all that jazz. But what magical surprise did she spring on New York in October of 1929? Join us as we tell the story of New York’s most beautiful art deco treasure.

The picture above is of famed photographer Margaret Bourke-White, who had an studio on the 61st floor of the Chrysler. Her iconic photographs of the building helped create the building’s mystique as a sleek, magical tower. Of course later, as a correspondent for Life Magazine, she became one of the most intregal documenters of World War II, particularly the bombing of Moscow. 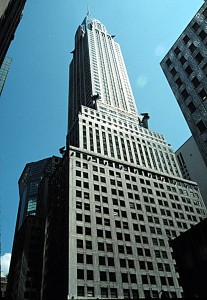 One unusual aspect of the Chrysler building is that it’s ‘something you look up at’. At street level and for several floors up, its a rather drab structure. In fact there are many buildings nearby that exhibit a far more striking art-deco style at street level, including the Chanin Building just across the street, and the Daily News Building a block away. 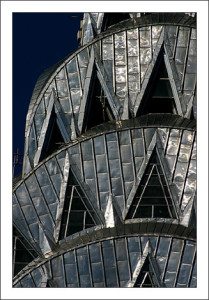 But the top of the Chrysler more than makes up for it, with its silver spire and repetitions of triangular sunbursts draped in silver nickel steel (a specialty metal called Nirosta designed by the German company Krupp). The real punch of the Chrysler at night comes with these triangular windows, with their almost crown-like appearance, which pierce the night and create truly dramatic scenes on foggy evenings.

The Cloud Room, a swanky nightclub and speakeasy in the 30s, occupied the top floors until the 1970s. As with many things in New York at that time, the building fell into disrepair in the 70s and 80s; thankfully much of its luster has been returned thanks to the current owners Tishman Speyer. Given the recent trend of restoring New York landmarks to their former glory, might we see a return of the Cloud Room in the near future? 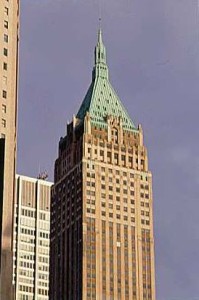 The 40 Wall Street building, still impressive but far less ornate, has had a rather rocky history. Referred to as the “Crown Jewel of Wall Street,” it held the title of world’s tallest building for all of four days. At one time known as the Bank of Manhattan Trust Building, it was hit by a Coast Guard plane in 1946, killing four people. In the 90s it was bought by Donald Trump, who funded extensive renovations and turned it all to commercial space. It’s actually called The Trump Building now. The American Express headquarters is housed here. According to Real Estate Weekly, 40 Wall Street is the tallest mid-block building in the world, which I guess has some sort of cache.

Incidentally, a former 40 Wall Street building which stood in its spot was office to the first president of the New York Stock and Exchange Board when it was first organized in 1817.

As for the Severance’s former partner, Van Alen did bask in a brief fame as architect of the Chrysler, despite Walter Chrysler’s refusal to pay him the remainer of his commission for the project due to bribery. Perhaps strangely, his most circulated photograph actually has him dressed up as the Chrysler Building. The event was the 1931 Beaux-Arts Ball for the Society of Beaux-Arts Architects. Van Alen was a student in Paris’ Ã‰cole des Beaux-Arts and was a regular attendent at these high-class and often rowdy functions. This New York Times article gives a thorough recap of the event. But just to put it in perspective, many architects came that year dressed as the buildings they created, including William F. Lamb as his newly constructed Empire State Building. The jovial bunch is featured below:

And finally, I apologize for giving short shrift on the podcast to the work of Edward Turnbull, who painted the brilliantly colored ceiling mural in the lobby of the Chrysler Building.

A mixture of Sistine Chapel magnificence and perhaps a bit of prescient Communist-esque propaganda, “Transport and Human Endeavor” is actually one of the largest indoor murals in the world, displaying an enthusiasm for American progress and mechanical ingenuity. Lit in the warm glow bouncing off the marbled wall and oak floor, the mural hides many fascinating details full of blimps, airplanes and automobiles. Just make sure you dont stumble over one of the building security guards as you look upwards.

You can find another lovely picture of it here 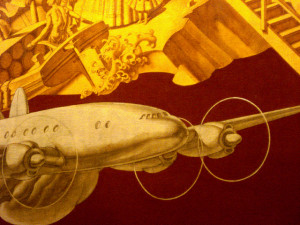 4 replies on “PODCAST: The Chrysler Building”

Nice work. I think this podcast was your best so far. Nice narrative and excitement. Keep it up.

Can you imagine any modern architects wearing those head pieces AND having their pictures taken? Truly classic.

Can you imagine Miss Hannigan saying “You’re gonna scrub this dump til it shines like the top of 40 Wall Street”?

The last picture is actually at Rockefeller Center in the old Eastern Airlines Building and is a 3 wall painting. It’s amazing. The Chrysler Building’s ceiling and wall murals are beautiful as well.