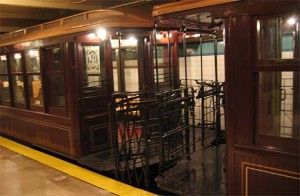 Our tribute to an off-the-beaten-path museum or landmark that you may not know about. Instead of MoMa, why not try out one of these places? Past entries in this series can be found here.

Okay, I know I’m stretching when I call the NYC Transit Museum ‘off the beaten path’. Its advertised in every available form of transit, and city guides all feature it. However what makes it unusual is the format in which they present their collection.

First of all, its actually in a subway station, the former Court Street station of the Fulton line. Built in 1936, it was in service for all of ten years, closed because many trains are already available in the area; you can catch the 2, 3, A, C, E, F, B, D, N, 4 and 5 trains within just a few blocks. So yeah, they didn’t need it. It remained unused until the museum opened in 1976.

Like all museums I particularly fancy, the Transit Museum has an awkward, slightly out-of-date charm to it. Partially because the newest addition — On the Streets: New York’s Trolleys and Buses, featuring interactive displays — is situated last, you get an immediate assault of nostalgia, both in the things presented and in how things are presented.

This isn’t a complaint. Each exhibit should have its own feel. You go immediately into Steel, Stone & Backbone: Building New York’s Subways 1900-1925, displaying photos and placards in a low-ceilinged display to give you (perhaps too well) that claustrophobic feeling of digging a subway tunnel.

Things open up considerably from there. Waiting outside is a depiction of tokens through history, as well as various styles of turnstiles: 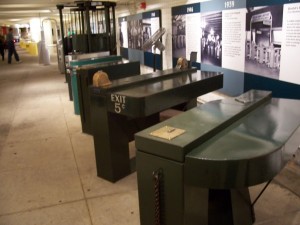 On the lighter side is a fun display of children’s transit-themed toys throughout past two centuries. Here’s one that must have delighted some kid with a penchant for the circus: 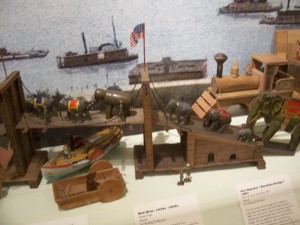 To my surprise, I discovered some artifacts that I could easily have found in my parents garage. (NOTE TO TRANSIT MUSEUM CURATOR: I’m pretty sure my folks still have my Fisher-Price Sesame Street scene if you need it). 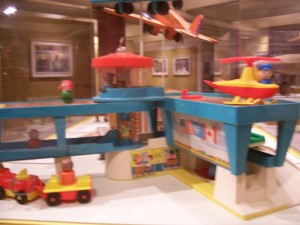 After briefly perusing the exhibit on the Triborough Bridge and some transit-themed paintings, I was ready for the really fun stuff. On the Streets is a particularly kid-friendly display, with sections on city smog, a timeline of horse-drawn conveyances, a day in the life of a city bus driver, not to mention a real live city bus without chewing gum on the seats!

For some reason I was totally transfixed by a display of mini-traincars, which appeared to be more an artistic installation than an actual historical display: 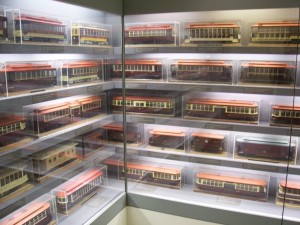 Past the buses and trolleys is a room full of tables (presumably for kids parties) and walls of old signage dating from the first subways. As a geeky lover of fonts and designs, I wanted to snatch some of these off the wall and take them home with me: 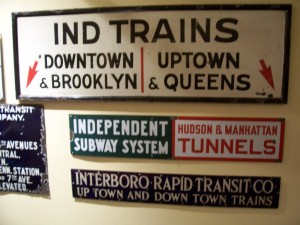 Easily the Transit Museum’s best feature, the ‘sexiest’ part — worth the cost of admission alone (a whopping five bucks!) — are the presentation of 19 original subway cars, from the very first one up to the 1980s. You actually go down into a subway tunnel, and there they are lined up.

You don’t think that going in and out of empty subway cars would be all that fun. But oh, my friends, you would be wrong.

Every decade apparently had a color scheme they thought would be pleasing and natural to the morning commuter. For instance take this car from the 1940s: 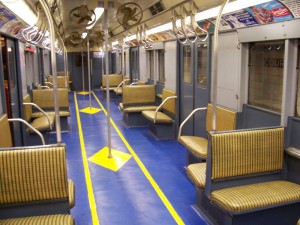 Each car is decorated with advertisements from the era and each has been preserved excellently. All they’re really missing is graffiti and a weird smell.

The cars from the 70s were of a particular treat, as with a few alterations, they could have been used on a 70s sci-fi television show like Buck Rogers: 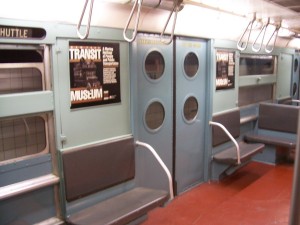 You also realize how perceptions of comfort have had to cave to the necessities of maintenance. Take this view of one of the first train cars ever used, from 1904. The seats inside were comfy and plush, and the entire room had a feel of your grandmother’s parlor. 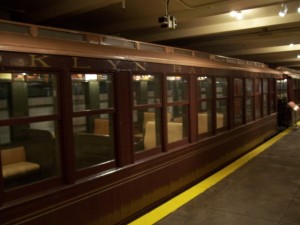 It’s for this reason that I think life-long, jaded New Yorkers would get a kick out of the Transit Museum, and why it’s a must stop for visitors. Its a fitting tribute to the biggest, and one of the oldest, transportation systems in the world.

Most unintentionally funny part: voice-over announcements of events at the museum are as muffled and unclear as any service change in the regular subway!

Check here for information on hours and direction.They also have an easily accessed annex at Grand Central Station, although it clearly doesnt have all the subway cars.

Coincidentally, this was the very first excursion of the Tour of the Month Club! Definitely a must-see for all New Yorkers.

And a sidenote: two years ago, while waiting for an express train at 96th Street, an old train car (I’m guessing circa 1950) pulled up on the track. Everyone got on and ran around like a group of elementary kids, looking at all of the intricacies of the car. When it dropped us off at 42nd Street, everyone applauded and cheered! It’s one of my favorite memories of living in New York.

My father and I were at the Transit Museum the day of the tornado. We wondered why it was so empty until we realized, most likely, most visitors couldn’t get there because the subways were down.

Interestingly enough, the Buenos Aires subway system was built around the same time as the NYC version. One of the lines still uses the original train cars from the 1920s with plush seats and everything providing proof that Latin lovers are a gentler species New Yorkers. Wasn’t there just a podcast about the animals in the Central Park Zoo getting loose?

Next time I’m home I’m going.
Thanks for this blog and your podcast! I love any tidbits about 19th and early 20th century NYC, though I’m enjoying your shows about stuff even later than that, to my surprise.
Hope you continue on sharing this great history with us!

A great place to visit. I remember
the 1940 trains when I took the
subway going to High School (Brooklyn) in the early sixties.
The fans were high tech, even then.
Highly recommend and thanks for a great site!