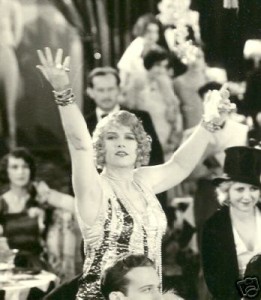 We’re reaching way back for this week’s entry, to the heyday of New York nightlife, the 1920s, when prohibition hardly prohibited anything. The underground speakeasy The 300 Club at 151 W. 54th Street was one of the most successful, despite being raided many, many times, and all because of one scrappy, lovable dame.Â

Ladies and gents, I give you New York’s reigning queen of nightlife, Ms. Mary Louise Cecilia — but the boys call her Â “Texas” Guinan.

Born in Waco in 1884 to Irish immigrants, she coined her nickname on the youth rodeo circuit, then ran off to New York for a short stint in vaudeville. Her cornfed, bawdy charms caught the eye of a movie scout who rustled her to Hollywood, where she became the silent era’s first movie cowgirl, starring in a string of corny Westerns — The Girl Sherriff, The White Squaw, The School M’arm, Little Miss Deputy.

But New York lured her back, where saloon owner Larry Fay (his speakeasy El Fey Club was on West 47th) convinced her to crack open her own establishment. And the 300 Club* was born. 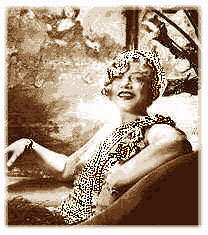 The bar practically bristled with Guinan’s outsized personality. Its relatively small size worked in its advantage, especially as 40 fan dancers flew from the wings and had to basically dance in the aisles, to the delight of those tippling the bar’s illegal sauce.

Texas was always around greeting customers with her signature slogans, “Hello, Suckers! Come on in and leave your wallet on the bar!” and “Give the little ladies a great big hand!”

It wasn’t just the underbelly of New York captivated by Texas’ charms. The toast of the town often popped by to ogle at her dancing beauties, including Rudolph Valentino, Gloria Swanson and Pola Negri. Young composer George Gershwin would sometimes leap to the piano and pound out a ragtime. She also took a young Walter Winschel under her wing, a man who would later become the most influential gossip columnist of the 1930s and 40s.

With all that attention, it’s no surprise the club was perpetually raided. Guinan never once admitted she sold liquor, claiming her hundreds of customers had brought it in with them. According to one adoring fan site:

“Legend has it that the joint was raided one night when the Prince of Wales was there. She popped an apron on him and hid him in the kitchen, washing dishes.”

After a few weeks she would reopen, and the party would begin again. Occasionally, she would have to move to different locations, and reopen under different names (Salon Royale, Club Intime, the Argonaut), but she always returned W. 54th Street, where the legends of the jazz age were bred.

It ended a little too soon for Texas. The Great Depression rolled over her good fortunes, and she attempted to take her show on the road, touring the United States. (She even attempted to take it to Europe and was denied a permit to perform in France due to Texas’ notorious reputation.) While in Vancouver, she contracted dysentery and died in Nov 5, 1933, age 49.

The tales of her midtown speakeasys have helped to shape our entire perception of New York in the 20s, with its excess and abandon. Guinan herself lived on as an primary influence to Mae West. In fact Guinan was actually considered for West’s debut role in the film Night After Night in 1932.

(By the way, today is Mae West’s birthday.) 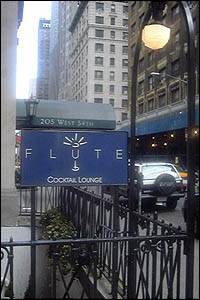 You can still have a drink at Guinan’s speakeasy Club Intime; the space where she once entertained New York’s greatest is now the champagne bar Flute . The location of the 300 Club has been turned into The London luxury hotel.

She literally was the end of an era; the day after she died, the US government repealed prohibition.

Texas Guinan lives on in an incredibly exhaustive blog in her honor and in reruns of Star Trek: the Next Generation (Whoopi Goldberg’s bartender character is named after her). Who knows what mayhem Texas would be getting herself into if she were alive today.

*I admit I couldnt find anything on why it was called the 300 Club, however it could be because when customers would ask her how many films she had made in Hollywood, she always answered, “About 300 of ’em.” Even though it was more like a couple dozen.

wonderful,
thanks for this post, and keeping old nyc memories alive!!!