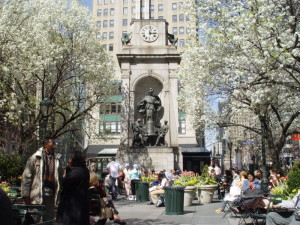 Lovely Herald Square once again becomes the center of manic activity next week for next week’s Macy’s Thanksgiving Day Parade. Few realize that Santa Claus, the Rockettes, and a throng of tourists share the square with a Roman goddess and two fellows named after Hebrew demons. Or that this year, said goddess and demons will probably be the best looking partygoers there.

The James Gordon Bennett monument, or Bell Ringer’s Monument as it’s often called, with illuminated clock, friendly bell that chimes on the hour and owls with glowing eyes, has been a solid fixture of Herald Square since November 1940.

Bennett Jr. was the publisher of the New York Herald in 1894 — Bennett Sr. actually founded the paper in 1835 — when they moved from downtown Park Row up to 35th Street, immediately north to where the monument now stands. The two story Herald building, in an Italian palazzo style by the great McKim, Mead & White, was topped by the sculpture designed by French sculptor Jean-Antonin Carles. The Herald later merged with another newspaper the New York Tribune, and the Herald building was torn down in 1921. But the monument, popular with New Yorkers due to its glowing timepiece, was reinstalled in the park below.

The primary figure is the goddess Minerva, Roman deity of poetry and music, often analogous to the Greek goddess Athena. More curiously are the bell ringer’s below her, who have two sets of names. Stuff and Guff are the cutesy names; Gog and Magog, also known as early demonic beings from the Old Testement, are rather less cute. Minerva’s companions in classical literature are owls, which explain the birds with eyes that glow upon the hour, as though lasers are about to incinerate passers-by below.

The monument has always been a mystery for some. A mysterious door on the 35th side is inscribed with the phrase “La Nuit Porte Conseil(‘Nighttime Brings Advice’ or ‘Let’s Sleep On It’)” which has never been adequetely explained. A website on magic maintains the Herald Square statuary is loaded with mystical, even demonic iconography.

The bell ringers don’t actually ring the bell but merely go through the motions, with a mallet inside timed to make the hourly chime. That is, the ringers never did until a few years ago. The condition of the monument had deteriorated to an extent that one of the ringer’s mechanisms were beginning to actually scrape the side of the bell. The overall condition of the monument was pitiful, covered in bird droppings and weakened by the elements. Its granite base has even begun to crack.

So just this year, the Municipal Arts Society funded an impressive $200,000 restoration, encasing the monument in scaffolding for four months to repair it in time for its annual showcase to the world during the parade. It was unveiled in September, and Minerva and her pals look as good as new.

Below: The Herald building (with Minerva on top) and how it looks today, photo from the New York Times

2 replies on “A goddess in Herald Square gets a makeover”

nice piece, thank you…but two errors that you’ll want to correct to maintain credibility, which you no doubt value.
1) NY Times, among others, states that Minerva is NOT the goddess of poetry and music, but wisdom and warfare.
2) you misstate the name of the competitive newspaper as the New York Tribute…sorry no, it’s the New York Tribune.

Please fix, so I know you care,
thank you, Tom Orzo

Researching James Gordon Bennett, Jr. Would you know where I could get information re. a ring that could be connected to him. Gold, 5/8″ round disc with gold letters saying “La Nuit Porte Conseil” highlighted by black enamel. Inside and underside of disc has owl w/finely etched feathers, perched on branch, with waning crescent moon above its right wing, owl’s eyes are large, bright green enamel. Sky-black enamel, moon-white enamel. Have been told it’s turn-of-century, one-of-a-kind, made here in U.S. for wealthy man and probably worn as a “pinkie-ring”. No jewelers mark. So much like owl and wording on Bennett’s great seal for Herald. Thanks.