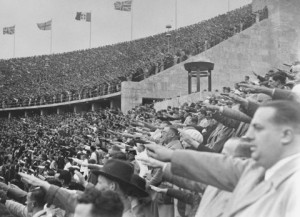 It’s been awhile since America faced the potential of an Olympic Games boycott. The debate about Beijing is still being waged in the press. America withdrew from the Moscow Olympics in 1980. And in 1936, there was an equally emphatic cry to boycott the Olympics in Berlin, Germany — and New York City led the protest. 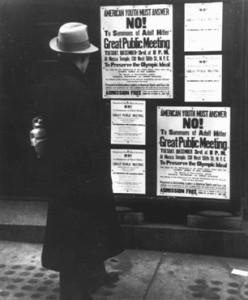 This seems logical, as New York was America’s center for Jewish culture; many Jewish athletes (most notably, world record hurdler Milton Green) would eventually sit out these Olympics anyway, in protest to Hitler’s purging of his Olympic team of Jewish athletes. Hitler had relented in his original dictate to ban all Jewish athletes from all countries, but who could blame any athlete from wishing to avoid such an event fraught with toxic politics?

But in fact it was prominent New York Catholic politicians that headed the effort to convince the New York Olympic committee to pull out of games. Leading the charge was former New York state supreme court justice Jeremiah Titus Mahoney, who also just happened to be the president of Amateur Athletic Union. Mahoney had run for mayor of New York in 1934 but lost to Fiorello LaGuardia.

So imagine the impact of a rally on Dec 3, 1935, where both Mahoney and Laguardia took to the stage, urging Americans to support a boycott of the Berlin Olympics. The rally was held at the former Mecca Temple for Shriners on W. 55th Street.(Today, its the New York City Center concert hall.) Pictured above: announcements of the Mecca rally

According to Jeremy Schaap, a host of political leaders urged on a boycott and read letters from supportive state governors and Senators. But it a speech from the diminutive but charismatic LaGuardia, himself of Jewish descent, that moved the crowd. “Athletic contests imply good sportsmanship and fair play, two qualities which are unknown to the Hitler regime.”

But boycotters faced two insurmountable roadblocks. The first was Avery Brundage, president of the United States Olympic Committee, who was firmly in Hitler’s pocket after a carefully orchestrated wine-and-dine tour through the country convinced him of above-board German intentions that would “promise … the greatest sports festival ever staged anywhere.” Brundage also happened to be the former president of the Amateur Athletic Union, pitting him directly with Mahoney.

The other was endemic of America itself. Many wondered how America could boycott the games out of political protest, when African-Americans were hardly being treated any better in our own country. Jesse Owens originally signed on to the notion of a boycott, but the general concensus was that a diverse American team could undermine Hitler’s racial policies by showing him up at his very doorstep.

So it was no surprise that at a Dec. 8 meeting of the Amateur Athletic Union, held at the Hotel Commodore on Lexington and 42nd Street, Brundage was able to convince the voting body of the organization to vote to stay in the games.

Despite the bad blood with city leaders, New York City hosted the Olympic trials the next year in July on Randalls Island at the former Downing Stadium. (Downing was ripped down in 2004 and replaced with Icahn Stadium.) New Yorkers got to witness firsthand the now-legendary prowess of Jesse Owens who then went on to snatch four gold metals from Hitler’s games. 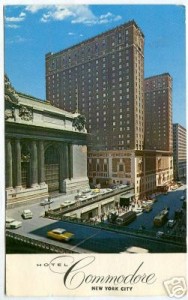 But while Owens was busy showing up the Nazis, a ‘protest’ Olympics were being held at Downing that same summer. The World Labor Athletic Carnival or ‘Counter-Olympics’ featured over 400 American athletes in a display more of solidarity than actual competition. Although it was organized by the Jewish Labor Committee, its no surprise to find as co-chairs of the ‘counter-Olympics’ the two former rivals who had desperately tried to boycott the games in the first place — Mahoney and LaGuardia.

As for the former Hotel Commodore (pictured at left), now the Grand Hyatt , it holds another place in sports history; it was here on June 6, 1946, that the precursor the the National Basketball Association was formed.