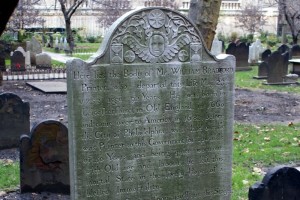 Dusting off the cobwebs of your high school history curriculum, you might remember the tale of John Peter Zenger, the publisher of the New York Weekly Journal whose libel trial in 1735 marked the beginning of the American discussion of freedom of the press. However, if you were to remember the Journal as New York’s very first newspaper, you would be close, but wrong.

The German-born Zenger came to America in 1710 when he was 13 years old and quickly became an apprentice in the shops of William Bradford, public printer of the New York colony and the city’s best known — and, oh yes, only — real printer at the time. (It was so easy to climb the corporate ladder back in those days.)

The Quaker Bradford was a mouthpiece for the crown but had exhibited a rambunctuous side when he first settled in the spanking new town of Philadelphia in 1682. He was scandalized by the spiritual wanderings of the Quakers farther north in New England and published the political treatise of critic George David effectively denouncing them. For that he was jailed and his printing press taken away.

As a New Yorker, he was far better behaved. At his new press near Fort William (that’s the former Fort Amsterdam and the current site of the Custom House), Bradford took Zenger on as a partner and on November 8, 1725, published Manhattan’s very first newspaper — the New York Gazette. 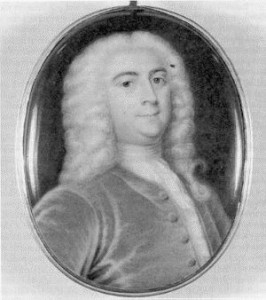 It was an unspectacular piece of journalism. Author Frank Luther Mott describes it as a “small two-page paper, poorly printed, and containing chiefly foreign news from three to six months old, state papers, lists of ships entered and cleared, and a few advertisements.”

Bradford would continue publishing the Gazette until 1744, never wavering from official crown duties. (The colony would see many newspapers named the New York Gazette over the proceeding years.) But Zenger would start his own press in 1726 and would spawn the Weekly Journal in 1733, which would go on to criticize the oppressive policies of governor William Cosby (pictured above), who Zenger documents as infringing on the “liberties and properties” of the New York colonists.

Meanwhile, Cosby had installed a censor at the Gazette and, apparently, commanded heroic sonnets be published about him, such as this one:

“Cosby the mild, the happy, good and great,
The strongest guard of our little state;
….
He unconcerned will let the wretches roar,
And govern just, as others did before.”

So naturally, that same year Cosby accused Zenger of libel in the very pages of the Gazette, an accusatioin that eventually led to Zenger’s landmark trial in 1735 and eventual acquital.

I am interested in the creation of the icon at the top of the page. It appears to be two Manhattens bearing a shield emblazoned with a windmill blade, a couple of barrels, maybe a beaver and a bird. Anybody have a clearer explanation?