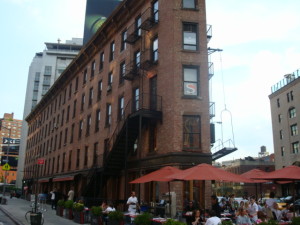 Some of the most interesting buildings in New Yorks are the triangular ones, those that sit at the intersection of diagonal streets that cut through the grid system. The Silas C. Herring Lock and Safe Company Building, more affectionately known as the L’il Flatiron Building or simply the Triangle Building, is probably the ‘cutest’ example of these, a five-story brick structure that notifies traffic to the change in neighborhood. Hudson spills down to the West Village to its east, while cobblestones grace its western front. But this girl’s led a hard life.

L’il Flatiron was built in 1849 as a four-story building for Herring’s well-known safe company. After Herring died in 1881, a fifth floor was added to the building two years later and converted into general shop space.

Today, its ground floor is presently occupied by pleasant Italian restaurant Vento, while the basement houses the lounge Level V. The crowds at these places are mainstream, young, professional. Are they aware that they dine and imbibe in what was once one of the most sexually active places in all of New York City? Literally thousands of people have had sex in the basement of the Little Flatiron. 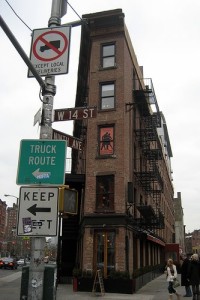 The Hellfire Club, the Manhole and Jay’s Hangout were also residences of the little Flatiron at some point during the 80s and 90s, catering to the various sexual proclivities of both straight and gay people.

And that was just the inside. Prostitutes openly trolled around outside during the 80s and early 90s, hobbling over the cobblestone, trying to make a living. Says one person who lived in the neighborhood in the early 90s: “The corner in front of that triangle building was tranny hooker & drug dealer central! Now it’s all Prada girls chatting away over triple low-carb lattes.”

Even its most prestigious filmic moment aches of high drama. Glenn Close’s psychotic character in ‘Fatal Attraction’ lived here, and the building was also used in the Oscar-nominated film ‘The Hours’. In fact a pivotal character leaped to his death from a window on its upper floors. As far as I know, no movie character has ever lived in this building and survived. (Sorry to spoil the movies.) 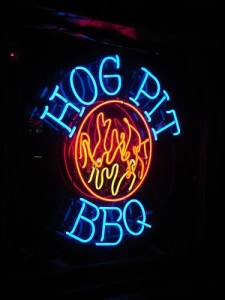 Today about the only hot spicy action one can find in the building is at the Hog Pit barbecue restaurant around the corner. This stomach-destroying barbecue establishment has been a mainstay of the neighborhood and has attracted its share of famous fans, such as Harrison Ford, Willie Nelson and Keanu Reeves . However, it, too, is being run out of the neighborhood by the end of the year. With a Ralph Lauren store slated to move in by 2009, the Little Flatiron will officially (and regrettably) become a respectable place.

However, they may want to reconsider moving in there. Perhaps the most starling and shocking fact of all — the building starred in a hit music video ‘2 Become 1’ by the Spice Girls. Oh, knowing that, how can I even look at it the same way? Lil Flatiron, hide your shame!

6 replies on “The sexy secret underneath ‘Little Flatiron’”

Wasn’t this also a a rent by the hour motel at some point in the 90’s or was that down the block?

Fatal Attraction wasn’t shot at that location. It was nearby, however at 675 Hudson Street.

I’m pretty sure the flatiron’s underground space was a det in “Single, White Female” in 1992.