I should preface this to say, out of fairness, I looked through the annals of New York City history for scandalously corrupt politicians named Barack Obama, Sarah Palin and Joseph Biden, but could find none.

John McKane was one of the most important figures in the history of Coney Island, in much the same way William ‘Boss’ Tweed shaped the fortunes of Manhattan. Both used greed and Tammany Hall connections to their advantage, manipulating the police force to do their bidding and cooking the books to pad the pockets of himself and his cronies. 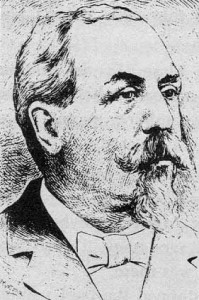 Coney Island was governed by the town of Gravesend, in the 1870s not yet a part of the growing city of Brooklyn. Dutch farmers mostly made up the town’s population until mid-century when new Irish immigrants settled here. McKane was born here in 1841 and would spend most of his life turning it and nearby Coney Island into a magnet resort area. (Unlike the later man with the same name, McKane lied to get out of military service, in this case, the Union Army.)

At first McKane was an honest politician, literally working his way from a Sunday school superintendent to town constable in 1867. From this vantage he could gauge the reactions of stubborn local farmers, who looked with disdain at the growing crowds from the city travelling to the new resorts sprouting up around the beach. Far from thinking the encroaching city folk a stain on their bucolic lands, McKane saw opportunities for expansion and profits.

Two years later, he was Gravesend’s commissioner, and with the help of town surveyor William Stillwell (whose family name still graces an avenue here) allowed developers to swarm into town and into the common lands near Coney Island — but not without jacking land prices, sometimes three times their normal value.

Obviously, prosperity in the 1860s and 70s came with strings attached — namely, abeyance to the powerful Democratic machine Tammany Hall. John McKane paid homage to the Democrats, then mastered their system of bribes and kickbacks from businessmen and land developers. At first, the local farmers and leaseholders were pleased with the results until it became obvious that McKane’s own pockets were swelling from kickbacks, granting him absolute power over every building project.

Below: McKane obviously encouraged railroads to terminate at Coney Island and sold off all the land around the Culver terminal

The final straw came when McKane engineered an absurd land grab for wealthy developer Austin Corbin, filling a council meeting with cronies and selling Corbin the area of Breezy Point (originally valued in some accounts at $100,000) for $1,500. McKane certainly received far more of that directly from Corbin for maneuvering such a deal.

McKane created his own the police force with himself as police chief, frequently seen on the beach, gigantic club in hand. Rigging elections, essentially becoming a mini-Tweed, McKane helped destroy the agricultural community of Gravesend and turned Coney Island into a garish tourist trap. He proffered licenses to anybody who wanted them — saloons, brothels, dance halls. Coney Island’s sometimes seedy reputation today was borne out of McKane’s blind eye. He even admitted “houses of prostitution are a necessity in Coney Island.”

By the end of his reign in the 1890s, Coney Island resembled this: 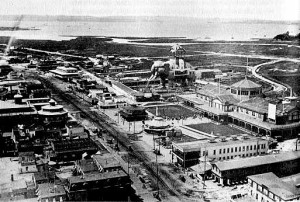 McKane somehow managed to avoid conviction throughout the 1880s despite several attempts by the New York state legislature. He was finally convicted in 1893 after refusing to turn clearly phony voting tallies over to the Brooklyn Supreme Court. He was thrown into prison for six years but was released in time to see Brooklyn incorporated into New York City — and Coney Island become the world’s leading center of amusement, spectacle and vice.

He died in 1899, notably less wealthy but still a Coney Island landowner on the cusp of its golden age.

Ooh I see an elephant! The last picture includes an elephant that looks suspiciously like “Lucy the Elephant” in Margate, New Jersey. I looked up the site for Lucy, and learned that she was not the only elephant building to grace the east coast, but that there were two more, including “Colossus”

Thank you for your article about John Y McKane. He is “our” most famous/infamous relative and I am always glad to see that he is still alive in history.