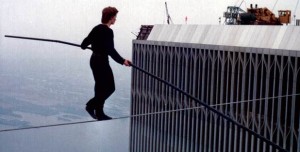 Some high-quality films and television shows returned to New York’s past for inspiration this year. Here’s a few of my favorites:

1 MAN ON WIRE
This documentary purports to be the story of Philippe Petit, the daredevil highwire artist who staged one of the craziest stunts in modern times, an illegal tightrope walk between the Twin Towers in 1974. But to me it’s as much a portrait of 70s New York as it is anything; look through the branches and see the grit and the glamour of downtown Manhattan. And of course the World Trade Center, retaining its wonder and majesty, back in the day when you could both hate it and love it.

2 DOUBT
A world ten years older than Petit’s is depicted in this John Patrick Shanley play turned self-directed flick. The scene, practically gothic, is the St. Anthony parish in the Bronx in 1964. This is the darkest portrait of the Bronx I’ve ever seen. Literally. The one time there’s sun, it’s used by viperous Sister Aloysius (Meryl Streep) as a light of interrogation upon Father Flynn (Phillip Seymour Hoffman), accused of a heinous crime with one of his young charges. Although the film (almost to its fault) stays claustrophobically indoors, snow-covered Italian and Irish working-class neighborhoods set the tone of a deceptively innocent world.

3 REVOLUTIONARY ROAD
Set almost ten years earlier than Doubt, this re-teaming of the Titanic stars Leonardo DiCaprio and Kate Winslet essentially depicts the clash of 50s suburban life with the toils of midtown Manhattan. The pair bicker throughout the entire film as a married couple thinking they can survive the banality of middle class life in Connecticut. To offset it, director Sam Mendes gracefully uses Grand Central Terminal as a metaphor for DiCaprio’s homogeny, its arching windows cast as prison bars.

Honorable Mention: Anyone looking to visit pre-developed 90s New York need only rent The Wackness, a loving portrait of the city and its music. The low-budget but heartfelt Henry May Long was only in theaters for a week, but its worth a look for its drawing-room portrait of two vastly different New Yorkers in the late 19th Century. (Should be on DVD next year.) Milk is set entirely in San Francisco but for the first ten minutes, with a passionate kiss in the subway between Harvey Milk (Sean Penn) and his soon-to-be boyfriend Scott (James Franco). A brief flash to the Stonewall riots remind you of New York’s links to the events of the film. 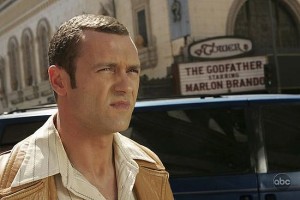 New York seems to be a backdrop on half the TV shows currently broadcast — even when it’s Toronto — but to take the risk and display New York’s past is pretty admirable when it’s done right. Until HBO answers my calls to make a weekly series about Five Points, these will have to tide you over:

1. LIFE ON MARS
Modern-day cop gets stuck in some kind of mental wormhole, jettisoning to a 1973 New York straight out of old, comfortable cop shows. Although I find it a bit costume-y, I love its attention to detail and zany cultural clashes. Its amber glow grants New York’s near bankrupt, joyously cultural era a buffer of sweet nostalgia. If the 70s were like this for real, who wouldn’t want to be knocked into a coma and join him? Here’s hoping the show makes it at least four years to the blackout, Son of Sam and Studio 54. (Hmm, maybe next season, he can go arrest Philippe Petit!)

2. MAD MEN
This show still isn’t filmed here, but the second season of Mad Man fine-tuned its depiction of early 60s New York in its perfectly dressed interiors and fashions. You never see Madison Avenue, but boy do you feel it on the smarm these ad men bring to their work. Don Draper disappears in Los Angeles for a few episodes, and you feel the loss of New York like a missing limb — or a weight off your shoulders, depending on the perspective.

3. JOHN ADAMS
Almost none of this epic mini-series was filmed here, or for that matter, even set here. But for the New York history geek in all of us, did you not get chills at the reenactment of Washington’s swearing-in at Federal Hall, with bug-eyed Paul Giamatti looking on as the testy, tormented vice president?

Honorable Mention: American Experience had two great New York stories this year — one on Grand Central Terminal, the other on Brooklyn’s favorite son Walt Whitman, a gorgeous, poetic episode that won an Emmy

Funny I couldn’t find anything in MadMen that resembles anything like post-war New York. Are these New York ad guys or Des moines insurance salesmen? Babylon never seemed more like Bakersfield.

I then they move the show from the suburbs to LA? Perfect fix. Wake me when its over.