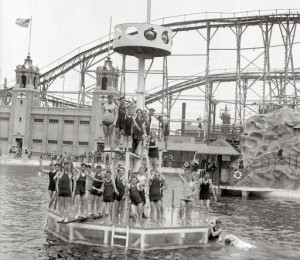 It’s raining men at Starlight Park in the Bronx, circa 1921 (photo cleaned up and courtesy of Shorpy)

For residents of the west Bronx, getting to Coney Island might have been quite a chore in 1918. So they decided to bring Coney Island to them.

I believe Starlight Park can be called the Bronx’s first amusement park. But it wasn’t the last. (More on that tomorrow.) Located on the Bronx River near the borough’s famous zoo, in the neighborhood of West Farms, it became a summer respite for residents looking for a cool swim or merely to ogle hot bodies in their revealing bathing suits (bare legs and arms!).

Similar to Flushing Meadows, Queens — which became a public park after its creation for the 1939 World’s Fair — Starlight Park also started off as a campus for a international exhibition, albeit far smaller. No one much talks about the Bronx International Exposition of Science, Arts and Industries, which opened here at 177th Street in the Bronx on June 30, 1918. The grounds, called Exposition Park, were not quite finished for the opening of the fair, which was held to “attract foreign trade to this country after the war.”

After the fair closed in November 1918, the park became the public playground Starlight Park. Just from reading about Starlight’s many amusements, it sounds like a hyper, dizzying place. Most prominent was an enormous swimming pool with faux rock features, a nearby roller coaster, your typical Coney Island-esque games and rides, boat rides, and outdoor performances by opera singers and greased up wrestlers (presumably, not all at once).

One of the park’s more popular attractions was something left over from the Expo: a small submarine called the Holland, the very first commissioned by the United States Navy. (The Holland is pictured below in its home in Philadelphia, just a couple years before being transported to the Bronx.) 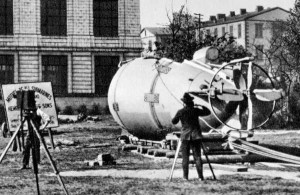 Later, the park’s centerpiece was a giant stadium, built in 1928, called the Coliseum which held up to 15,000 people. They were often there to cheer on New York’s premier soccer team, the New York Giants, who made Starlight their home from 1923 to 1930.

In these heady days before safety precautions, the Starlight was also the scene of a tragic roller coaster fatality. “Somebody in a skylarking mood stood up in a seat on a roller-coaster train … and fell out as the train struck a curve on the fifty-foot level,” reports the New York Times in May 1922. “The other passengers were thrown completely out of the two-train car.”

(My favorite line of the story: “Inquiry by the police at an address noted on a card in [the victim’s] pocket failed, however, to disclose any one who knew such a person.”)

By the 1930s, most of the rides had closed, but the pool was still a popular draw. The park became a magnet for the area’s working class families, who enjoyed sunbathing, picnicking and, if they stayed after dark, moonlight dancing to live big band music. One of the very first Bronx radio station WKBQ also made Starlight its broadcasting home in 1931.

Sadly, Starlight met with a rather ignoble fate. The park was slowly demolished over the year and by 1940 it was permanently closed, transformed into a city “truck facility.” A fire in the late 1940s destroyed any remaining vestages of the park, and its memory was completely wiped away by expanses of the Cross Bronx Expressway.

You can still go to a Starlight Park in the Bronx however. Or rather, you will be able to. The current Starlight Park, nearby the original location, is closed for renovations. Look here for more information on what’s going on there and when it’s opening. But for now, leave your bathing suits at home.

And click here to see the belle of Starlight Park.

5 replies on “‘Starlight’ express: fun and death in a lost Bronx park”

I totally DIG your podcast. Keep up the great work! If you guys ever want a free portrait session, next time I’m in NYC, you got it. It’s the least I can do for all the great shows. 🙂

Awesome. Love to hear about “lost” buildings, etc. Or old buildings and what they’ve become…

In my book “Lost Amusement Parks of New York City” I attempted to write the definitive history of Starlight Amusement Park. Some things have come to light since publication as well. So if anyone has any further questions after reading my account, feel free to ask. I may have the information you’re looking for.
Wes Gottlock

Its amazing, I’ve been living right across the street from this landmark and didn’t even know this existed here. As a child i remember starlight park and all it was a big baseball field we play ball. Im 47 now and walk by there every morning and about two months ago this subject came up again and this time i did some searching on Google and yes from my window i can see more or less the outline of where the park once was, now the bx zoo & mta station took up most of the property there but its still call starlight depot.. wow never knew i had a amusement park in my backyard…i guess for now I’ll keep enjoying the wonderful smell of the bx zoo when it rains, lol…

The site of The Coliseum eventually became a New York City Transit Authority bus garage by that name. The garage was been renamed The West Farms Depot (the story goes sonething like that).