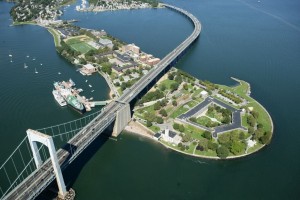 Some New York neighborhoods are simply named for their location on a map (East Village, Midtown). Others are given prefabricated designations (SoHo, DUMBO). But a few retain names that link them intimately with their pasts. Other entries in this series can be found here.

What is a Throgs Neck? And why isn’t it a Throggs Neck?

Of course that’s the name of a pleasant peninsular neighborhood in the Bronx. Many people with cars are probably as familiar with the Throgs Neck Bridge, a 1,800-foot Robert Moses/Othmar Ammann production which connects the Bronx to Queens. But where did that unusual name come from? Is a throg some kind of creature native to New England?

The “Neck” part is easy. The slender Throg’s Neck peninsula dangles where the East Rivers finally empties into the Long Island Sound. The neighborhood expands up the peninsula and out through the mainland.

For the throg, you’ll have to go back to the Dutch occupation of the region to find the answer. There was of course a contentious relationship between the Dutch and the British regarding territorial boundaries in the New World, a dispute that resulted in the eventual takeover of all Dutch lands in 1664. However, over 20 years earlier, the leader of the New Amsterdam colony, William Keift, seemed to take a more charitable view towards individual English families, especially those fleeing British rule due to religious intolerance.

The most famous of these satellite English settlements on alleged Dutch soil was that of Anne Hutchinson, a charismatic and determined leader who fled Massachusetts and Rhode Island out of religious persecution by the Puritans. Perhaps simmering with delight at Englishmen fleeing their own kind, Keift allowed Hutchinson and her flock to settle in the areas that are now called Pelham and Eastchester today. The Hutchinson River, which runs through these areas, reminds us of the impact of this ballsy lady.

Just a year earlier (1642) however, Keift allowed another persecuted religious leader to settle just downstream. The Rev. John Throggmorton (or Throgmorton or Throckmorton, take your pick, depending on which ancient document you prefer) and 35 others families were allowed to settle on this peninsula, valuable real estate if your living required contact with water, but dangerous because of the potential of being bottled in by an enemy.

The land had previously been known as Vredeland by the Dutch (or ‘land of peace’) owing to the lush natural beauty of the region. They dropped the old peaceful name and changed it to Throggmorton’s Neck.

Keift, who frequently provoked Indian anger, may have thought that additional European settlements could be used as a buffer against Lenape attacks to New Amsterdam, just 24 miles south. Eventually the Indians did attack; in one horrifying massacre on September 20, 1643, tribes exterminated the Hutchinson settlement, then traveled down to do the same to the Throggmortons. (Few in the future Bronx neighborhood escape the slaughter, including the borough’s namesake Jonas Bronck.)

Many families on Throggmorton’s Neck were brutally massacred, although a passing boat managed to rescue a few distraught family members. Strangely enough, Throggmorton himself was away that day. He never returned the area which would forever keep his name.

Within 150 years, the name would be shortened to Throgg’s Neck. Or, better yet, according to George Washington himself, “Frog’s Neck.”

You may have noticed that John’s last name has two g’s in it, while most common spellings have only one. Legend has it that this is another thing you can blame on Robert Moses. Not exactly known for reaching out to communities for their thoughts and opinions, Moses decided to drop a ‘g’ in 1955 when the bridge started construction, believing it would fit on more traffic signs without an additional and needless letter. Who cares if it was in use that way for over 300 years!

27 replies on “Name that Neighborhood: what exactly is a Throgs Neck?”

That’s definitely not the Throgs Neck Bridge in the picture above. It looks like the Whitestone.

The anchorage on the Whitestone is quite different. It is definitely the Throgsneck

It is the Throggs Neck
bridge. The NY Maritime Academy is in the photo.

As kids, we lived on Quincy Avenue in Throggs Neck, & thought it was the best neighborhood ever. We had the greatest neighbors & friends ever!! We were so happy to play & live there for several years & were sad when we moved from there.

You know, it was taken at such a weird angle, it’s hard to tell!

Regardless — I just replaced it with a far cooler picture from Corbis. The Throgs Neck from the first day it opened in January 1961.

Fascinating post! Thank you very much for this… We’ll be sharing with our readers in our Round Up today. I cannot think of one time that we’ve passed the bridge and had the discussion of the “G” vs. “GG” spellings.

I’ve heard that Robert Moses shortened the name from two gs to one to save on the cost of highway signs. If you walk around the neighborhood, the older stores stick with the two gs.

so interesting! do you have a post sbout the Whitestone Bridge?

Interesting article, as usual! However: “Keift” should be spelled “Kieft”.

Actually, the throg, now extinct, was one of the earliest birds to inhabit the cliffs on the northeast coasts of Manhattan Island–they lived off the schist and algae formed in the crannies of rock. The white and grey feathered bird had a long, curved neck and beak in aid of feeding itself and its young—hence the name of the bridge.

Mike (Metuchen, NJ) I was born in Throggs Neck and lived there from 1953-1961 on Clarence Ave. I have many fond memories of the area with many relatives in the area and free beaches 1 block away! We played on the Expressway construction site and enjoyed nearby Orchard Beach and Freedomland (now Co-op City), but never knew it’s interesting history until reading above.

The neighborhood expands up the peninsula and out through the mainland.

THE landscape in Throgs Neck, in the southeastern corner of the Bronx.
Assignment Kingdom

Wonderful post CZ GK
Best place to grow up in the whole USA! Lots of empty land for swimming,forts in the reeds,BIg free picnics and entertainment at the German Stadium soccer field.We watched them build that bridge.Same families live on for generations.
,

So why does no one mention the Maritime college as being part of the history of this area????

We moved from Chelsea project to Throggs Neck projects when it was completed in 1953. We lived at the NE corner at Sampson & Swinton Ave. Across the street were acres of phragmites, where we had many adventures. We walked to Calhoun’s Dive at the water. The bridge and exwy were built when I was in JHS.

what is Euthanasia? In the context of https://theessaypro.com/?s=euthanasia description, how would describe Euthanasia?

This was very informative. Got here from google because i always though it was Frogs Bridge til I saw it in writing tonight. Good job!

Thank you for the post. I am james and working for a medical company in the New York.

Thank you for sharing the amazing Blog.

I was born in the Bronx; there were 8 of us kids & 2 parents!! We lived on Quincy Avenue. It was a beautiful area & all of us kids got to hang out & have a wonderful childhood with our best neighborhood friends!! It was the greatest times of our lives. If only we could relive it! Hope the people living there now are enjoying the same wonderful times! 🥰🤗😘Wish you all the same joy we had living there!🙏🏻

The bridge is so beautiful it really look awesome. I Will be sharing with our readers in our Round Up today. Some New York neighborhoods are very much popular for their location on a map. We are med store where you can buy raloxifene in uk at cheap price.