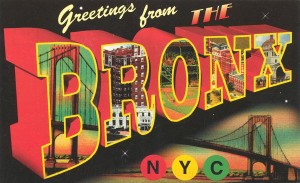 Some New York neighborhoods are simply named for their location on a map (East Village, Midtown). Others are given prefabricated designations (SoHo, Dumbo). But a few retain names that link them intimately with their pasts. Other entries in this series can be found here.

The Bronx is one of two boroughs with names derived from actual people. The residents of Queens can brag that their borough honors Charles II’s wife Catherine of Braganza. The Bronx, however, gets its name from less regal sources, from Swedish-born landowner Jonas Bronck. However the Bronx is not directly named after Bronck. Confused?

Despite Bronck’s tenacity in forging onto the unknown Lenape Indian territory of Rananchqua in the Dutch colony New Netherlands, his actual role in New York history is quite brief. An ardent intellectual who gave his ship the lofty name Brand van Trogen (The Fire of Troy), Bronck, his wife Teuntje and a boatload of eager voyagers traveled to the new world in 1639 and settled on a stretch of land, 500 acres, across the river from the village of Haarlem.

With permission from the West India company, Bronck had brought builders, his own cattle, boxes of books, and a desire to create a small community of his own. Spread out through the modern neighborhood of Motts Haven, Bronck’s farm (Broncksland) and those of the other settlers sat along a north-south river, called by the Lenape the river Aquahung.

Bronck grew tobacco and traded with the local Indians, keeping the peace through exchanges of goods. Jonas however had arrived at a rather unfortunate time to be a pale blond foreigner. 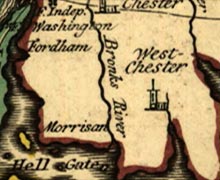 Relations between the Dutch and the native Indian population were tenuous at best, and not greatly assisted by hot-headed director-general William Kieft of the port city of New Amsterdam. In 1643, driven by growing animosities and the murder of a single settler, Kieft ordered troops to rout the Lenape populations at Corsairs Hook and the area now known as Jersey City, murdering dozens of Indians and ensuring years of bloody battles between settlers and natives.

Bronck was the unfortunate recipient of native Indian backlash. That same year, 1643, Bronck and most of his settlers were murdered in an Indian raid.

Kieft would be swept out of the new world by Peter Stuyvesant. Bronckland would pass into other hands, and after just a few years, the parcel of land would no longer be named for him. Jonas was almost erased from history.

Except for that rather sizable river that ran through his property, the Aquahung. Even as memories of Dutch settlers gave way to their British successors — his farm went to two officers in Oliver Cromwell’s army! — the river was still referred to as Bronck’s River. Eventually it was shortened to the Bronx River, and thus it’s the river that the borough is named after.

Had everybody just kept with the original name as given by the Lenape, we would be referring to our northernmost borough as Aquahung.

By the way, Bronck’s wife and son escaped the Indian raid, and later, Teuntje with her new husband moved to the area now known as Coxsackie, New York. Son Pieter Bronck became a landowner in his own right and built a house that still stands today. It is the oldest home in all of upstate New York.

6 replies on “Name That Neighborhood: Who is Jonas Bronck?”

Sorry guys, nothing to support the notion that Bronck was killed.

Peter Bronck is a family member, but not a son to Jonas Bronck. Probably a brother (although there’s a 16 year age difference)or cousin. He had the same patronym “Jonasson” but it’s very unlikely that he’d be a son. So, no direct descendents from Jonas Bronck.

You are right ! Jonas Bronck had no children. I am also related to
the Bronck family. My grandmother was Lily Bronck Greene who
was born in Coxsackie, NY as was my mother, Marion Greene
Brown. We are descended from Pieter! He too had a Dutch wife.
Jonas’ father was a minister in Sweden and Pieter was believed to
be Jonas’ brother. I visited the family homestead when I was
a young girl. When the home became a museum they asked family
members if they had family items to contribute. I do have a dresser. Most of the family moved to Hudson, NY in later
years. My mother’s brother lived in a home that his grandparents had lived in at one time.
Such fun to learn of our ancestors !

How can I reach you, Marjorie? I’m at BGAndersson@aol.com.

The is NO indication that Bronck was killed; his estate was intact and documents indicate this. That would not have been the case had he been murdered. Further, Pieter Bronck was not Jonas’s son but most probably a nephew or cousin. Again, documents support this. Bronck did not own or name the ship on which he travelled to Niew Amsterdam. He did, however, name his property. He named it “Emmaus” after the biblical passage where travellers first encountered the Risen Christ. His library, again intact after his death, had many religious tracts.

I’m so happy to learn that Swedes established the Bronx since I am 50% Swedish. Very interesting story.

I grew up in the Bronx and it is a wonderful place.
I attended school there.
VILLA MARIA Academy is my high school.
Susan P. Egan