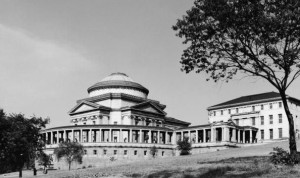 Most small community colleges feature a statue or two honoring somebody specifically related to the campus. Even massive schools could invite their monuments over for a small dinner and have room for you and your friend from out of town.

Bronx Community College would need a fairly large banquet hall. This school in University Heights, the Bronx, is a kooky mix of classical Stanford White-designed buildings (from the days when New York University camped here) to some rather awkward concrete classrooms typical of schools that flourished in the 1970s.

One of the stranger acquisitions BCC received when it took over the NYU campus in 1973 was a prestigious hall of fame featuring the biggest names in American history. Let me clarify. They don’t own a hall of fame. They have THE Hall of Fame. 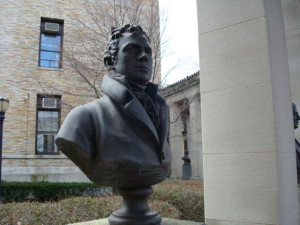 Tucked on a scenic cliff overlooking the Harlem River (and with the Cloisters well in sight), the Hall of Fame for Great Americans was an ambitious project constructed in 1900 with the idea of immortalizing the Americans with significant contributions to science, the arts, politics and the military. Spearheaded by then-chancellor Henry Mitchell MacCracken, the project is the first real memorial ‘hall of fame’ concept to be executed in the United States.

The spacious colonnade tucked behind the White-designed Hall of Philosophy, you are thrown back into a mix of turn-of-the century scholarly aesthetic and the belief of equating the American movement with ancient Roman and Greek forefathers. 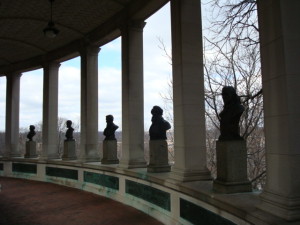 With room for 102 sizable busts (although there are only 98), the colonnade winds around the contours of the hill, spotlighting American icons. John Marshall sits astride Henry Clay. Harriet Beecher Stowe is a few busts down from brother Henry. George Washington AND George Washington Carver are close enough, they could play catch (if they had arms). 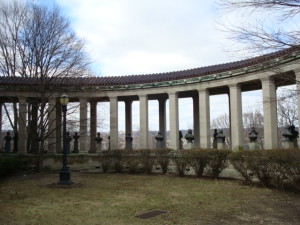 The Hall of Fame is a true curiosity in the ‘roadside attraction’ sense. Once a fabled hall with prestige enough that newspapers would lobby for nominees, there haven’t been any new inclusions since the 1960s. (Three more ‘American icons’ — Clara Barton, Andrew Carnegie and Luther Burbank — were elected in 1976, but nobody ever made busts for them!) Once NYU sold the campus, the colonnade was neglected, the hall of fame virtually forgotten.

It has been recently renovated, and the BCC keeps this well-preserved secret maintained. I went this weekend, stayed for about an hour, and didn’t see a soul. It’s worth a visit for the view, although you might want to wait until spring to appreciate the foliage.

— One bust sits apart from the others, partially because he’s the only non-American — the Marquis de Lafayette

— Actor Edwin Booth sits serenely looking out at the river, while the man his younger brother assassinated, Abraham Lincoln, has a less interesting view

How to get there: #4 train to Burnside Avenue. Walk west to University Avenue and one block north to the college.

Aw, after that comment, now I want to see the Maria Mitchell bust!! You didn’t take a picture? 🙂

Expanding upon your clarification about them having THE Hall of Fame, just wanted to add: This is the very “Hall of Fame” sang about in “The Wizard of Oz” when the Munchkin Mayor tells Dorothy that she’ll “be a bust (be a bust, be a bust) in The Hall of Fame.”