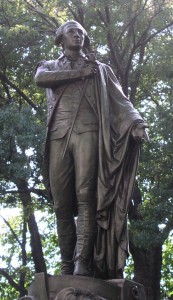 The Marquis de Lafayette might be a minor figure of the American Revolution for some people, but the French man takes center stage at the New York Historical Society with “French Founding Father: Lafayette’s Return to Washington’s America.” (Pictured: the Marquis in Union Square)

The show opened this Saturday with a host of costumed actors milling about brightly refurbished exhibit rooms stretching from the third floor to the basement.

Lafayette — or, as I like to call him, Marie Joseph Paul Yves Roch Gilbert Du Montier Lafayette — was George Washington’s right-hand man for much of the war and a potent symbol of America’s dependence on the French to achieve victory.

“French Founding Father” is not a New York-centric show for the Historical Society; as the title implies, the meat of the exhibit concerns itself with Lafayette’s historic tour in 1824 of the new United States five decades after assisting in its freedom from the British. 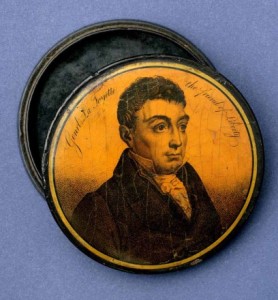 His appearance reactivated a new round of American patriotism, as each state (24 at the time) vied for his attention with lavish galas and processions. The show’s cheekiest part involves an entire room devoted to Lafayette souvenirs and paraphernalia. One hasn’t lived until sampling hot soup from a commemorative tureen depicting Lafayette at Washington’s Mount Vernon grave site. (At right: why keep your snuff in anything but an official Marquis de Lafayette snuff box?)

And lest you think the Historical Society is making a big deal out of his American appearance, they list a lengthy list of cities, counties and monuments named after the Marquis to show their support for the French hero.

New York wasn’t to be outdone. During his trip, he visited a number of locations downtown, culminating in an extravagant ball at Castle Garden (that’s Castle Clinton in Battery Park to you and me). In the years after the visit, Lafayette would be immortalized all over the city:

— A statue of the Marquis stands on the east side of Union Square, crafted no less by Frederic-Auguste Bartholdi and dedicated in 1876. Ten years later, Bartholdi would offer New York an even bigger gift from the French — the Statue of Liberty.

— Joseph Pulitzer liked Bartholdi’s works so much that he commissioned him to create another Lafayette monument, “Lafayette and Washington,” now the centerpiece of Lafayette Park in Morningside Heights at 114th Street.

— American sculptor Daniel Chester French gives us the Lafayette tribute at Prospect Park West (see below), showing the Marquis standing next to his trustworthy steed. The piece was unveiled in the park by the French War Commission in 1917, surely a potent gesture in the midst of World War I. French, by the way, is better known for the ornate Four Continents monuments in front of the Alexander Hamilton Custom House, as well as for ole Abe at the Lincoln Memorial in D.C. 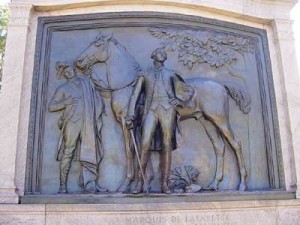 “French Founding Father: Lafayette’s Return to Washington’s America” runs through August 2008 at the New York Historical Society. For more info on Lafayette, somebody has set up a loving fan page.