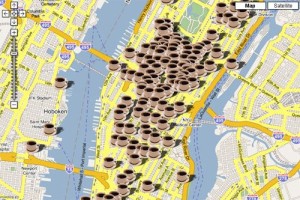 Gothamist ran this disturbing list of Starbucks locations in 2006.

The history of the New York coffee house has taken a catastrophic twist in the 21st century.

Before I go further — this is not a defacto attack on Starbucks. Yes, Starbucks is over-priced, often high-calorie burnt tasting swill. However it has a fairly good track record as a company for basic employee benefits, and they often do make attempts, however small, to assimilate into communities. I’ll leave the for-and-against debate percolation for books, political tirades and Williamsburg loft parties.

At last count there were 171 Starbucks in Manhattan. (Here’s a look at a few dozen of them.) Im sure since beginning this post, another store has opened. And I’m not even sure those numbers tally the various Starbucks tucked within other places, like Barnes and Nobles. And you can double that number of you if add up all the competing non-local chain coffee shops.

This certainly leads to the question — where did Manhattan first get hit with the Starbucks infection? I found the answer surprising — 2379 Broadway, at 87th and Broadway. The Seattle-based company took its time getting to Manhattan; opening in April 1994, this Upper West Side location was the 318th franchised store and, at the time, the largest Starbucks in the world.

That marks it as historically significant (no, really) although no Starbucks will ever achieve the fame of one of New York’s first and most important coffee houses, the Tontine. The hangout for the Revolutionary set, the Tontine, located at Wall and Water streets, was located in the heart of the federal government. Members of the new Congress and the president’s cabinet frequented the locale, most especially Alexander Hamilton. Although quite a different concept then our coffee houses today — they were more akin to boardinghouses — they still served as public meeting places with conversation and debate more important than the imported coffee.

In fact, the New York Stock Exchange was born at the Tontine, bankers and merchants who had signed the Buttonwood Agreement (creating the collective of traders under the name ‘New York Stock & Exchange Board’) gathering there at noon each day, until 1827 when the organization moved into a more offical Merchant Exchange.

Below, the Tontine in 1797, in a work by John Joseph Holland: 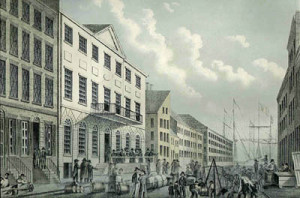 Over 160 years later, with coffee houses now most concentrated in Greenwich Village, the political and sometimes radical unrest of the 1960s would find receptive audiences there. And while its amusing to think back to the cliches of that scene (the beatnik, the poetry, all those bongos!), it’s at coffee houses like Cafe Wha? that musicians like Bob Dylan got their start. It should be noted, I guess, that 60s coffee houses were essentially just bars without (and often, unable to get) liquor licenses. 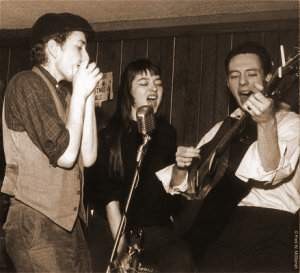 By the way, the Starbucks at 87th street will no longer be making history as it closed in 2003, to make way for the only thing in Manhattan more prevalant and harder to stop than a coffee or fast food franchise; it’s now home to a bank branch (North Folk Bank).