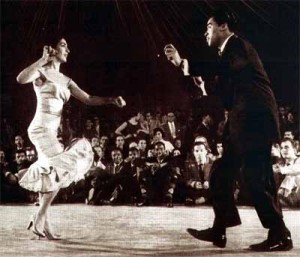 ABOVE: Millie Donay and Cuban Pete, the queen and king of Latin dance, cuttin’ it up at the Palladium

It’s become almost cliche for me to bring up a New York nightclub with the credentials of popularizing a world renown dance style. The Peppermint Lounge has the twist, the Roxy breakdancing. But those moves are with us only as retro vestiges. The mambo, on the other hand, is still a popular ballroom dance, and it’s around thanks to the lithe and lovely hoofers that frequented the Palladium Ballroom.

This is not the former Palladium nightclub on 14th and 3rd Avenue, a concert venue turned Peter Gatien-owned nightclub from the 90s (which, incidentally, in now a New York University dormitory!) Nothing is left of this Palladium, a former second floor ballroom on the corner of 53rd and Broadway, near the Ed Sullivan Theatre. Nothing, that is, except for an international dance craze.

The Palladium opened in 1947 just as the bittersweet residuals of a finished war were hitting the country. New York’s Latin population boomed after the war, facilitating the need for larger entertainment venues outside of traditional Latin neighborhoods. This massive influx of people from Cuba, the Caribbean, Puerto Rico, Mexico and other South American countries inlaid bursts of different cultures into traditionally white — and whitebread– notions of nightlife. The Palladium would not follow in the relatively sedate footsteps of New York’s burgeoning 40s dance scene.

The epicenter of Afro-Cuban music would begin with a Jewish tailor Maxwell Hyman, owner of the Palladium, who introduced Latin music to his ballroom on a Sunday night, where it instantly caught fire. Hyman quickly filled every night with Hispanic and Caribbean entertainers and dancers, scouted from smaller venues and snatched up to fill the Palladium schedule.

As the club grew in popularity, it became the natural nesting ground for a new music craze jelling Cuban rhythms with African folk beats — the mambo.

While composer brothers Oresto and Cachao LÃ³pez are considered the inventors of the style in the 30s, it was the Cuban-born Perez Prado who coined the phrase for American audiences. His RCA recordings brought the sounds to national prominence, particularly through his hit ‘Mambo No. 5’. (Yes, that Mambo No. 5.)

It hardened into a sexy and athletic — but somehow accessible — dance at the Palladium. Those perfecting it at the ballroom fused the skills of ballet dancers and acrobats into acts of statuesque sweep and grace. Augie & Margo Rodriguez (seen below) were frequent performers here, dipping some flamenco into their mambo, and later touring the world to perform with Harry Belafonte and Sammy Davis Jr.

Then there was Millie Donay and Pete Aguilar. To the sounds of ‘house band’ Los Ases del Ritmo, Millie and Pete would pack in capacity crowds on Wednesday night, hypnotizing them with Aguilar’s mambo swagger and Donay’s gyrating chachacha’s. Aguilar would become so famous that Desi Arnez would write a song for him — “Cuban Pete.” The name would stick with him forever. Cuban Pete is now considered the father of mambo, and at 80 years old still trains dancers today. (Donay died in July of this year.)

At the Palladium the orchestras and music performers would threaten to overshadow the dancers. Popular artist Arsenio RodrÃ­guez and his band would help define the mambo sound further with the introduction of conga beats and brass instruments into the mix. The ballroom platform saw the likes of Celia Cruz, Beny MorÃ©, La Lupe, Tito Rodriguez, Machito and Tito Puente (pictured below). 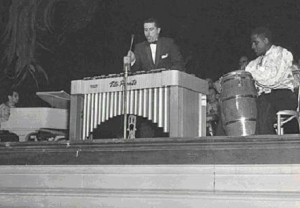 In fact, the ‘two Titos’ were to have a vicious onstage Palladium rivalry — playing out in musical barbs aimed at each other, such as “Que Pena Me Da (I Pity You)” — that must have delighted crowds almost as much as the two disliked each other. Despite this, they and Machito were often referred to as ‘the Big Three’ and would tour with each other, obviously swallowing their contempt. They seem to be getting along in the picture below: 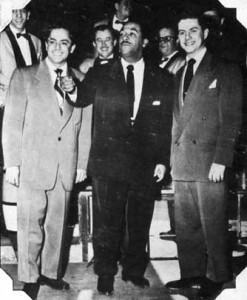 And, yes, like any New York sensation, the celebrities would soon come to fill the floors too; frequenters included Marlon Brando, Lena Horne, Henry Fonda and Bob Hope (!).

The popularity of the mambo and the cha-cha would spread other clubs, particularly to the influential La Bamba nightclub just around the corner, and to the Tropicana in the Bronx.

Although the Palladium closed in 1966, the results of years of amazing dancing there can probably best be seen on Dancing With the Stars. Methinks Millie and Pete would have swept the floor with those clowns.

And finally, this glorious picture from the final days of the Palladium — 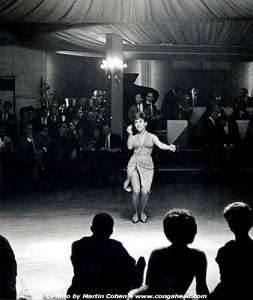 The Palladium was the best Dance Place to go & dance. It was the
1st studio #54, Studio #54 was all drugs & stars. The Palladium was all “Class”. I miss it a lot, wish there were places like the Palladium Ball Room on 53rd and Broadway today.( Wishful thinking.)