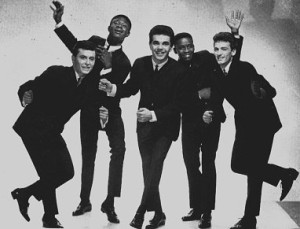 pictured: Joey Dee and the Starliters, who turned a small midtown gay hustler bar into a dance hit in 1961

Like most things associated with popular music, the early 60s brought sea change to the very notion of nightlife. Clubs typified by the 21 Club and last weeks’ feature El Morocco were very much venues where you dressed up, not where you let your hair down. Harlem and Greenwich Village certainly catered to rowdier fare, but in midtown, things still held a pretense of glamour and society.

All that changed as rock and roll seeped into the streets. Such “naughty” music, inspiring amoral and sexual dancing, sprang first from the seediest places, with the sweetest being the Peppermint Lounge, also known as the home of the Twist. Although the Twist was actually born in Philadelphia, New York and the Peppermint sped it up and whipped it into a frenzy.

The ‘Pep’, as it was called, a hole in the wall at 128 West 45th Street, with a doorway into the adjacent Knickerbocker Hotel, might have remained a quiet gay hustler bar out of the way of the public consciousness had rock and roll not swept through. Vanity Fair calls it an “inauspicious dump destined to become a pop landmark.” The ruffians would soon share the floor with Marilyn Monroe and the Beatles. 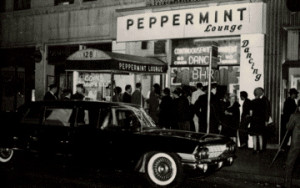 With a capacity of 174 people (and often filled to just slightly over that amount), a tiny stage and even tinier dance floor, the Pep soon pulsed with dance-friendly rock music, featuring house band Jordan Christopher and the Wild Ones slinging R&B rhythms over guitars and marrying it with almost demonic body gyrations. The well kept secret was effectively spilled when frequent performer Joey Dee and the Starliters recorded their biggest hit ‘Peppermint Twist’, cementing the club’s lusty reputation into a hit record in 1961. (Watch a video here of the Starliters performing their hit.)

The Pep was sweaty raunch. It was white society dabbling into the rhythms of black music. Traditional society, leering over the edge of its dry martinis, thumbed up its nose. But like everything forbidden in this city, the Peppermint soon drew its admirers.

Or as Tom Wolfe explains it: “One week in October, 1961, a few socialites, riding hard under the crop of a couple of New York columnists, discovered the Peppermint Lounge and by next week all of Jet Set New York was discovering the Twist.” 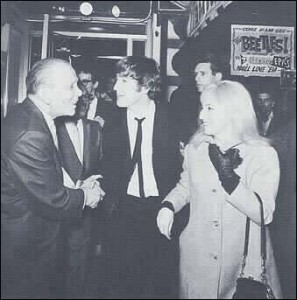 The mystique of the Twist — and the dozens of other novelty dances that came afterwards — is that is was a solo dance. And as a result, according to the New York Social Diary, “It was the first time the general public saw men dancing with men and women dancing with women.” The Pep invited sexual intimacy and freedom. Perhaps not of the types we see on dancefloors today, but this was the first significant steps towards it.

But while the floor of the Pep might have been filled with twisting, sexed up young adults, the allure soon drew icons. Marilyn Monroe, seen last week shimmying at El Morocco, found her way to the Peppermint, as did the Beatles during their legendary week in the city. (Pictured above: John Lennon is welcomed into the Pep.) As well as an odd assortment of celebs that I can’t imagine ever once did the Twist — Liberace, Tennessee Williams, Noel Coward, Norman Mailer, Judy Garland, Zsa Zsa Gabor, John Wayne (!).

According to Time Magazine (via the above Vanity Fair article), “Even Greta Garbo hauled herself out of her myth-lined cocoon and appeared, lank-haired and bone-pale, to snap her fingers and smile.” Even first lady Jackie Kennedy snuck in with her sister Lee. 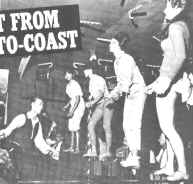 The Pep made stars as well. Three of the Starlighters spun off into another band, the Rascals. And Phil Spector’s pet project the Ronettes, according to legend, got their unexpected big break there: “One night in 1961, the girls dressed in tight skirts and with their hair piled high, stood [outside] in line …. the manager mistook them for a singing trio that hadn’t arrived and took them inside. Ushered them on stage and they belted out a version of Ray Charles’ “What I Say,” … The girls took the club by storm and were signed to appear regularly for $10 a night.” (At right: Ronettes at the Pep)

The Pep wouldn’t survive the 70s. The space on 45th street would become a couple different disco venues: a circus themed disco called GG’s Barnum Room (pictured below) and a glossier disco called Hollywood. The Pep would return in fits and starts in other locations, but nothing approaching the feral frenzy of its early days. 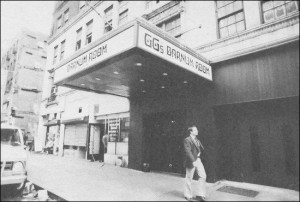 The address of the Peppermint, 128 West 45th Street, is completely gone, replaced with a parking garage, a Citibank and a luxury hotel. However, not more than a 100 feet from its original location was once another legendary rock venue, Bond International Casino.

Great blog on “The Pep”. I never knew all the details, so it was a lot fun to read about on the the celebs that frequented the joint.

Any interest history on the upcoming Halloween Parade?

Keep up the good work.

Want to plan an all day friday and Saturday in the Village with my wife and two friends. Need some suggestion for a walking tour, off beat historical site (please include bars) and a not so well known great restaurant. We are prteyy familar with the village, but looking for some new fun stuff.
thanks in advance ….Rickyd

hey, do you guys do walking tours?

I was there one night in 1961. I was with a group of guys and we were in the US Navy at the time and in uniform — we never got past the bouncer at the front door although,from the street, we could hear the Isley Brothers on stage singing their hit song ‘Shout’.

My Cousin Roi and I took a greyhound bus to New York from Detroit in 1961. I was 20 and he was 19. We were at the Peppermint Lounge 6 straight nights. I even danced with one of the Bandmembers girlfriend, who asked us to join them for breakfast after the close at 4:00 in the morning. I saw Joey Dee later in the 1990’s in Vegas when I lived there. He and the band autographed one of their 1st albums for me.

Anyone know who the man greeting the beetles in this photo is? https://boweryboyshistory.com/wp-content/uploads/2007/10/beatle.jpg

He’s in just about every photograph greeting various celebrities as they enter the Peppermint Lounge, yet you can’t find any information about who he is. A mafia figure of some kind?

I know who he is. My grandfather. Lou ” Lombardo ” Laudiero.

Did anyone know any of the dancers? I think my grandmother worked there.

Ronnie Spector started as a dancer and my grandfather hired her and her group later known as The Ronettes for their 1st gigs. What was your grandmother’s name? I’m friends with David Brigati one of the original Starliters and then Rascals fame. He may have known her.