We’re going to the ‘original’ Waldorf-Astoria Hotel in this podcast to hang with the filthy rich. Our guides are the styling and eccentric Astor family, the centerpiece of 19th Century New York wealth and society. Come along as we weave through a family tree of Williams and John Jacobs, not to mention THE Mrs. Astor, the one and only (even if there was more than one).

A glimpse inside the Waldorf-Astoria ballroom : a Phi Gamma Delta fraternal function in 1908 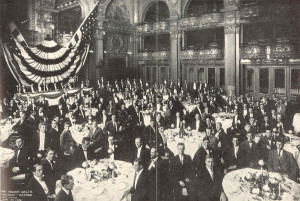 Outside the combined hotels, you can see where the shorter Waldorf ends and the taller Astoria floors begin. The streets look pretty calm too. 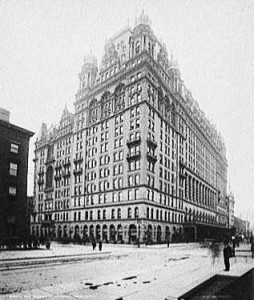 John Jacob Astor IV — inventor, writer, gad-about — at 48 years old, the year he meets his fate on the Titanic 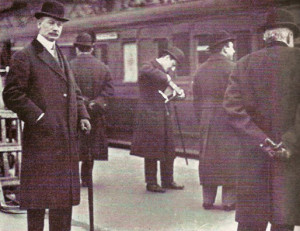 Another Astor holding, the Astor Hotel, was built by William Waldorf Astor in Times Square. This postcard curiously gives us an inside look. 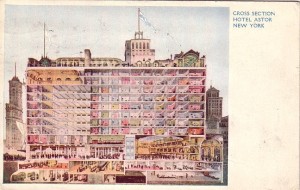 This is not to be confused with the Astor House, the downtown Manattan lodging built in 1836 by William and JJ Astor IV’s great-grandfather, the original John Jacob Astor. Right next door to the long-standing St Paul’s Church, the location of the Astor House is now occupied by a Staples and a New York Sports Club. 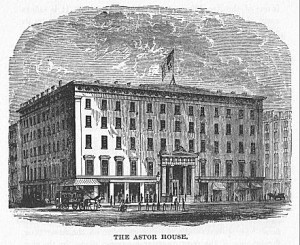 And over in England you can now visit the Hever Castle, once home to Anne Boleyn, but refurbished and lorded over by William Waldorf Astor, shedding his American skin to become an eccentric British viscount. 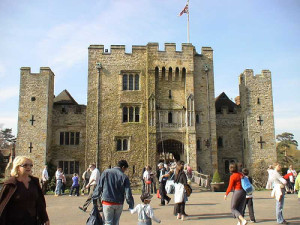 And we failed to mention that the Waldorf salad gets its name from the hotel where it was purportedly invented by Waldorf-Astoria’s much-admired maÃ®tre d’hÃ´tel Oscar Tschirky, who incidentally also claimed the invention of eggs benedict and veal oscar. As we mentioned on our podcast, thousand island dressing also made its debut at the Waldorf. 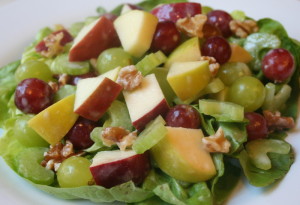 If you’re interested in more, you should read Justin Kaplan’s When The Astors Ruled New York . We’ve previously written about the profundity of Astor-named places here.

4 replies on “PODCAST: The Astors and the Waldorf-Astoria”

I loved this podcast, I laughed so much in the beginning. I had to stop and get a pencil and paper and start again to keep up with who begat who. It was great and very interesting.
Bremda Krivanek

This was a very funny and interesting podcast! I am a history student and always interested in these kinds of stories. I am currently visiting New York and planning to visit the ‘new’ Waldorf-Astoria, just because….

This was a brilliant podcast… one of my favourites – so far. Who knew that there is so much history on the block of land of the ESB. Very confusing with the names.. haha