City Hall, year 1900: Looks slightly different, doesn’t it? The tower was rebuilt after a fire in 1917, and the entire exterior was redone in Alabama limestone in the 1950s

New York City Hall sits majestically inside a nostalgic, well-manicured park, topped with a beautiful old fountain straight out of gaslight-era New York. But its serenity belies the frantic pace of government inside City Hall walls, and disguises a tumultuous, vibrant history. There have actually been two other city halls — one an actual tavern, the other a temporary seat of national government — and the one we’re familiar with today is a little less than 200 years old.

Join us as we explore the unusual history of this building, through ill-executed fireworks, disgruntled architects, and its near-destruction — to be saved only by a man named Grosvenor Atterbury.

PLUS: We look at the park area itself, a common land that once catered to livestock, British soldiers, almshouses and a big, garish post office. 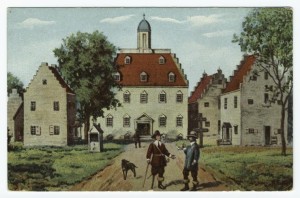 ___________________________________
Federal Style: The second city hall, made from stones from the actual ‘wall’ of Wall Street, would be a bustling overstuff building and central to the beginnings of American history. For a couple years, as Federal Hall, it was the center of federal government; the votes for George Washington as the first president were counted here, and he was sworn in from the balcony. (Pic courtesy NYPL) 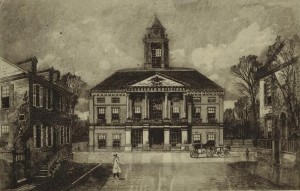 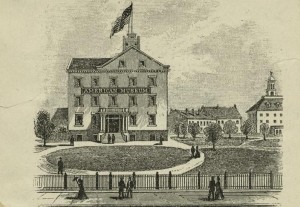 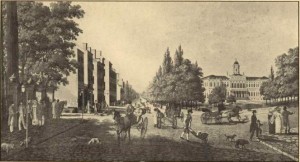 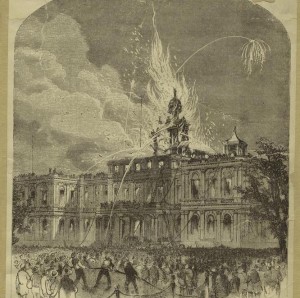 ___________________________________
The City Grows Up: New York’s growth spurt starts around City Hall Park, with a few new skyscrapers becoming the tallest buildings of their times, including the World Building (pictured at center), the Park Row and St. Paul buildings (just south), and the Woolworth Building, on the park’s west side. 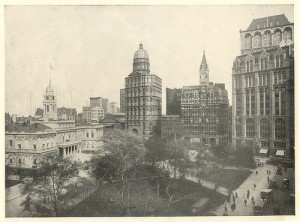 The Municipal Building joins it a few years later…. 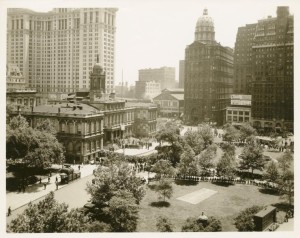 Post Haste: The City Hall Post Office sat on the southern end of City Hall Park. In the picture below (not sure of date, but obviously early 1920s at earliest) it sits directly across from the Woolworth Building. The post office was demolished in 1939. 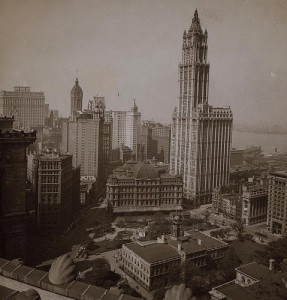 The front of the Post Office, entirely consuming the area that is today’s southern end of the park and adjoining traffic triangle. 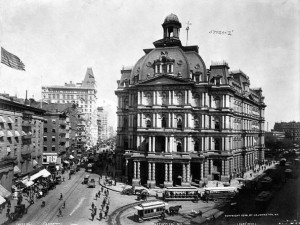 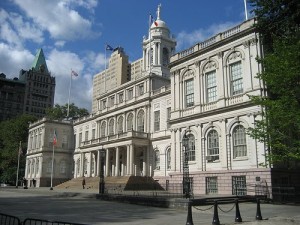 During this podcast (episode 93), you mention (towards the end) that there was a shooting at City Hall on Jul 23,2003 where one Councilman shot another to death on the steps of City Hall. I would like to make 2 corrections to that. The assailant wasn’t a NYC Councilman, though he was a political rival to Councilman James Davis. Also, the shooting took place in the gallery of the Council Chambers. The Assailant was then gunned down by an NYPD officer on duty in the Council Chambers.

I enjoy the podcasts and they have greatly expanded my knowledge of NYC History. Keep up the great work.