Federal Hall National Memorial, currently administered by the National Park Service, has always been a popular landmark with tourists thanks to its position on one of the most photographed intersections in New York. Who can resist that noble statue of George Washington silently meditating on the financial juggernaut of Wall Street?

It joins an impressive hodgepodge of local landmarks such as South Street Seaport, the Lower East Side Tenement Museum and the Whitney Studio.

While this sounds like a distinction that might pique the interest of Nicolas Cage — after all, he broke into Trinity Church up the street in the first National Treasure film — the National Treasure program gives a boost to historic places that may be otherwise neglected or under-appreciated. When’s the last time you were there?

Here are a few facts about the history of Federal Hall that you may not have known:

1. This isn’t the real Federal Hall The original structure was built in 1699, built by the British who used materials from the city’s demolished north defense wall — aka the wall of Wall Street — to construct it. It was the center of most governmental functions, from city administration to later federal functions. 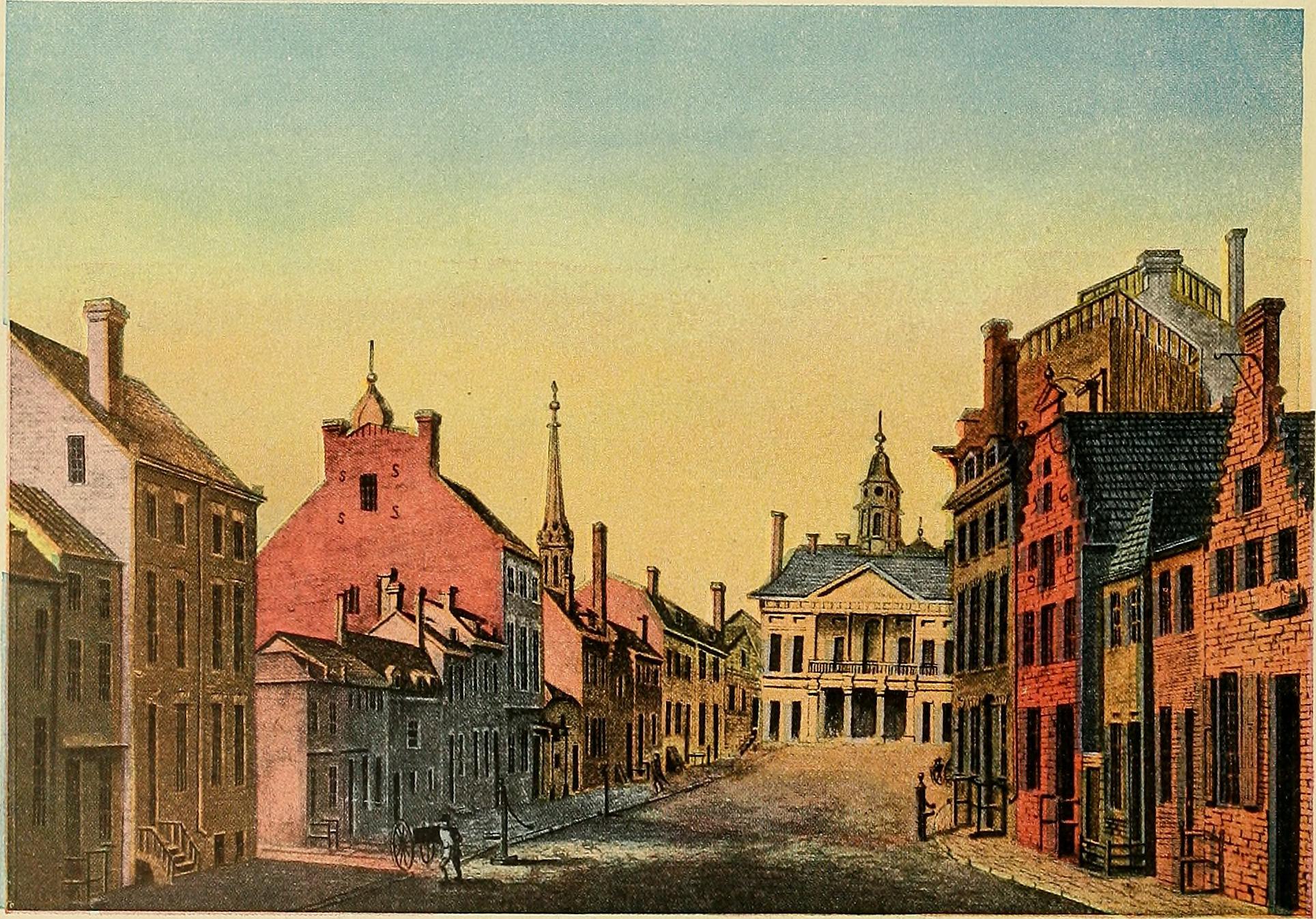 2. It was remodeled by a controversial architect. Pierre Charles L’Enfant, a successful city contractor and former Continental Army engineer redesigned the structure in time for its use as the first national capital. According to David McCullough, it was the first building in America designed to exalt the national spirit, in what would come to be known as the Federal style. Lâ’Enfant would later work on the creation of Washington DC from Maryland swampland and be fired from that project by George Washington. 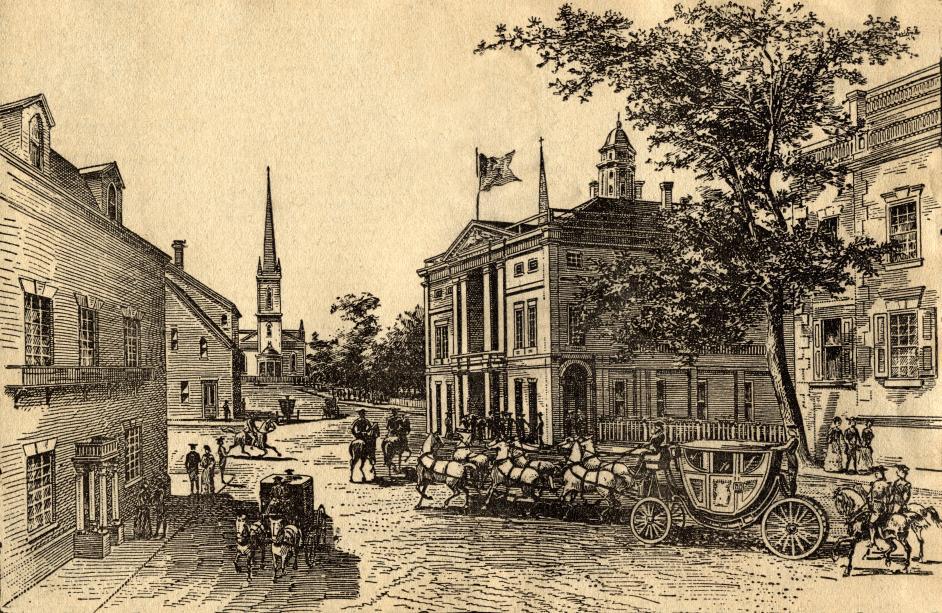 3. George Washington was first inaugurated here on April 30, 1789. The King James bible he was sworn in with — property of a New York Freemason lodge — is still at Federal Hall.

The Freemasons bible used in the inauguration of George Washington (as well as Eisenhower, Jimmy Carter and George Bush)! #ohnywknd

4. The original Federal Hall was torn down in 1812 when city administration moved to the new City Hall.  Its materials were sold off to make other buildings in the city.

Below: Wall Street in 1825 without a Federal Hall, either old or new! 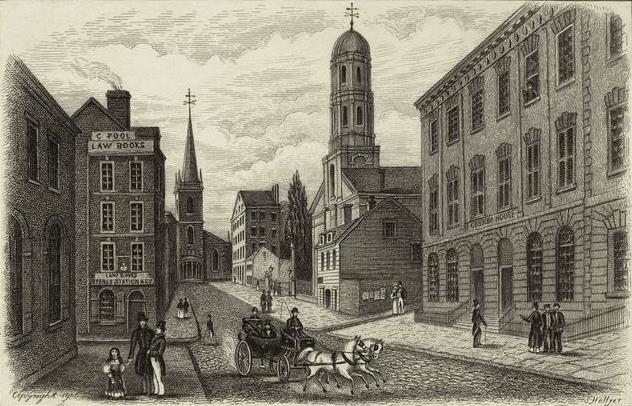 5. The current Federal Hall is actually the original U.S. Custom House which opened in 1842, replacing a structure used for that purpose at 22-24 Wall Street.

6. The offices of the Custom House again moved in 1855, and the building was used as the U.S. Sub-Treasury building. In 1913 it became the first place in New York to buy the original buffalo nickel.

7. In 1918 Charlie Chaplin and Douglas Fairbanks famously drew thousands to the steps of Federal Hall to promote the sale of war bonds. Later that year doughnuts were auctioned off from its steps as a war fund-raiser. 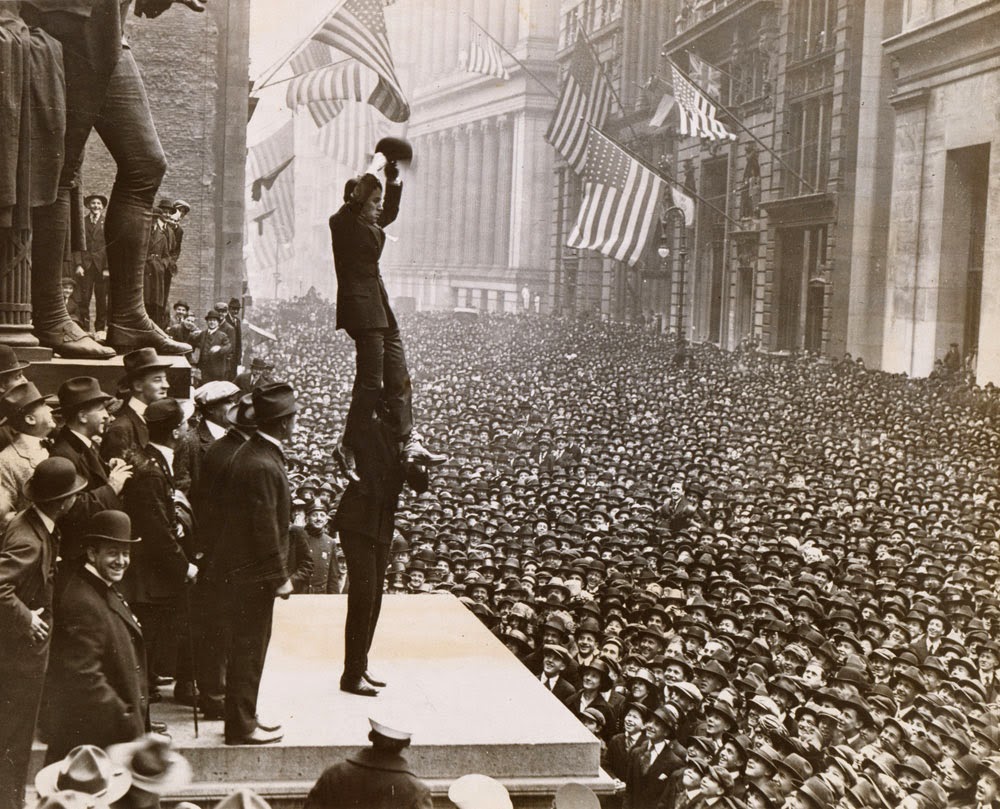 8. In 1920 a wagon full of dynamite exploded across the street from the Sub-Treasury, killing 38 people in what is today still an unsolved mystery.

9. The Sub-Treasury had moved out by the 1930s, and the building was officially re-opened as the Federal Hall Memorial Museum in January 1940. It was inspired in part by America’s celebration of the 150th anniversary of Washington’s inauguration. The 1939-40 World’s Fair presented a replica of the original Federal Hall even after an earlier version of Federal Hall in Bryant Park failed to attract visitors.

10. Federal Hall received a massive renovation in 2006 after the collapse of the World Trade Center in 2001 weakened the foundations of the building.

Check out the official announcement at the website for the National Trust for Historic Preservation.

Top image by the Wurts Brothers, taken in 1908. Courtesy Museum of the City of New York

Hi! Enjoyed the Federal Hall blog post. For #9, if the building reopened as a memorial museum in 1940, wouldn’t that have been to commemorate the 150th anniversary of Washington’s inauguration, not the 225th? I think we would’ve celebrated the 225th last year in 2014. Either way, great blog and podcasts. Keep up the great work!